By aardvarchaeology on February 4, 2014. 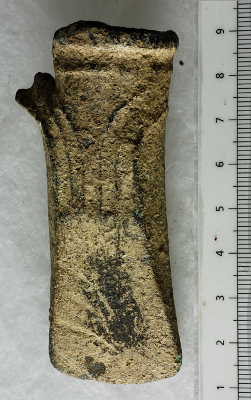 I've started to assemble pictures and maps for my Bronze Age book. Almost all known objects from deposition sites in the Lakes Mälaren and Hjälmaren areas have already been illustrated elsewhere. But here's an exception: a socketed bronze axe found before 1963 in a bog at Eklunda in Bred parish, near Enköping, Uppland province. It's 3,000 years old, dating from Period IV, 1100-950/20 cal BC.

Axes like this were fitted onto hafts shaped like a V with one very short arm, and held in place by a string or strap through the little lug near the base – which is damaged in this case. The verdigris covering the bronze suggests that the bog had been drained and ploughed for years before the axe was found. Wet sediments prevent such corrosion.

When Evert Baudou collected the material for his PhD thesis in the 50s, this type, A2a, was mainly known from northern Zealand and eastern Funen, but there was also a casting mould from Västergötland. Finds since then are unlikely to have changed the distribution pattern much. The axe from Eklunda was probably an import piece. I have no detailed information about where the find spot is, but judging from the results of my studies, it is likely to have been in or at a Bronze Age lake or sea inlet which later silted up and became a bog. There's an endless discussion about why people parted with bronze objects in this manner. I believe they did it primarily to communicate with supernatural beings.

The axe is inv. no 11,863 in Västmanland County Museum. Big thanks to Susanne Granlund for the photograph.

Would it be possible to reverse the corrosion by running a current through the object? Or would the result just be amorphous gunk instead of a neat alloy surface?

It's been tried. Sadly you don't get an object of the original shape. You get an object roughly of the already known corroded shape, only made of metal instead of corrosion products.

There is one other (unique so far AFAIK) very sophisticated hafting method from Chertsey.
It's difficult to see in the pic., but the socket for the shaft is ovalled to prevent twisting, as in modern iron tools, any hammer, for instance; the shaft grain is arranged so that the growth rings (ash, naturally!) are perpendicular to the line of strike (flexible in that direction, prevents shock a bit and stops it warping offline), and the extra-hard (oak ) head armature is tapered away from the shaft-hole in both directions, like a whetstone.
I made a repro ages ago, and it totally transforms the feel and precision of the ubiquitous socketed axe into a serious, heavy, accurate bit of carpenter's/fighter's kit, the "tail" makes all the difference, like a pterosaur's head!
The bronze is just a hard "bit" or edge to it, like the iron shoe on a mediaeval shovel.
If I were them, I'd have carried a few ready-sharpened spares on my belt too, for a day in the woods. Hence the loop, as it would be daft to jam the metal part on too tightly, just rely on the lashing and maybe a rag of cloth as a shim, to hold it on the backswing. Gives you the option of switching to an adze mount (wider blade, even?) for the finishing as well, provided the axe has a reasonably squarish socket.
Verdict: a well-thought-out, economical and highly portable multi-tool.

Here's a clearer photo which makes it look less of a messy lump of bogwood.

That interpretation makes sense, although it is probably impossible to prove. If you put bronze items in a lake or a bog, it sounds sensible to me that they are ment as some kind of sacrifice. At least it would be stupid to deposit things in such an inaccessible place if you just want to store them for a few months and get them back thereafter.

PS I have a hunch that the composite hafting (so *convergently* reminiscent, for functional reasons, of mesolithic flake-axes stuck in an antler sleeve, or some neolithic ground ones) didn't get drawn/sculpted is that one solid whack in the right place would have easily disassembled it, much to the wielder's embarrassment, in actual combat.
If I was in a fight, I'd much prefer to be left holding a substantial hockey-stick-like thing, even without the bronze armature, than a mere wand of ash. Since fighting seemed to equal glamour, and was unavoidably common, whereas craft was rarer and a bit dull TBH, nobody bothered to memorialise or "sacrificially" deep-six the technical models, just the hooky branch ones. Plausible speculation?

@Dustbubble: One of the problems is we do not really know which of the bronze axes/swords/daggers were really used as weapons- and which were tools or simply pretty shiny metal things for Bronze Age show-offs.
Or as another student put it (for fun, but true, indeed):
http://lolmythesis.com/post/71587356307/prehistoric-weaponry-may-not-ha…

Aye Julia, that's where use-wear analysis helps. And the other half of the picture, cutmarks on (mainly) wood. At one point about thirty-forty years ago, there was a disbelief that for example bronze shields of Yetholm type were any good for anything, apart from making a loud noise. Turns out, some were, some weren't.

You are right, dustbubble. But you should also find injuries fitting to the weapons. Which can get difficult in periods in with cremation is common.
If you have worked on replicas, you can probably tell a lot more than many archaeologists working on the pictures.
So far, many archaeologists do not really agree what was used how. Well, it would get a bit boring if we knew everything yet.