Spent two happy days at the LinCon 2016 gaming convention in Linköping. 1500 gaming geeks of all ages from newborn to dotage, and with a very good gender balance. The only age/gender demographic that was visibly missing was old women. But brown and black people were sadly almost entirely absent. My own main complaint though was that for the first time neither of my kids came along to the convention.

This year I didn't learn any new games, but I taught a couple and I took part (rather ineptly) in a little Blokus tournament. Here's what I played, all enjoyable games that I recommend. 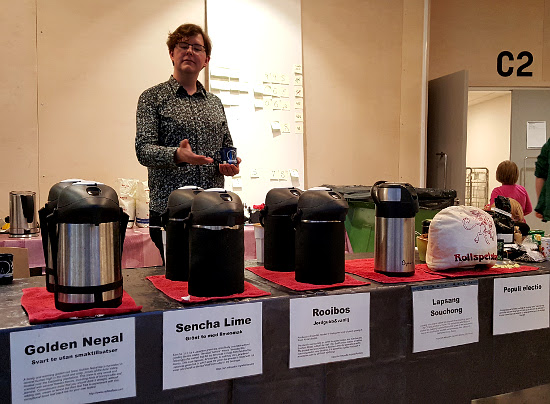 Aaah, it warms my heart to see that there's still a string tea presence at LinCon (for my sins, I ran the LinCon kiosk 1994-1996 (I think)) and I certainly used to be a regular, some 20 years ago.

Did you see any evidence of Rollspelsbaren?

There were a lot of role-playing activities this year, and one may have been named Rollspelsbaren. Check the convention web site!