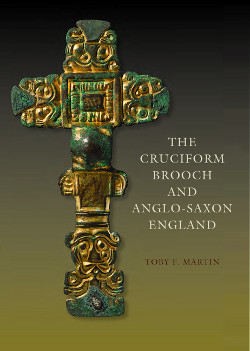 Back around Christmas I reviewed the first three chapters of Toby Martin's big book about Anglo-Saxon cruciform brooches. Those are the technical chapters dealing with typology and chronology, and I loved them. They are rock solid. Now I've read the remaining four chapters that deal with the societal interpretation of the brooches. In the following I am going to use the author's given name because Martin is me.

I think Toby's investigations and interpretations here are excellent. I particularly like his painstaking study of how the cruciform brooches relate to osteological age and sex, and to the cremation versus inhumation rites. Also how he emphasises that his three typological periods for the brooches aren't just a convenient dating instrument, charting some kind of blind typological drift. Toby insists quite rightly that the phasing is evidence that people's ideas about these brooches changed rather dramatically. A phase A brooch from AD 450 meant something completely different to its owner and observers than a phase C brooch would in AD 550.

So I have no complaint about the meat of this study. But I am rather unhappy with its packaging. Chapters 4-7 suffer considerably from theoretical bloat. Toby is rehashing a lot of theoretical arguments that have very little bearing on the matter at hand and are largely quite old. One might call it decorative theory. It looks like Toby is signalling to a certain type of reader who is more interested in theory than in Anglo-Saxon England. His book is a worse read for it.

See for instance the intro to chapter 4 on page 129. It is completely divorced from the concrete reality of Anglo-Saxon England. Everything on this page would apply equally well to Bronze Age China. Or see p. 205-208, where Toby recounts 25-year-old fringe arguments from someone who thought that biological sex (as distinct from social and symbolic gender) is not a natural dichotomy. And then he shrugs the whole thing off and says that for the present intents and purposes, it's all about osteological sexing anyway so the distinction is moot! My opinion about the 1990 paper that Toby references is that true, there are a few hermaphrodites out there, but they are far less common than people with only one leg, and we nevertheless assume that people in the past generally had two legs. It's not something he needed to cover.

Then there's Ian Hodder's old 80s chestnut “material culture is active”. I have always felt that this tenet of post-modern archaeology is rather vacuous. People repeat it endlessly but it doesn't actually change the way they argue about the past. The symbolic potential of material culture was after all not discovered in 1982. Toby however is ambivalent. A few times he repeats the tenet for decorative purposes, but then on p. 231 he suddenly says “The objects were capable of nothing by themselves.” And he's so right! People make objects which transmit messages and other people are later influenced by these messages. Mental culture is not divorced from its material correlates. This however does not mean that material culture is active, any more than the words I address to my kids are active. I am an agent. “Please empty the dishwasher” is not. And nor is the dishwasher.

I really like Toby's discussion (p. 146) about phase B brooches (AD 475-550). They combine discrete types of head, bow, foot etc. rather freely. And the finds of lead master models not for entire brooches, but for these separate anatomical parts of brooches, indicate that the artisans actually constructed their repertoire of brooch designs much the same way that Toby has himself constructed their typology.

Toby repeatedly states that he doesn't think cruciform brooches were recycled for metal very often (e.g. p. 133, 142). His main argument for this position is that a considerable proportion of the brooches we find in graves and in the ploughsoil show evidence of wear and repair. This argument holds no water. Recycled brooches are invisible to us. We can never know what proportion was recycled, nor how common in was for old, worn, repaired brooches to get recycled. He shouldn't have taken a position on this issue IMO.

Toby demonstrates neatly and painstakingly that during phase A (AD 420-475) the brooches were worn by girls and women of every age, on their dresses. Then during phase B they were worn mainly by women aged over 25, on their cloaks. In this society, women usually died between age 26 and 40: clearly phase B cruciform brooches were part of a matronly role. Now, I may have missed Toby saying this, and I will change this review if it turns out that he has, but I don't remember him commenting on the situational difference between a dress and a cloak. Your dress is only visible indoors, in privacy. You wear your cloak over it, outdoors, in the public space. So with the start of phase B, the cruciform brooch not only becomes restricted to older women with a certain amount of power, but also to their public personas away from home.

I really, really don't like the use of the word “traditional” (e.g. p. 228) to describe the established consensus view on a scientific issue. It suggests that the consensus view is old, unexamined, uncritically accepted, poorly founded. And that the author knows much better than his “traditional” forebears. In fact consensus views in science are only achieved through a lot of hard work and discussion among very smart people. The next time Toby is tempted to call a viewpoint traditional, I suggest that instead he refer to the works of scholars who have sided recently with that view in the literature.

Toby mostly uses the word “elites” in contexts where it is ambiguous whether he means several groups or several people. But occasionally (e.g. p. 189) he slips and shows that he thinks that me and my buddies can be “elites” (if we weren't actually bolshy proles, that is). This is like calling a football player “a team”. Very ugly error.

Final words, repeated from the first review: it is my firm belief that future work on English cruciform brooches will strictly be footnotes to Toby Martin. He should be a model for us all in how he deals with small finds!

In the RSS feed, I first parsed that as Tony Martin. Who? He once sang with Black Sabbath, who are also noted for cruciform symbols.

Yes, he's not as well known as Ozzy, Dio, or Gillan, among those who have sung for Sabbath. Once he stage-dived into the audience and security wouldn't let him back on stage, not believing that he was the singer. Must have been a real blow to his ego!

Once he stage-dived into the audience and security wouldn’t let him back on stage, not believing that he was the singer.

There is a song on the new Paul Simon album with a similar theme.