We spent Thursday afternoon backfilling. As I write this, only trench G remains open, and the guys there expect to finish soon. Here's some highlights of what we've learned during our second week at Birgittas udde.

Trench A in the outer moat demonstrated that the moat had a wide flat bottom, was not very deep and contains no lake sediments. Probably always a dry moat, providing material for the bank behind it. No Medieval finds.

Trench C in the inner moat demonstrated that this moat too had a wide flat bottom, but it was deeper and is full of hard clayey sediment: seems to have held shallow water. No datable Medieval finds. 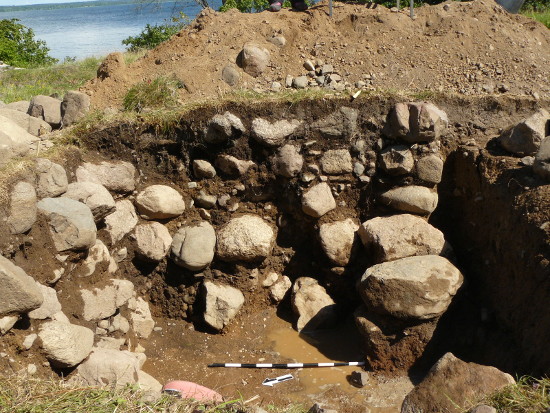 Trench D inside the inner defensive bank demonstrated that the site has been used for quite some time and rearranged: the stone pavement proved to be the top of a deep fill used to obliterate a rectangular cellar with drystone walls. Apparently this is the cellar of an early building that has been replaced by the large mortared masonry cellar that dominates the site today. It would have saved considerable labour to extend the cellar instead of replacing it, which suggests that this was the stronghold's main building that couldn't be torn down until its successor was habitable. Disappointingly, no Medieval finds in or under the stone fill. 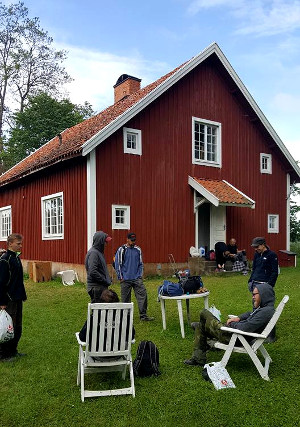 Morning wait before we pile into the cars and go to the site.

Trench F demonstrated the same general trait of the site as trench D: there are two generations of two house foundations here, all in all four. No further Medieval finds after the glass shards and the coin.

Trench G at the northern end of the western line of buildings has given an iron latch lifter (that is, a simple key) and a spread of stones that suggests the building's northern gable may have consisted of a drystone wall.

Let's summarise what we've learned so far. Birgittas udde has quite a long Medieval use history where at least three buildings in the inner bailey have been replaced with newer versions. The high nobility makes its presence known not only through the fortifications and the large intricate masonry cellar, but also through a broken imported drinking glass. The complete absence of pottery in eight (or nine) indoor and outdoor trenches, though, suggests that waste management was quite fastidious, or that the site was never inhabited for very long each time, or both. This supports an interpretation where Birgittas udde is a special-purpose site for threatening situations, a fortified retreat in a peripheral location on Ulvåsa manor's land. And the main Medieval version of Ulvåsa manor is at Gamlegården, the long-lived unfortified site abandoned in 1580.

A few decades ago a badger family dug a large sett next to the big cellar and dumped their spoil into it. The level floor left by the restoration architect in 1924 has had a big ugly spoil mound sitting in one corner ever since. At the landowner's suggestion, and with the County Archaeologist's blessing, my team rolled the turf off the mound and lifted it out of the cellar bucket by bucket to backfill the abandoned sett. Despite screening and metal-detecting much of the badger spoil, we made no Medieval finds. Another piece of restoration we've done is to give the intact piece of corridor vaulting over the cellar's entrance a much-improved turf cover. This will keep rain from leaching the mortar out of the arch, improving its longevity.

On the 9th we're moving our headquarters to Stegeborg camp ground & hostel. On the 10th a number of new team members will join to replace people who are only with us at Birgittas udde. And on Monday the 11th we break turf at Skällvik Castle. Stay tuned, Dear Reader!

My completely amateur thought about this is that while medieval buildings never were what we'd call comfortable, fortified ones - built for defense, not comfort - were much worse than the rest. Nobody with the means would have wanted to live their daily lives in a stronghold if they could avoid it. Also, forts would be located where they were easy to defend, not necessarily where it was easy to conduct any day-to-day work.

Or are there other reasons to split things up like this?

Neither of the settlement sites at Ulvåsa had a big draughty cold stone keep. The defences at Birgittas udde consisted of two bank-and-moats. Housing standard was probably rather high at both sites.