A reader emailed me a fun question from a physics exam he took, along these lines:

A car driver going at some speed v suddenly finds a wide wall at a distance r. Should he apply brakes or turn the car in a circle of radius r to avoid hitting the wall?

My first thought was that surely the question wasn't doable without more information, but it turns out that we do have enough to give a straightforward answer. Let's take the "turns in a circle" and "slams on brakes" scenarios one at a time.

Turns in a circle:

Since we don't have any numbers to plug in or really anywhere else to go with this, we're done with this part. The required acceleration to avoid the wall is equal to the square of the speed divided by the radius of the circle, which is just the initial distance to the wall.

This one is a little more involved. The direction of the velocity is not changing, but the speed is. Another of the key equations of freshman physics is the formula for position in uniformly accelerated motion. It's:

where a is the acceleration, v0 is the initial velocity, x0 is the initial position, and t is the elapsed time. In this case we'd like to solve for a at the point where x = r (we define our coordinates such that x0 = 0). But we don't know how much time has elapsed by the time the car reaches the wall, so we need the formula for velocity in uniformly accelerated motion, which we might write from memory or find by differentiating the position equation if we know calculus:

Now I'll start subscripting the letter f on the specific time when the car reaches the wall. We know that we've come to a stop at at that time, so we have:

Don't worry about the negative sign. a is itself negative (we're decelerating), so tf will be positive as well. Now that we know how much time has elapsed when the motion is complete, we can plug that into our position formula:

Remembering that at the wall, x = r and that we defined x0 = 0. You can do the algebra to solve for a, and you'll find that 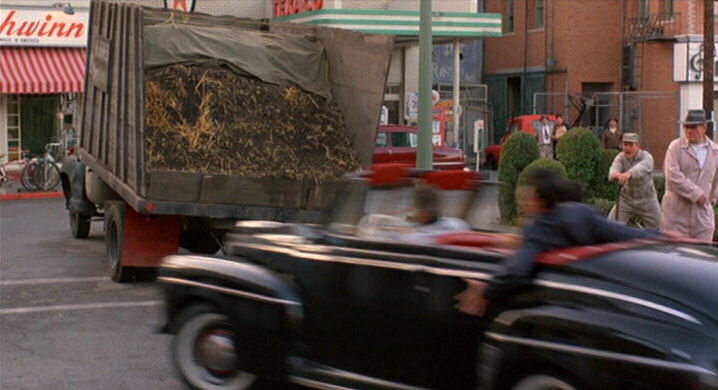 From Back to the Future - Biff shoulda braked...

After writing this post, I came across a ScienceBlogs post on Dot Physics a few years ago on the same subject. He approaches the problem in a different way, and I think it's well worth reading both solution methods.

The analysis assumes that your sudden maneuver (turning, braking, or some combination thereof) doesn't send you into a power slide. That may be reasonable where you live, but in snow country, or places like California where oil buildup during the dry season makes for really slick conditions when the rains finally do come, you can't count on that. Which makes the advantage to braking that much greater.

As someone who learned to drive in Florida and moved to snow country as an adult, "make no sudden maneuvers, especially in snow or icy conditions" is something I have internalized. Above all, try not to get into a situation where you have to use the brakes and the steering wheel at the same time. And remember that while your all-wheel drive will help you go, it won't help you stop.

One complication is that if you can execute a 180 while braking you'll have much more crush space between you and the wall. That would probably be difficult for anyone but a seasoned stunt driver, but given that the whole situation is hypothetical it deserves consideration.

Just notice that the magnitude of your acceleration is fixed and as soon as you turn the component pointing away from the wall goes down. That solves it without any calculation.

I wonder whether there may be some situation, perhaps facing an obstacle not quite as wide as "a wide wall", in which turning the steering wheel and applying the brakes sensibly together gives an advantage over only using the steering wheel without breaking, or only breaking on the straight.