New high resolution near infra-red spectrograph, designed to find earth like planets in the habitable zone around low mass cool stars, is funded by the National Science Foundation

Penn State Awarded $3.3 Million to Build Instrument for Finding Planets in Habitable Zones Around Nearby Stars

University Park, PA -- A new state-of-the-art instrument -- a precision spectrograph for finding planets in habitable zones around cool, nearby stars -- is being developed at Penn State with support from a new $3.3-million grant from the National Science Foundation. "This new Habitable Zone Planet Finder instrument will allow us to detect the existence of planets that are similar in mass to Earth and also are in orbits that allow liquid water to exist on their surfaces," said Suvrath Mahadevan, assistant professor of astronomy and astrophysics at Penn State and a co-principal investigator of the project.

The Habitable Zone Planet Finder (HPF) is a large infrared spectrograph that will be used to analyze the components of starlight and to detect the slight motions of nearby stars caused by the gravity of orbiting planets. It will be approximately the size of an SUV, and will weigh over two tons. "We have designed the HPF to be able to efficiently observe small, cool stars, which are by far the most numerous types of stars in the Milky Way galaxy," explained co-principal investigator Lawrence Ramsey, professor of astronomy and astrophysics.

"These stars, which have temperatures far below that of the Sun, radiate very little of their energy in the visible part of the spectrum, so we must create an instrument that can capture the infrared part of the spectrum -- where the unaided human eye cannot see but where these stars are brightest," Ramsey said. The team chose to observe these stars because they offer the best opportunity for finding planets with solid surfaces in the so-called "Habitable Zone" around nearby stars, the range of distances from a star within which temperatures might be right for liquid water. 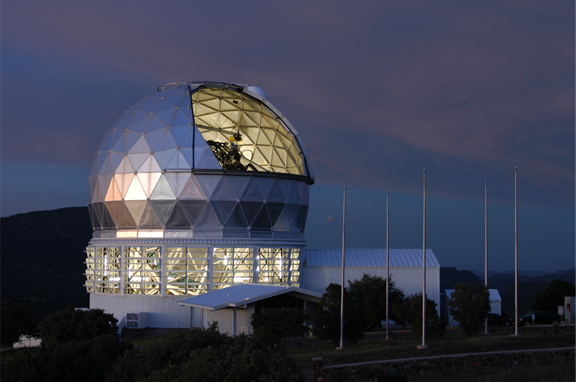 The instrument will take three years to build. When it is completed, it will be shipped to the Hobby-Eberly Telescope at McDonald Observatory in west Texas to begin its multi-year quest for new worlds, during which it will survey more than a hundred nearby stars. "This instrument will precisely measure the motion of each star, hunting for the telltale "wobble" caused by an orbiting planet," said Penn State Assistant Professor Jason Wright, a co-principal investigator on the HPF team. "Once we detect these wobbles, we will be able to infer the surface temperature and mass of the planet or planets orbiting it. These cool stars we are targeting are some of the very closest to Earth. In astronomical terms, they are in our back yard."

Associate Professor Steinn Sigurdsson, who is also a lead investigator of the Penn State Astrobiology Research Center, said "The HPF is a significant step toward discovering terrestrial planets in orbits where liquid water may be present on their surface around our closest stellar neighbors. This goal is important for the NASA astrobiology program since life, as we know it, needs liquid water. Nearby planets with liquid water on their surface are the first place to start looking for signatures of life on other planets."

Because the planets the astronomers are looking for are so small, and the stars they are looking at are so cool, they need to build a new kind of planet-finding instrument. "To find an Earth-like planet around one of our target stars requires that we be able to measure the velocity of a star, located at a distance of tens of light years from the Earth, to a precision of about three feet per second -- the typical speed a person walks -- over a period of several years. To attain this goal, HPF not only must have high-efficiency optics and detectors, but must be maintained in an extremely stable environment," Ramsey explained.

Mahadevan said the HPF team is keen to embark on this challenge. "I do believe we now have the technological capability to make these extremely precise measurements in the infrared," he said. "Finding Earth analogs around our nearest neighbors will be an exciting adventure. We are grateful to have had prior support since 2005 from the National Science Foundation, the NASA Origins program, and the NASA Astrobiology Institute for the technology development that lead to our now being able to develop this instrument."

The HPF development-and science team also includes Penn State Evan Pugh Professor of Astronomy and Astrophysics Alex Wolszczan, discoverer, in 1992, of the first planets ever found outside of our solar system, and director of Penn State's Center for Exoplanets and Habitable Worlds; Distinguished Professor of Geosciences James Kasting, who performed some of the first calculations on Habitable Zones around stars; Mike Endl and William Cochran, researchers at the University of Texas; Fred Hearty of the University of Virginia; Penn State Postdoctoral Fellows Chad Bender and Rohit Deshpande; as well as former Penn State graduate student Stephen Redman and current graduate student Ryan Terrien.

The William P. Hobby-Robert E. Eberly Telescope - one of the largest and most powerful telescopes in the world -was conceived in the mid-1990s by Lawrence Ramsey, former head of the Department of Astronomy and Astrophysics at Penn State, and Daniel W. Weedman, then a professor of astronomy and astrophysics at Penn State. The Hobby-Eberly Telescope (HET) is located at the McDonald Observatory in a remote area of West Texas, where night skies are among the darkest in the continental United States. The Hobby-Eberly telescope was built by a partnership of five universities: the University of Texas at Austin; Penn State University; Stanford University; and two German universities, Georg-August University in Goettingen and Ludwig-Maximilians University in Munich.

And that is pretty cheap for such a complicated instrument on a large telescope!

Sophisticated would have been a much better word there, just, um, sayin'.

Looking forward to the results!

Many congratulations Steinn! How will HPF compare to HARPS?

Very cool, nice to see a US telescope get an instrument like this. What's the stability, 1 M/S or less?

Congrats! (and it looks as though a couple of people are pretty much assured of either tenure or a better job elsewhere....). This is such a very competitive field that it's my guess that the relative simplicity of this instrument was a big plus.

If the Penn state researchers are successful in this project, it could yield some outstanding information. This along with the Webb will hopefully provide more information than we were able to obtain on the visible light spectrum.