Bárðarbunga is arguably the scariest of the 30 or so active volcanoes in Iceland.

Extreme volcanoes don't always have extreme eruptions, but they are scary because they have the capability for extreme events, uniquely so. 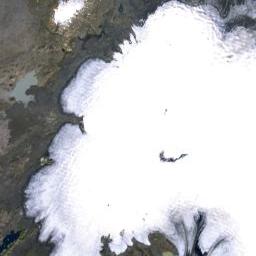 It is not the most active, it is not the tallest, it may possibly be the biggest in some sense, but it is the volcano which gave us the largest eruption on Earth since modern humans started trying to get organized: the Þjórsárhraun eruption about 8,500 years ago. 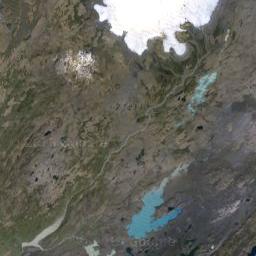 Þjórsárhraun - upper part, the lava flows all the way to the sea to the south west. The dark lava in the lower right hand corner towards the lake is the path (it is actually younger lava on top of the old flow, from same general system of volcanoes).
- from Google maps[/caption]

That eruption pumped out about 30 km3 of lava.

Bárðarbunga has erupted a number of times in historical times, and, given very limited data, seems to undergo a sequence of eruptions roughly every few centuries.
It is not a simple volcano, but rather a complex around a central crater on the north atlantic ridge as it runs across Iceland.

The central crater is a 2,000 m peak, the second tallest on the island.
It has a ~ 50-100 km2 oval caldera, which is about 700m deep and covered with an ice cap.
The caldera seems to have last erupted in 18th century, it is hard to tell, since large volcanoes can have small eruptions, and if the lava does not breach the ice, it would not necessarily have been clear which volcano was erupting, or even that there was an eruption, before modern seismographs etc.

In addition to the main caldera, there is a system of fissures to the northeast, along Dyngjuháls, where there have been relative frequent, relatively modest fissure eruptions, and to the southwest, towards Veiðivötn, where the very largest historical eruptions have taken place, most recently in 870 and 1480 AD.
The latter are the bad, "everybody dies" kinda eruptions...

Starting a week ago a lot of small earthquakes started popping off under the ice cap at Bárðarbunga - about one per minute, still going, mostly magnitude 1-2, with occasional 3-4 shakers. These are mostly moderately deep earthquakes, 5-10 km below ground, and well localized, if you look at the maps in the links below you see they are in two groups and move in time.
One set of earthquakes is under the main caldera and seems to mover around the center of the caldera, the other is drifting northeast and up to the surface, forming about a 25 km line towards the edge of the glacier.
The earthquakes are accompanied by moderately strong harmonic tremors, roughly 1 Hz vibrations. There was also a small rise in conductivity in Jökulsá á Fjöllum, the main river running from the glacier to the north.
The volcano is also bulging, the whole area, maybe 100 km across, has risen moved [strictly speaking the area didn't so much rise as separate - it moved laterally - net movement is now more like 20 cm!] about 5 cm over the week, as measured by GPS sensors.

What is happening is an injection of magma, molten rock, from below the volcano into the chamber under it. There is not enough room for it, so it is cracking the rock and forcing it open. The caldera is blocked by a "cork" of solidified lava, and the weight of ice, some magma is trying to force its way up around the edge of the caldera other magma has flowed off through fissures in the rock to the north east forming a 25 km subsurface dyke.

The lava from this system is generally fairly fluid as icelandic lava goes and very gas rich, and usually particularly loaded with nasty toxic gases, including, notoriously, hydrogen fluoride.

The system is under metered - it has not been studied long, is hard to get to and is big. The amount of magma in this injection is 1-200 million cubic meters, or 0.1-0.2 km3. Not a lot on historical scales, but a lot compared to some recent eruptions in other volcanoes, and the total magma in the chamber is easily 10-100 time more than that.

Well, it could just stop.
The new lava cools, and we wait for the next injection.

Or, it could erupt.
It could be a small eruption, even so small it does not even breach the ice, or it could be big.

An eruption would probably be immediately preceded by several magnitude 4-5 earthquakes as the lava cracked the final few hundred meters of crust and forced its way to the surface.

A reduction in the number of small earthquakes may be worrying if there is an increase in the number of bigger earthquakes and a change in the pattern of location of the quakes.
There'll be a lot of geologists peering at the 3D rotations of time slices of those earthquakes (see below) trying to figure out where this thing is going.

It could be an explosive eruption, from a caldera, with ice vapourizing a lot of lava and fine ash flung high into the stratosphere, or it could be a long fountaining fissure eruption.
Or both.

It could be over in a few hours or days, or it could go on for months or years.

The dangers, in order:

1) a flash flood from the ice melting.
This is most likely, and most likely to go to the north.
Warning time is hours, it could be spectacular or it could be catastrophic and landscape transforming, depending on how much ice melts and how quickly.
I helped build a couple of the hydrology stations (V289 is go!) along Jökulsá á Fjöllum - those would be toast in a flood... :-(

If the flood goes south and west, the hydroelectric power stations and dams are at risk as well as farms and roads on the more densely populated south coast.
Bárðarbunga can go either way, though the trend is looking north (except for a recent small turn to the west in the caldera tonight).

2) explosive eruption with ash spreading high and far.
This will happen if lava breaches the caldera or a new caldera forms along the dyke under the ice and a lot of lava contacts the ice above rapidly.
It could be as bad, or worse, than Eyjafjallajökull, though aviation authorities claim to understand the ash transport and risks better now and would not restrict flights as broadly as back then.
Ash can lead to temporary cooling and crop damage, and can be transported on continental scales.
Current winds would carry ash south and west east mostly, over the British Isles, France, Germany and either into eastern Europe or up into Scandinavia, though that can change.

3) prolonged fissure eruption - the main danger there is both extensive lava flow, but more seriously, very large volumes of nasty gases.
These can lead to multi-year temporary cooling on continental scales, with associated disruption of weather patterns, direct damage to crops and even acute toxicity in extreme events.

It is mildly reassuring that the tremors in this episode have been moving north east, suggesting any fissure eruption might be in the generally less extreme group of cracks on that side. It is hard to know though, since anecdotal accounts of historic eruptions suggest small eruptions in one direction can suddenly become large eruptions in different parts of the system with some lag time - we definitely see triggering in modern eruptions as earthquakes and pressure changes let other parts of adjacent systems release.

The bigger more extreme events are less likely in any given event, but one reason Bárðarbunga is one of the volcanoes Iceland keeps a very close eye on is that it is one of the few that is big enough to be extreme.

Interesting times.
Lets hope it fizzles, or just blows off a bit of steam with a nice little "tourist eruption" with some photogenic plumes and fountains of fire.

live update of earthquakes in the last 24 hours in Iceland

The sounds of earthquakes...

Thank you for the clearest explanation I've read so far. We're heading to Iceland from the US on September 15 so I'm reading everything I can find.

Good article. Thank you for posting it. You presented a lot of solid facts. As this situation unfolds I hope you will continue to post your views. With a little luck this may pass. maybe this is an uplift event or resurgence of the caldera floor.