The human eye is sensitive to a portion of the electromagnetic spectrum that we call visible light, which extends from around 400 to 700 nanometer wavelength, peaking in the general vicinity of greenish light at 560 nanometers: 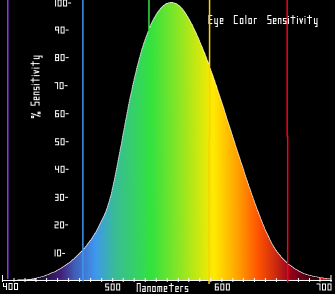 Here's the intensity (formally: power per area per unit solid angle per unit wavelength - whew!) of the radiation emitted by an object with the temperature of the sun, plotted as a function of wavelength in nanometers according to Planck's law: 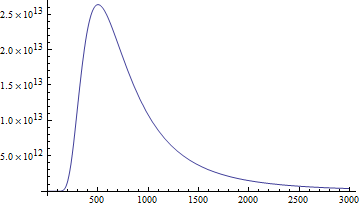 You'll notice it also peaks around the same place as the spectral response of the human eye. Optimization!

Or is it? That previous equation was how much light the sun dumps out per nanometer of bandwidth at a given wavelength. But nothing stops us from plotting Planck's law in terms of the frequency of the light: 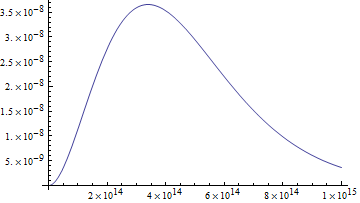 In this case what's on the y axis is power per area per unit solid angle per frequency. Ok, great. But notice it's not just the previous graph with f given by c/λ. It's a different graph, with different units. To see the difference, let's see this radiance per frequency graph with the x-axis labeled in terms of wavelength: 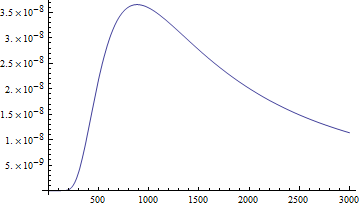 So what gives? Is the eye most sensitive where the sun emits the most light or not? The simple fact of the matter is there's no such thing as an equation that just gives "how much light the sun puts out at a given wavelength". That's simply not a well-defined quantity. What is well defined is how much light the sun puts out per nanometer or per hertz. In this sense our eye isn't optimized so that its response peak matches the sun's emission peak, because "the sun's peak" isn't really a coherent concept. The sensitivity of our eyes is probably more strongly determined by the available chemistry - long-wavelength infrared light doesn't have the energy to excite most molecular energy levels, and short-wavelength ultraviolet light is energetic enough to risk destroying the photosensitive molecules completely.

This wavelength/frequency distribution function issue isn't just a trivial point - it's one of those things that actually gets physicists in trouble when they forget that one isn't the same thing as the other. For a detailed discussion, I can't think of a better one than this AJP article by Soffer and Lynch. Enjoy, and be careful out there with your units!

Some insect eyes don't have the large amount of free water inside them, and have a shorter distance from outside the eye to the imaging surface, and so can adapt to a wider frequency range, but when your eye is a bag of mostly water the size of a grape, it'll have a frequency response not terribly far from that of humans.

Matt Springer: "So what gives? Is the eye most sensitive where the sun emits the most light or not?"

It isn't at all clear why it would be necessary to have the sensitivity peak at the same place.

Put another way, it might be more useful to have the sensitivity peak somewhere other than where the sun emits the most light.

A couple of colleagues of mine recently wrote a paper on exactly this subject, arguing for a different pedagogical presentation of blackbody radiation. I haven't read it all that carefully, but it seems worth plugging here.

I like it. It makes much more sense than most presentations.

Similar to what chad's colleagues suggest wouldn't it be more appropriate, in the case of eye development, to compare the photon flux of relevant light sources (in this case the sun) with the energy dependent quantum efficiency of the eye? Anyone knows how that would look?

I should check it myself, but the one-year-old pulling in my arm thinks otherwise, so I'm just throwing out the suggestion.

I believe I missed something in your reparameterization of B(T). Why does one version have lambda^-5 while the other has nu^3? This does not work if lambda*nu = c.

Nevermind, the wikipedia page shows the differential relation for the reparameterization...