So, August rolls in and who would have thought in early May we'd still be talking about the Chaiten eruption with such intensity. Jorge Munoz of the SERNAGEOMIN is wondering whether the current eruptive activity and seismicity at Chaiten is a precursor to the end of the "first cycle" (as he calls it) of activity that started in May or that this is all leading up to another major explosive eruption (the "plugged volcano" scenario). The most puzzling part of the current activity is the high amount of seismicity: 105 earthquakes over the last few days, some of them up to magnitude 4. The question becomes: is this magma moving, or volatiles collecting under a "cap" in the volcano's conduit/plumbing system (or, well, both)? If it is magma moving, we might be seeing the system getting a new input of magma to feed the ongoing, almost continuous ash eruptions. If it is pressure building, then we might be seeing the prelude to another large explosion that could (I repeat could) take out the new dome entirely.

We really don't have a good idea of the timescales of these giant rhyolitic eruptions, i.e., how long between the initial eruption and a potential cataclysm event like a caldera collapse. The reference points we do have - Krakatau (although not rhyolite) or Katmai, Alaska - suggest that it can take only a matter of days. However, there is also evidence, such as at Santorini in the Aegean Sea, that the initial eruptions/activity could be years before the "big one". Chaiten might be taking the middle road - or it just might be setting itself up to eruption away for months without ratcheting up to a caldera-forming event.

While we're on the subject of Chaiten, I wanted to mention a great set of pictures from the area around the eruption on Photovolcanica (thank you to Richard Roscoe). There are some real stunners (see below) of the havoc wreaked by the ash fall, flooding, lahars and pyroclastic flows, along with the state of Chaiten and the towns neighboring the volcano. It is well worth it if you want to see what the region around the volcano has gone through over the last few months. 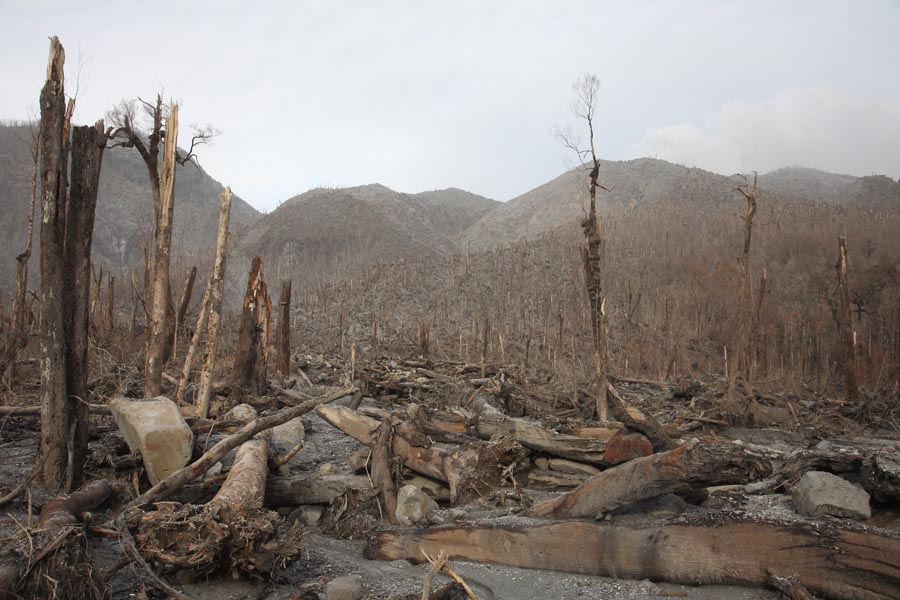 Chaiten in Chile erupting in January 2009. Even after over a year of activity, Eruptions readers are still captivated by the volcano. Thanks for sending me your questions about volcanoes and volcanism. I'll try to tackle some hear - but as always, keep the questions coming! Send them to For those…

One year of the anniversary of the Chaiten eruption

Chaiten erupting in May 2008. Image courtesy of ONEMI. Speaking of anniversaries, this weekend is the one-year mark for the Chaiten eruption (in spanish) in Chile, the first eruption at the volcano in ~9,000 years. Yes, indeed, the rhyolite eruption that caught most everyone by surprise is still…

Chaiten slowing down, but not stopping.

Although the mainstream media seems to have lost interest in the Chaiten eruption beyond the "human interest" (or should I say "salmon interest") aspect of the eruption, there is still a lot going on at the volcano. The SERNAGEOMIN recently released this excellent photo of the erupting caldera:…

Looking inside the structure of the Yellowstone Caldera

With all the talk of the current Yellowstone earthquake swarm, I thought it would worth it to write a post on the the structure and caldera - and why we get earthquake swarms that are structurally rather than magmatically-related. First off, lets think about why calderas formed. This is relatively…

No doubt, the Flip Ultra HD wins by a mile. Got one myself and am VERY happy so far..