"Either you repeat the same conventional doctrines everybody is saying, or else you say something true, and it will sound like it's from Neptune." -Noam Chomsky

Except back before it was discovered, the very idea of Neptune... well... sounded like it was from Neptune! 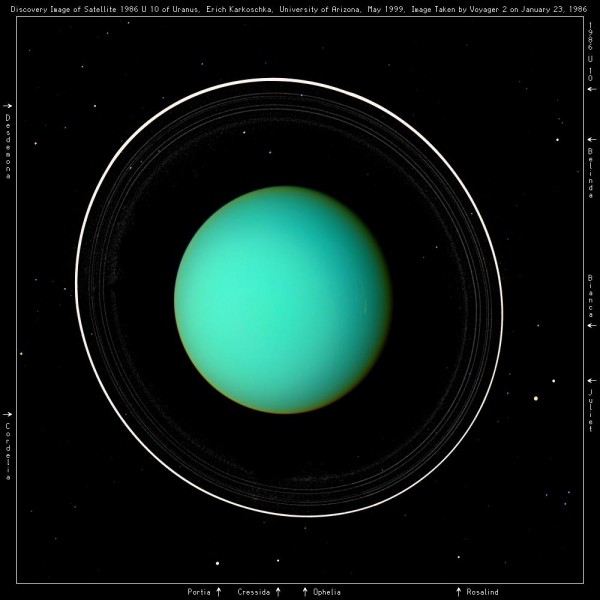 The planets out to Saturn are visible with the naked eye, and have been known since at least the time of the ancient Greeks. While the telescope was first invented in the early 1600s, it wasn't until 1781, nearly 200 years later, that the next planet -- Uranus (above) -- was discovered.

But unlike the other known planets, Uranus was doing something very weird. Specifically, it wasn't obeying Kepler's Laws of planetary motion!

More specifically, it wasn't obeying the second law: the one that states planets sweep out equal areas in equal times as they move in ellipses around the Sun.

Sure, the other planets all do, but Uranus? For the first two decades, it moved too swiftly, later it slowed to move at the predicted speed, and finally, in the 1830s and 1840s, it started moving even more slowly than Kepler's Laws predicted. 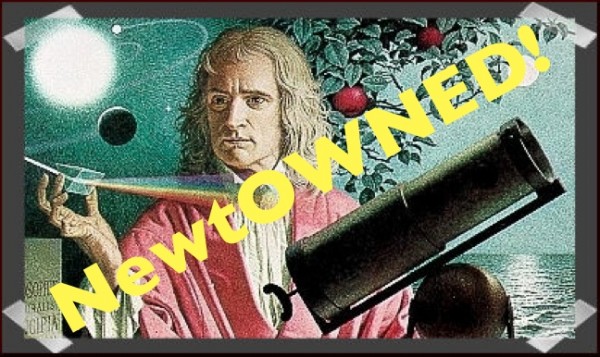 Well, some people believed that Newton's Law of universal gravitation -- the law from which all of Kepler's Laws can be derived -- might be wrong for Uranus. After all, it had never been tested out at distances past Saturn; perhaps things were just different over there.

Perhaps there was another planet, out beyond Uranus, that was causing these changes in speed. Perhaps the gravitational force of this additional, as-of-yet undiscovered planet was pulling on Uranus: pulling it faster when it was ahead, pulling it slower when Uranus passed it in its orbit. 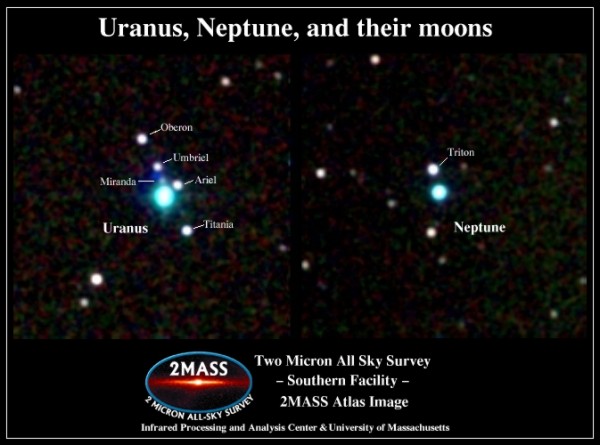 When Urbain Le Verrier published his predictions of where such a planet would need to be on August 31, 1846, the world took note. On September 23, his letter arrived at Berlin Observatory, and that very night, Johann Galle and his assistant, d'Arrest, pointed their telescope towards the exact location Le Verrier predicted.

(A rich account of the story can be found here.)

And -- less than 1 degree off from his prediction -- the new planet was discovered. With an orbital period of nearly 165 years, Neptune takes twice as long to orbit the Sun as the next longest planet, Uranus. Think about that. Nearly 165 years for one revolution, and it was discovered on September 23rd, 1846. 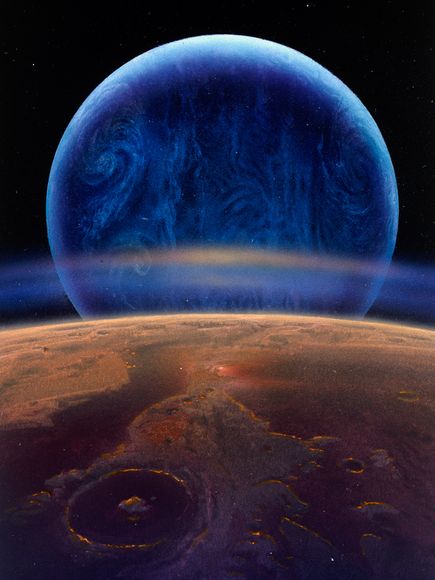 Last night, at 22:47 Universal Time, Neptune completed its first complete orbit around the Sun since humanity first discovered and identified the eighth and final planet in our Solar System.

Its 18 billion mile journey -- sweeping out an area 900 times greater than Earth's orbit -- was completed, as far as humanity is concerned, yesterday. 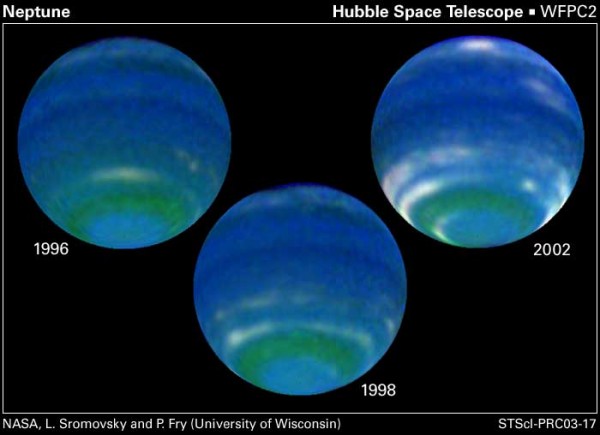 Neptune, despite being a "small" gas giant, holds one distinguished record for our Solar System that is unlikely to be broken: wind speed. 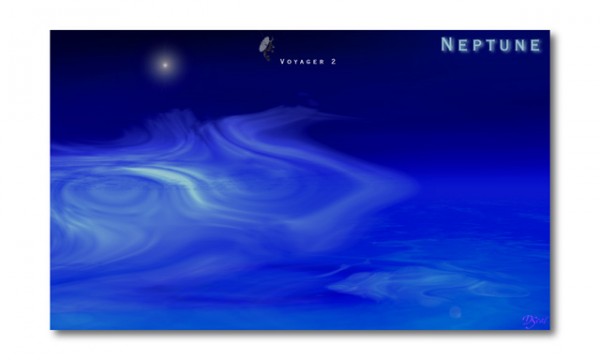 With a raging storm on its surface -- the size of the entire planet Earth -- known as the "Great Dark Spot" (as compared with Jupiter's Great Red Spot), Neptune's atmosphere sees wind speeds up to 2,400 km/hr (1,500 mph). 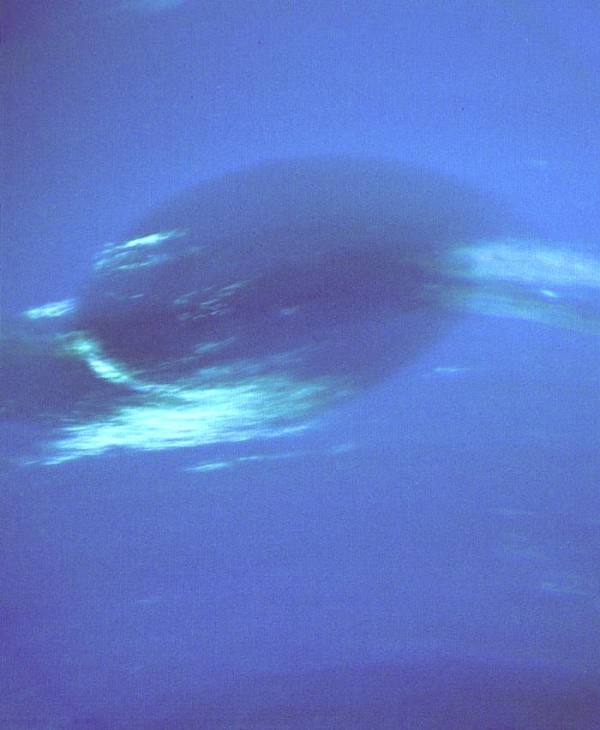 The spot seems to have no problem migrating, as it disappeared in 1994, only to re-emerge in the Northern Hemisphere under a new name: the Northern Great Dark Spot. We think this spot is generated from completely internal processes on Neptune; Neptune's surface receives 160% more energy from its own core than it does from the Sun! 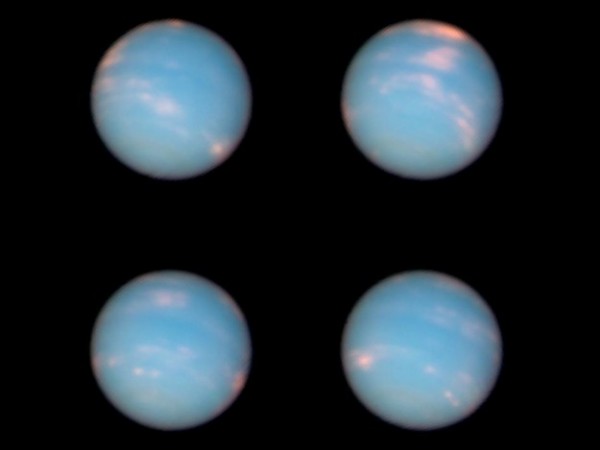 So here's Neptune's birthday pictures -- released yesterday -- courtesy of (who else?) the Hubble Space Telescope. After 18 billion miles (or 28 billion km), this marks the last planetary "first birthday" we'll (likely) ever have in our Solar System, and for those of you Pluto-philes who cannot wait for Pluto to complete its first orbit, keep waiting. You've got until 2178 until that happens.

I don't care if Pluto got kicked out of the planet club by those astronomer bullies! In 2178 I'm throwing it a first birthday party anyway!

I just wanted to say how much I enjoy reading your site, and how well written it is.

I have only just started reading some astronomy material after encouraging my wife to watch the movie Contact with me recently. My wife had never seen the movie before, whereas I saw it when it first came out in 1997 and thought it was great.

The opening sequence of the film is so inspiring, and being reminded of it after so many years had me going to Amazon to order a selection of Carl Sagan books, and one by Brian May and Co. called "Bang!: The Complete History of the Universe".

I'm looking forward to seeing your future posts, and browsing through your back catalog too.

Thanks for taking the time to explain things in a language that everyone can understand.

In the 2010 post, why the dismissal of Adams' work? That's like dismissing Leibnitz in favour or Newton, or Franklin in favour of Watson and Crick. Relevant work isn't irrelevant because the person didn't get to the finish line first.

In blogging terms, dismissing Adams sounds a lot like posters who shout "First!" as if that were an accomplishment. (It's especially laughable when "first" posts appear second.)

In 2178 everyone who was raised and taught in school that Pluto was a planet will be dead. I doubt "dwarf planet" will be anything but a foot note. No one will be bringing up the 1 year anniversary at that time.

Sorry Pluto, we killed your birthday.

another great post Ethan. Thank you. Every child should be taught that math discovered a planet.

Ethan, it has something along the lines of this thread to do with it, but you may just enjoy reading the nuttery gone into here:

Happy birthday, Neptune! You're looking so beautiful after all these orbits.

"The planets out to Saturn are visible with the naked eye, and have been known since at least the time of the ancient Greeks. While the telescope was first invented in the early 1600s, it wasn't until 1781, nearly 200 years later, that the next planet -- Uranus (above) -- was discovered."

Uranus's maximum visual magnitude is 5.32. Therefore, it is also visible to the naked eye.

Since it was visible to pre-telescope, pre-electric light era observers, and since plenty of ancient people looked at the stars, lots of them must have seen Uranus. It just looked like a star to them.

"Uranus's maximum visual magnitude is 5.32. Therefore, it is also visible to the naked eye."

Not any more, worst luck.

Note: Uranus was spotted by Gallileo (IIRC) and recorded, but never checked to see if it wandered.

Neptune's discovery at that time was happenstance, because Uranus happened to be passing it at that time. What if Uranus had passed forty years earlier? Would it have taken another 60-80 years to find Neptune because it's gravitational pull wouldn't be noticed? Or would telescopes have improved enough between 1850-1900 for it to be found on its own?

It's very much like the Earth's magnetic polarity. By happenstance, civilization and science began at a time when the Earth had two long-lasting magnetic poles we label "north" and "south". What if we had become aware during the thousands of years when the magnetic poles were in reversal? How differently would civilization have developed if there would have been no stable poles, thus the compass never invented or used for navigation?

No, I'm not forwarding any pro-religious crap. Such happenstance can be likened to your number coming up in roulette. If you play long enough, and your number will come up a few times, but only the fool ignores all the misses.

This an awesome post. As simple and effective as one can get.

IÂ´d like to ask you if you authorize the full translation and posting (with the pictures) of this in my blog. IÂ´m a science journalist.

IÂ´ll give you the full credit, of course.

Gratz from an avid reader in Brazil.

Of course you have permission to translate and re-post with credit attributed! And although I appreciate you asking permission to do so, in the future, consider the permission implicit.

But even here in the dumb South, we know that just because it was discovered 165 years ago, doesn't mean it wasn't already making orbits.