Not much in volcano news, however a lot of earthquake news this morning.

Did anyone else notice that two M6+ earthquakes occurred last night within one minute of each other last night (eastern daylight time)? The first was in the Banda Sea near Indonesia at 01:51:19 UTC (M6.8), the next was in northern Qinhai in China at 01:52:06 UTC (M6.2). I'm guessing that is just the sort of coincidences that occur when you have thousands of earthquakes globally a week, but still an interesting coincidence. There was also a series of earthquakes, all less than M3.7, last night in Oklahoma of all places. Not exactly in a hotbed of seismic activity. 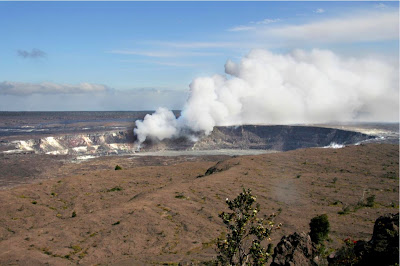 Back in volcano-related news, Hawai'i 24/7 has a post about how the USGS/HVO goes about sampling the ash emitted from the Halema`uma`u Crater. The short answer: buckets. The fun facts in the article include estimates of the amount of ash and lapilli emitted since the Halema`uma`u eruption started last year:

Not bad. It shows that at Kilauea, most of the ash/lapilli ejected comes from the big events (over 80%) -- so any time you see ash/lapilli layers in the rock record for a basaltic volcano, you might really be seeing very discrete events rather than a long period of activity. That is why observing the modern can unlock the past.

Your "a series of earthquakes" link goes to Page Not Found.

Thanks for catching that Cicely ... It was a missing quotation mark. Should be fixed now.

Interestingly, every single one of the eight earthquakes near Oklahoma City occurred at the exact same latitude and longitude--35.566 -97.29--in what looks like a business parking area of some sort. What the heck?

@mjkbk: Most of the time you'll get some movement from pretty much the same place every few minutes and that sort of activity can go on for days or weeks. If the events were separated by many months or years then that would be less usual - but you also need to keep in mind that the exact epicenter usually cannot be determined from the seismometer recordings with any great accuracy.

Fun with math: the chance of having two magnitude 6 or greater earthquakes occur with a minute of each other (ignoring triggered earthquakes) is about 4% per year.

Many thanks for sharing this fantastic article. Please keep up this blog as itâs one of my favorite blog in my reader, thanksinscrieri manuale in directoare