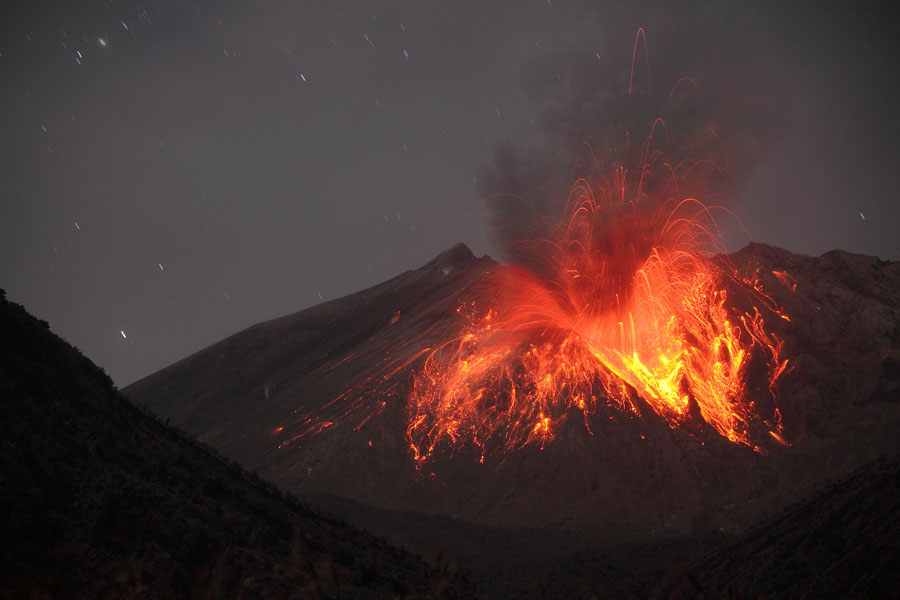 Sakurajima in Japan, erupting in December 2009. Image courtesy of Photovolcanica.com

Richard Roscoe at Photovolcanica.com has just posted two great sites focusing on two of the most active volcanoes in Japan: Sakurajima and Suwanosejima. These volcanoes are almost constantly erupting with small strombolian events punctuated by occasional plinian eruptions.

Sakurajima is on the island of Kyushu (well, technically Kagoshima, but right off the coast of Kyushu) less than 10 miles / 20 km from the city of Kagoshima. The volcano has been erupting since 1955 with both explosive and effusive products - some quite large, up to VEI 3. In January 1914, Sakurajima had a VEI 4 eruption after almost 100 years of quiet. The area near the volcano, including Kagoshima, was buried in ~1.5 km3 ash and tephra, with thousands of buildings destroyed from the weight of the tephra fall. If you feel like seeing what's up at Sakuajima, you can watch its volcano-cam.

A map of the most active volcanoes of Japan.

Suwanosejima is further south in the Ryukyu Island along the Japanese arc on Suwanose Island. It, too, is a very active volcano, with the current eruptive cycle starting in 2004, but prior to that, it erupted almost every year since the early 1990's. It tends to favor strombolian explosions that are smaller (VEI 1 and 2) than Sakurajima. However, a a series of large eruption in 1813-14 caused people to abandon the island. That eruption produced pyroclastic flows and lava flows that ranked as a VEI 4 eruption. It had a second VEI 4 in 1889, but since then the eruptions have been smaller.

I'm fascinated by Sakurajima..its present activity might be relatively harmless (though who knows how long that apparent stability will last?) -but it's a permanent health hazard anyway to the people of Kagoshima, the city has the highest incidence of silicosis in Japan, probably from the frequent dustings of ash.

Somewhere (if I can find it!) I have an old bound volume of National Geographic -early 1920s??- with a long and vivid account of the 1914 eruption

Just a big thanks for you linking to the remote control camera at Sakurajima - I watched (and controlled the camera for) my first LIVE volcanic eruption that I have seen. Much better then the old Mt. St. Helen's volcano-cam. I hauled the other science teacher into my classroom along with any students still roaming the campus and we watched the volcano as well as Japan wake up and start a new day from here in Texas. Simply outstanding.

Excellent website on Sakurajima volcano and ash depositional impact on nearby watershed:

I live in Kagoshima and have not seen a collection of photos as nice as those made during their trip. Luckily for them the volcano is erupting so often, over 500 times in 2009 and I hear over 100 times already in 2010. Luckily winds haven't blown the ash to the city so often.

You'd think that living here I would have tons of chances to photograph eruptions. The volcano can be seen from Shiroyama Hotel, just up the hill from my place. With work and daily life you turn your head and say, hey the volcano erupted. Too bad I am at work... or too bad my camera is at home etc. I was planning to go make nighttime eruption photos last week. Now, I am absolutely hyped to go. I should mail Roscoe and ask specifically where he made a few of the photos. I will be going by scooter and probably freezing my butt off the nights I go out;)

Oh, you should click on the x5 webcam since you get 5 webcams of the volcano on the same page. Beside the x5 webcam is a photo every minute video for the day so you can see the volcano from sunrise to sunset as a movie one photo per minute. Something happened to the camera a few months back so the quality is pretty bad at the moment but it is still cool.

I have been looking good details about this topic for a while and I gotta say you put up offers me some basic thought about my paper I'm gonna write for my assignment. I would like copy a few of your words here and I hope you don't mind. Thanks. I'll reference your work of course. Thank you.Keep updating the great posts. will come back.