I had to go to Washington DC/Bethesda last week for a short conference.

I spent almost the entire time pooping, thanks to some food poisoning I got from a very expensive, universally recommended restaurant. YAY!!

Luckily I wasnt sick when Francis Collins was supposed to speak. But he had to cancel.

So while Im not leaving my bed and sucking down bottles of Powerade and Gatorade (its room temperature, I dont care, I feel like crap, get it, LOL!), I do have two links to pass along.

1-- Though Collins bailed, I did get to see a very nice presentation on the basics of epigenetics from a gentleman from Harvard. He warned everyone right off the bat that if we did epigenetics research, the presentation was going to be below them, but I stayed anyway to see how he presented it. It was very nice, woo-free, basics of the science. Probably still way over a lay-audience, but I thought it was just perfect for a group of grad students/post docs/PIs from diverse fields.

One thing he brought up was this research Carl Zimmer just wrote about! Carl, as always, really gets what he is talking about, and tries to impart that to his audience. This last paragraph is friggen perfect:

The possibility that we can rewrite the epigenetic code in our brains may be exciting, but it is also daunting. Modifying epigenetic markers is not easy--and that's a good thing. After all, if our methyl groups and coiling proteins were constantly shifting, depression would be the least of our problems. Nothing ruins your day like finding that your brain has turned into a pancreas.

Epigenetics is a new, confusing, complex field of research. We might 'know' that X modification of histones is associated with Y disease, but there is not much we can do about it, currently. And even if we think we might be able to do something about it, its like, popping a party balloon with a V2 rocket. Um, yeah, itll probably work, but its kinda overdoing things, and you still might cause more trouble than its worth, and you still might miss.

Lemme give you an example. Lets say we find out that in people with Ke$ha Disease, their GTiM (Good Taste in Music) gene is underexpressed due to hypermethylation of the surrounding DNA. So, YAY! Thats treatable! We have drugs that could fix that, like 5-aza-2'-deoxycytidine!

Um, well, your DNA is also methylated at lots of other positions for very good reasons. Like, keeping mobile and parasitic DNA silent.

Accidentally turn your brain into a pancreas?

This stuff is really hard, and Carl gets it.

2-- While pooping or waiting to poop again, Ive kept my spirits up by reading this blag. I want to be angry that no one told me about this blag before the end of last week, but I really needed some cheering up RIGHT NOW, so it all worked out.

This is pretty much a blonde me right now. 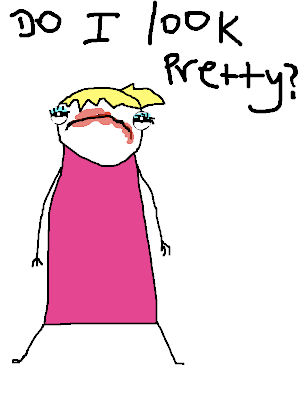 Here's another fun blog while you're recovering. Scotteriology. Sample: http://scotteriology.wordpress.com/2010/06/16/bs-carnival-liiivxi-even-…

Warning: the author is a bible studies student. However, he seems pretty cool, and even has a link to Ship of Fools on his site. He makes fun of kooky evangelists and such.

I take it you're going to punch the next person who suggests you "loosen up a little?"

Please don't consider turning my brain into a pancreas when I tell you to reconsider blaming the restaurant; we've had another outbreak of Norovirus along the Eastern seaboard. The last major wave was in the winter, so I guess we've been due.

Please don't consider turning my brain into a pancreas when I tell you to reconsider blaming the restaurant; we've had another outbreak of Norovirus along the Eastern seaboard.

I'm sure that would be a lot more comforting if norovirus weren't primarily transmitted via the fecal/oral route.

In microbiology, you learn to accept the reality of fecal-->oral transmission very early.

Ugh. Sounds miserable. Nothing like being violently ill while on the road. I hope you feel better soon. Some of the worst bouts of "pooping" have come from eating at some of the "best" restaurants. Sigh...

In microbiology, you learn to accept the reality of fecal-->oral transmission very early.

You guessed it. Right down to hair loss and a year to recover.

Funny -- I was just rereading the childhood fish story before I came here ...

LOL, I like your example. :D Ke$ha Disease FTW!

@Abbie: sorry to hear you are feeling miserable. I had something very similar years ago when I came back from Spain, and lost 15 lbs in a week. While I'd love to do that now (as long as I could keep it off!), back then I didn't have an extra 15 lbs to lose. Keep hydrated and get well soon!

In microbiology, you learn to accept the reality of fecal-->oral transmission very early.:-/

Sometimes... it's
forgivable to go ass-to-mouth.

Washington DC nauseates me as well.

Just be thankful you didn't have to listen to Francis.

What was this foul restaurant?! I live near DC and I want to know if any of my friends have been hyping this plague-promoter.

I donno, Abbie. Considering all the discomfort you and your kind have caused E. coli over the years, it's only fair that the little fellows should have their revenge.

I was all excited to come home from boxing, have a whole series of posts Imma gonna write (sexy ERVs!) and now I fucking cracked off a chunk of one of my molars chewing a god forsaken Tootsie Roll pop.

You broke a tooth on a tootsie roll pop?

I must be some kind of mutant because I've crunched probably 1000 gobstoppers and all I've got to show for it is obvious-to-tongue-tactile-but-not-visual-inspection wear on my right molars O.o

This tooth has been cracked for over 5 years (my first filling, was really big and cracked the tooth). Its been worrying new dentists ever since, so really, this was just a matter of time.

Hope you feel better..
Did you, by any chance, stop by (i work here) NMNH!?