What I Did on My Summer Vacation, Part One

I'm back! Did I miss anything?

The big summer vacay turned out to be much harder work than what I was doing in Virginia prior to leaving, but it was tons of fun nonetheless. Far too much to report on in just one blog post, so we'll do a few.

Of course, the first order of business was to participate in the World Open chess tournament in Philadelphia. 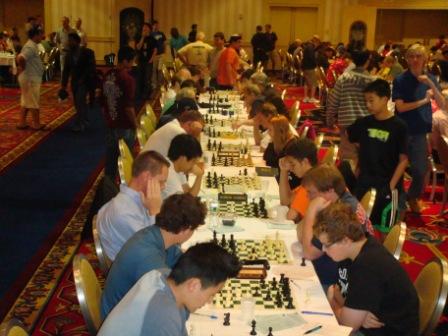 No one seemed to mind that I was standing on a chair while taking that picture.

Since the World Open offers the largest cash prizes of any open chess tournament, it routinely attracts some of the top players in the world. One of the great things about being a chess fan is that I can get right up close to the big boys. For example: 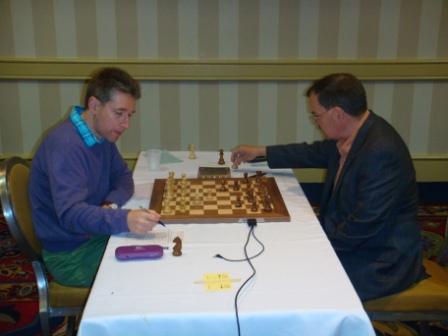 That's Michael Adams of England playing white against Jan Ehlvest, formerly of Estonia but now living in the US permanently. Both gentlemen have, at various times, been among the top ten players in the world. They were just two of the many famous players at the tournament.

You might have noticed that the chess board they are playing on has a big wire coming out of it. That allows the board to sense each move that has been played. That information is then transmitted automatically to a different room, where the moves are projected onto a wall. People can then follow the games in real time: 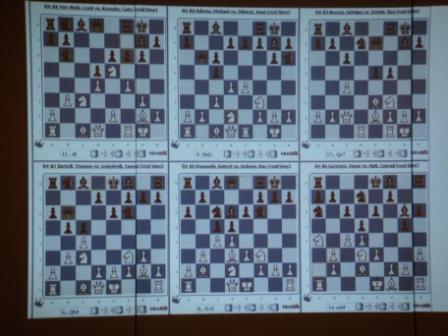 The Adams-Ehlvest game, which Adams went on to win, is the second one on the top.

Of course, we lesser mortals deserve some attention too. In the next photo, the fellow with the cap is my good friend Doug Proll. I've been playing chess with him for about twenty years. Here he is defending the honor of the Winawer Variation in the French Defense. 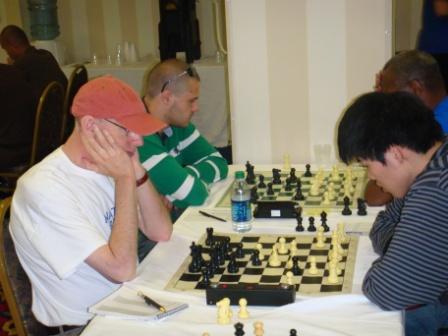 Part of the fun of going to a tournament like this is catching up with people. My friend Jon Edwards, formerly the United States champion in correspondence chess, was also on hand. It was great catching up with him, but, sadly, I never got around to snapping a picture. But you should rush on over to Amazon to buy his latest book. It's called Sacking the Citadel: The History, Theory and Practice of the Classic Bishop Sacrifice. The bishop sacrifice in question is the one where you play Bxh7+ (or Bxh2+, if black is playing the sack) to destroy the protection of your opponent's castled king. If you don't know what I'm talking about then perhaps the book isn't for you.

I managed to play some interesting chess. My final tally was four wins, one draw and two losses. Not enough to win any money, alas, though I was in the running until a little kid beat me in round seven. The tournament is actually nine rounds, but I took a bye in the first round, since I couldn't get a hotel reservation for that night, and then withdrew before the last round, figuring I had nothing really to play for and preferred to spend the time hanging out with my friends. Still, I'm pretty happy with how I played, and my rating will get a nice little boost. Here's an interesting position from my third round game.

I was playing black, and it was time for my twenty-seventh move. The game started out as a Queen's Indian Defense, but quickly transposed to the Benoni. White has just moved his knight from d1 to c3. This was a mistake. He should have played 27. Ra3, which would have protected the pawn on f3. In that case black could certainly claim a significant advantage, since all of his pieces are placed actively and white has several weaknesses to worry about, but white would certainly still be in the game.

But since white's last move left the f2 square unprotected, black now has an effective killshot with 27. ... Nxd5!. The point is that if white takes the knight black will simply play 28. ... Qxf3+. Now the queen and the bishop on d4 cooperate very well, covering all the squares near the white king. With the knight still on d1 white would have the defense Nf2 at his disposal. Anyway, white sheepishly tried to protect f3 with 28. Be2, but this allows the further shot 28. ... Ne3+, after which white resigned. Moving the king permits a queen-winning discovered check with 29. ... Nc4+. Of course, black could also have won easily with 28. ... Nxc3+ 29. bxc3 Bxc3, but my way was cooler.

All in all, a good time. But that was hardly the only thing I did over the last two weeks. Stay tuned!

No, didn't miss anything. It's been pretty quiet around here. Would you like some coffee?

Prof. Rosenhouse missed the brouhaha over the elevator affair of the skepchick, Rebecca Watson, which ended up inveigling PZ Myers, Jerry Coyne, Richard Dawkins, Abbie Smith, and other assorted bloggers. Talk about a tempest in a teapot.

I'm back! Did I miss anything?

The decision came after it was found that the winning engine, Rybka, illegally enhanced its performance by using code from two other engines -- Crafty and Fruit -- without permission.

Talk about a tempest in a teapot.

I saw some of the fracas about the elevator incident. You have well-summarized my own view of the matter.

I hadn't heard about that one. An interesting story!

Love chess but what does it have to do with evolution ?