A Big Month for Chess Fans

For anyone who likes chess, the next few weeks are going to be very good indeed. The United States Chess Championships started today in St. Louis. The first round started a little over ninety minutes ago, but there has already been a strange occurrence. Have a look at this position: 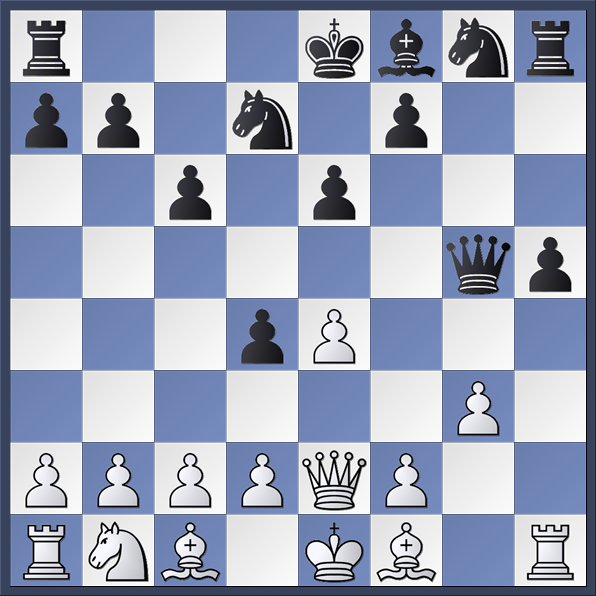 Playing white was Alexander Stripunsky, On the black side was Alexander Onischuk. We are eleven moves in to a very unusual line of the Caro-Kann Defense, with white to move. He uncorked the interesting 12. d3?? It seems natural enough, since it prepares to develop the bishop and attacks the black queen. Alas, white simply forgot that his bishop on c1 is unprotected. He resigned before black could play 12. Qxc1+.

As an amateur player with a long history of making such moves, I always find it a bit comforting to see the grandmasters mess up so badly. I actually played Stripunsky many years ago, in the first round of the U. S. Amateur Team East. He showed up forty-five minutes late due to some problem checking in to the hotel, but still pounded on me pretty good.

But the U. S. Championship is just the opening act! The World Championship begins on Friday in Moscow. Defending champion Viswanathan Anand of India faces off against Boris Gelfand, from Israel by way of Russia. Will I be posting updates? Oh yes, there will be updates...

hah, thanks for posting this. I stared at the position for 10 minutes before I read your comments. All the while I was thinking, well d3 looks tempting, but it's f-ed. So what is white planning here? I'm a lazy and mediocre chess player, but I love chess puzzles.

It IS delicious to see a master goof, isn't it? I suppose that following ...Qxc1 with Q d1 and an exchange of Queens is, in the end, ineffective. And Black could escape entirely with ... Qxb2, getting the bishop for nothing. But still seems a little early to cave.

It's reminiscent of when Kramnik blundered a mate in one. It happens. It was also funny watching the online commentary when it happened. The commentators, Jennifer Shahade and Ben Finegold kept saying things like, “Wait a minute? Did this really just happen? We're waiting for confirmation...”

At the grandmaster level there's just no point to continuing after blundering a piece cold like that.

What a horrible blunder by Stripunsky! Thanks for reporting on it. I hope to see Vishy hold his title.

Black can now force, at a minimum, the loss of a bishop, pawn, and knight plus the white king can be forced off the first rank. White is ****ed.

The 11. d3 here is a really ridiculous blunder (probably the worst I've seen) for a titled player (and a grandmaster at that), it should be a shocker at all levels actually.

I suppose that following ...Qxc1 with Q d1 and an exchange of Queens is, in the end, ineffective. And Black could escape entirely with ... Qxb2, getting the bishop for nothing.

But 12. Qd1 is exactly the move that White would play, because it's his only legal move.

After Qxb2 white can play Nd2

Black can then pin the knight with 14. ... Bb5, and continue to make White's life miserable: the remaining White bishop is not terribly effective, and the queen has to stay put to defend against ... Qxa1. I'm not sure which of these moves is best: Bg2, Bh3, or pushing the f-pawn, but none of them is good (pushing the c-pawn would be a disaster after ... dxc3 threatening either ... cxd2+ if the knight stays put or ... c2+ attacking the queen if the knight moves).

7th, white's position is obviously already horrible after 11. d3 , both materially and positionally . Anyway , after "Bb5 [sic]" , assuming you mean Bb4, white can then skewer black's queen and bishop along the b-file with Rb1 and subsequently Qxa1 is no longer a threat after the queen retreats (the black queen can be made to retreat further with the Rb3 thrust), and a few moves later white can tuck the king in the corner and unpin the knight.

7th, white's position is obviously already horrible after 11. d3 , both materially and positionally . Anyway , after "Bb5 [sic]" , assuming you mean Bb4, white can then skewer black's queen and bishop along the b-file with Rb1 and subsequently Qxa1 is no longer a threat after the queen retreats (the black queen can be made to retreat further with the Rb3 thrust), and a few moves later white can tuck the king in the corner and unpin the knight.

Black still has Bxd2+ there, when Kxd2 is necessary. Anyway, what are you guys talking about. For starters, this position is too hopeless for words, black can just win a piece in one while also exchanging Q's, there is no point in playing on. Maybe at 1600-level people still try to play on here and there Qxb2 is probably the better choice, but for 2000+'s this position is obviously a resign.

It is amazing that the 2700 would miss this.. I don't understand how it could happen too, maybe he wanted to play his Q back to d1 instead of e2 (which he played in the game) and it was at d1 in his mind or something.. Can't think of anything else.

10th, if black has Bxd2+ , then the pin on the knight (as 7th pointed out) no longer exists after Kxd2 recapture. I was simply responding to 7th who quoted a piece of text in my post.

We all know this position is useless immediately after white played d3 as it discovers an attack on the QB and loses it for absolutely no compensation, which I described above (6th) as probably the worst blunder I've seen for a titled player (and should be a shocker at all levels) . In other words actually this is not a 'blunder' but plain absent-mindness, since it doesn't even involve a tactical miscalculation or remotely resemble a complicated position. Maybe Stripunsky just didn't sleep well the night before , hmm?

Stripunsky lost to Kaidanov in the second round, despite having a very strong position for much of the game. It seems like he is pretty off form in this tournament.

Alas, my hero Yasser Seirawan is also 0-2, so it seems he's having a bad tournament also.

Actually, JJ, I have seen worse from grandmasters. An example that was quoted in a book I read about thirty years ago was a game where one of the players left his queen hanging, and his opponent failed to take advantage of that blunder. Also from that same book, a Ruy Lopez opening in which White fell for the Noah's Ark trap. Grandmasters are human, too.

Anyway, the skewer you mentioned is not as effective as you think. After 15. ... Bxd2+ 16. Kxd2 mentioned above, Black continues 16. ... Qc3+ 17. Ke2 Nc5 eliminating the threat of Rb3. Black then has plenty of time to bring up his other knight to press the attack.

@JR thanks for the update, I will check the games out

Hello again Eric, I only mentioned Rb1 against your Qxa1 threat :) . And as you post an analysis which also confirms what we agree on, material+positional damage(i.e. no compensation whatsoever), there's no point in discussing this further as the other guy pointed out. It was all over for white after d3 and he naturally promptly resigned.

Hmm, I would consider this worse than the queen hanging one , considering the absent-mindedness of the d3 push. I mean , the ones you mention must be serious oversights too, but this is just plain daydream-like in a totally uncomplicated position. I've indeed seen and played over some master-level blunders dropping pieces just like that and hundreds of games would fit the bill, but I personally would stick to this game as being 'something else' (As I mentioned in the earlier post, it's sort of strange to even call this one a 'blunder')

Btw, dwelling on a similar theme of astonishing blunders, have a look at this high profile game: Petrosian - Bronstein from the 1956 candidates tourney where Petrosian simply drops his queen (with Ng5??) failing to see it was under attack after Bronstein had played Nf5.

We could also mention the shortest decisive game ever played in a U. S. Championship. The game was Shirazi-Peters, and I think it was form 1983: