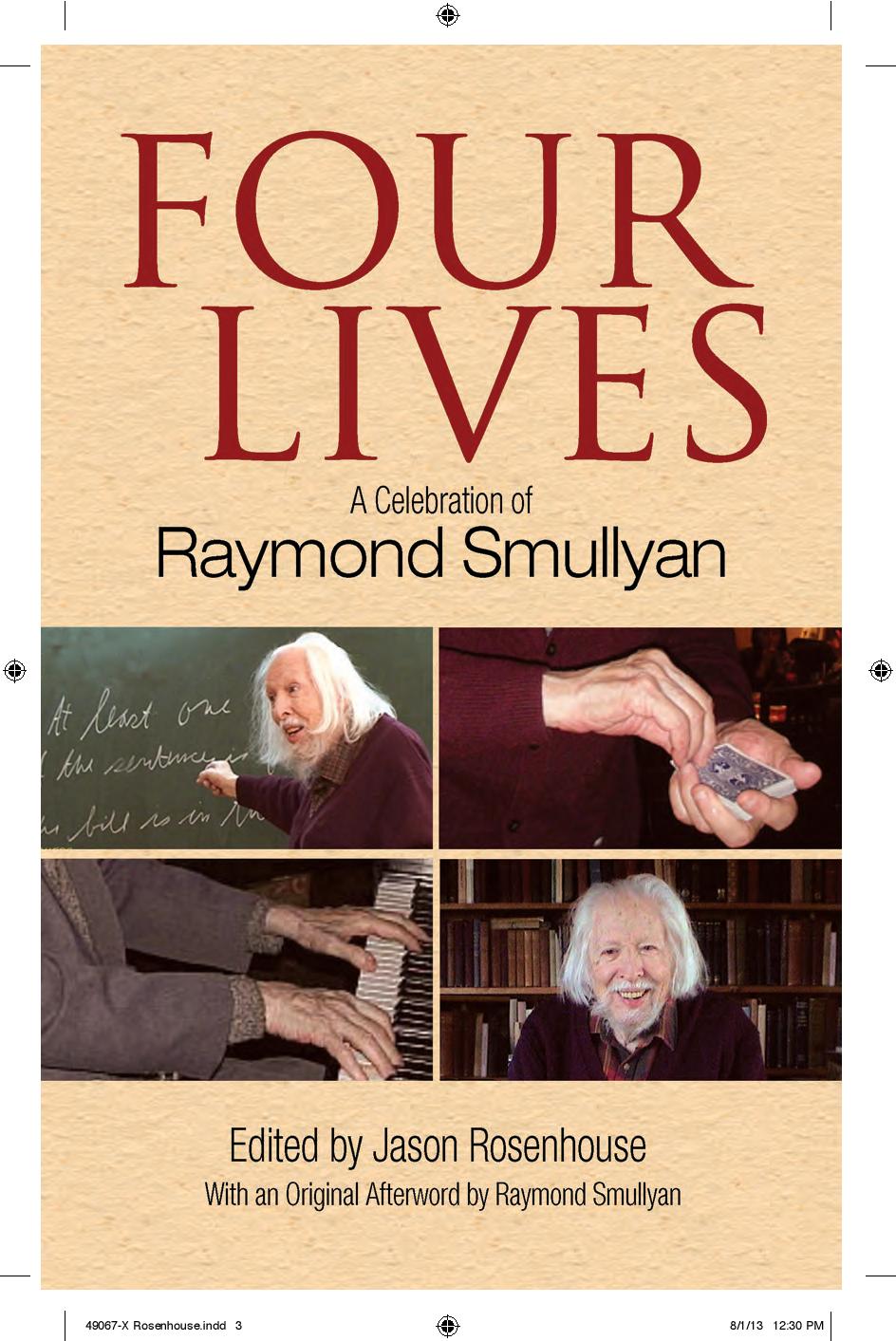 My new book Four Lives: A Celebration of Raymond Smullyan has just been released by Dover Publications. Don't know who Raymond Smullyan is? Well, buy the book and find out! Or you can read his Wikipedia page.

Smullyan is best known for his many books of logic puzzles, but he has also written widely in mathematics and philosophy. He had a big influence on me growing up. I stumbled on to his book What Is the Name Of This Book? when I was about nine, He's currently 95, and he's still churning them out.

So, for me, being asked to edit this tribute volume to him was a bit of a thrill. The book contains three sections. The first is a collection of tributes from his fans, former students, and mathematical colleagues. The second section contains four, somewhat higher-level essays discussing some his professional work in mathematics and logic. This section has contributions from J. Michael Dunn, Melvin Fitting, Douglas Hofstadter and Graham Priest. The final section is a “Best of Smullyan” anthology. I tried to have all aspect of his work represented, but there is particular emphasis on his logic problems.

The “Four Lives” of the title refers to Raymond's incarnations as a mathematician, musician, magician and author. If you have any interest in logic puzzles at all, let me suggest you have a look at this one. At under twenty dollars, we're practically giving it away! (The e-version does not seem to be available yet, but I expect that to appear soon.

WOW! This is great news!... After Martin Gardner, Smullyan is another gem of a popularizer; and with a year+ long celebration of Gardner AFTER his death, so great to see Smullyan get recognized before he ever leaves us (for that great island of knights & knaves in the sky ;-))

I only found What Is The Name Of This Book a few months ago, and I loved it. Will definitely keep an eye out for the e-version of this one.

Congratulations on your new book.

(Note: You have a typographical error to correct in sentence 3: "Well, but the book..." )

well aren't you getting to be the mucky-muck? congrats.

Thanks for pointing out the typo, which has now been corrected.

I just received "What Is the Name Of This Book?" today and looked at the beginning of the book. The puzzles there are delightful. They remind me of some my father gave me when I was young, some of which I solved years later with more knowledge. For example:

When Texas was fighting for independence from Mexico, many people went from Tennessee to join the war. This was the basis for Tennessee’s nickname as the Volunteer State. It also had the collateral effect of raising the IQ of both states.
=-=-=
Police are chasing a car thief who stops and flees into a nearby forest. How far can he go into the woods?
=-=-=
A monk starts climbing a mountain at dawn to the temple on top, reaching it at sunset.
After spending the night, at dawn the next day he starts down the mountain, reaching the bottom at sunset.
Was he ever at the same place on the path at the same time of day on the trips up and down the mountain?
=-=-=
What is common to the sequence: 10,11,12,13,14,20,22,101,1001?