Blogging has been a low priority lately, partly because there's been too much other stuff going on, and partly because I haven't had much enthusiasm for it. The end of the semester is always a bit of a grind. But the long-suffering fans of Sunday Chess Problem should not have to wait another week! So here's a little endgame study I came across, in a terrific book called Endgame Magic by John Beasley and Timothy Whitworth. It was composed by Herbstman and Kubbel in 1937. White is to play and draw. 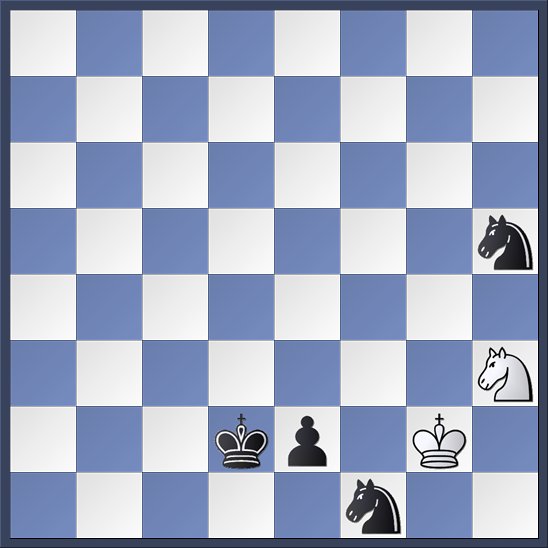 Recall that white is always assumed to be moving up the board, and black is always assumed to be moving down. So the black pawn is poised to promote. Also, when writing down chess moves the vertical files are labeled a--h from left to right. The horizontal ranks are labeled 1--8 from bottom to top. So, in the diagram, the white king is on g2, while the black king is on d2.

Things start innocently enough. Plainly, black cannot be allowed to promote his pawn with impunity. White's only defense is 1. Ng1: 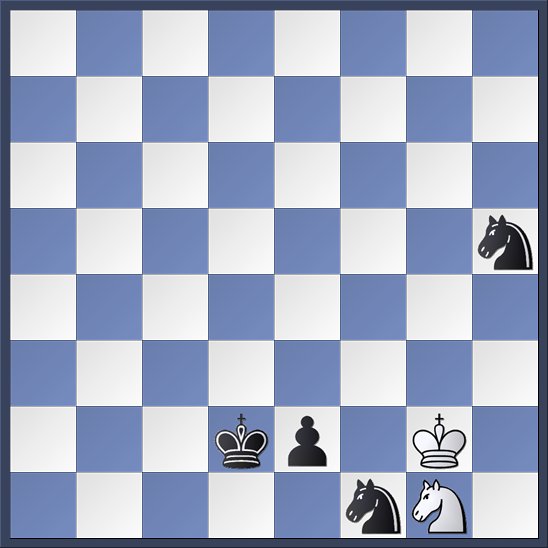 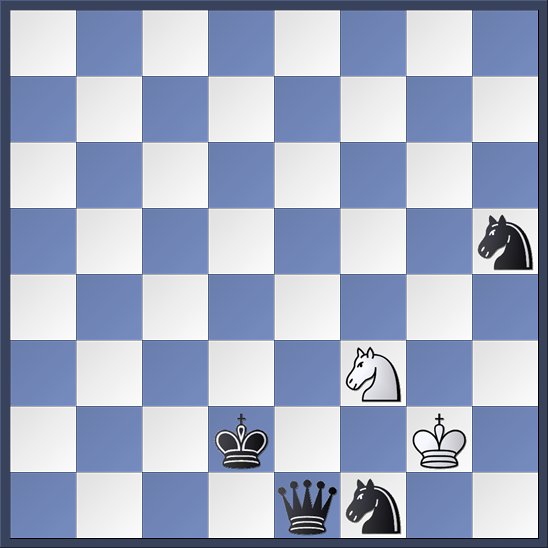 White will take the queen on the next move. That will leave black with two knights, and every Russian schoolboy knows that that is insufficient to win.

Of course, doing so immediately does black no good, since white will just take the knight on f1. White is also threatening simply to take the pawn on the next move, so suddenly black is the one in need of a good idea.

But he has one! There are lots of checks at his disposal. Perhaps the right sequence of checks will bring about a position in which black can promote his pawn under favorable circumstances. But what sequence should we use? 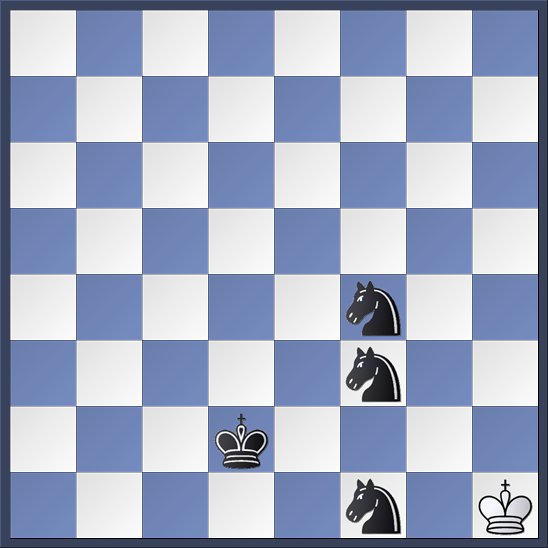 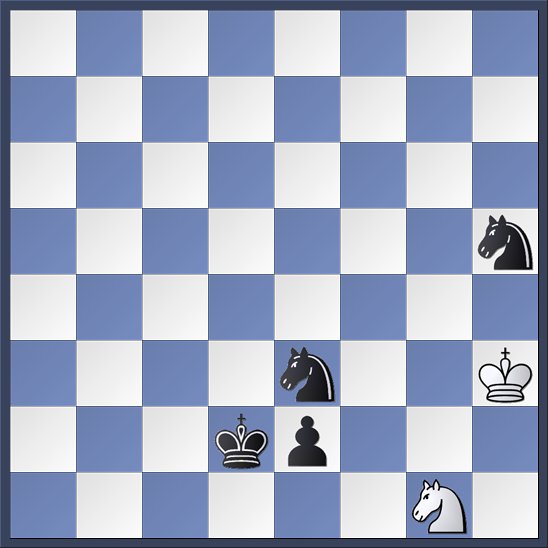 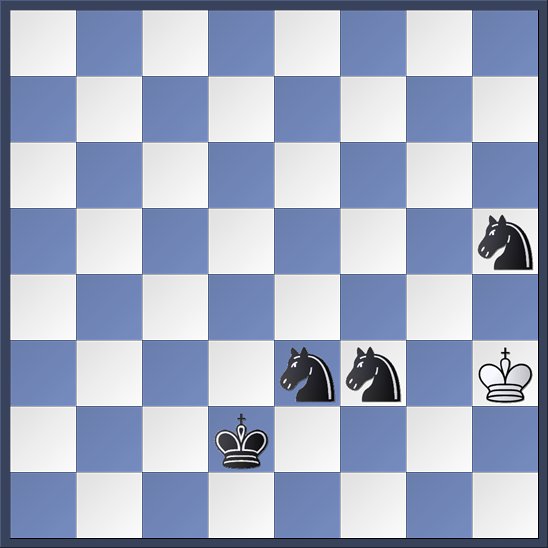 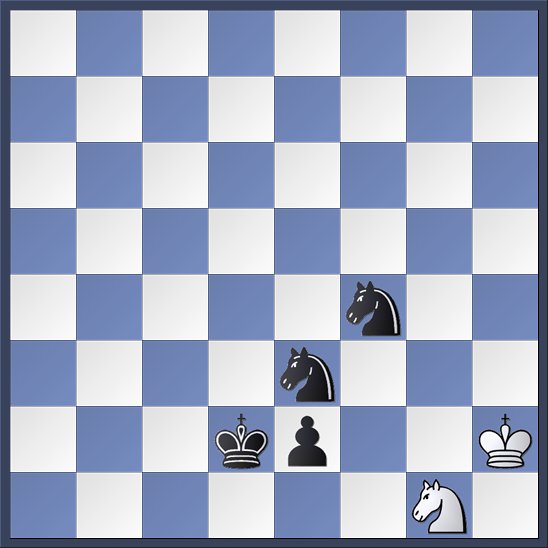 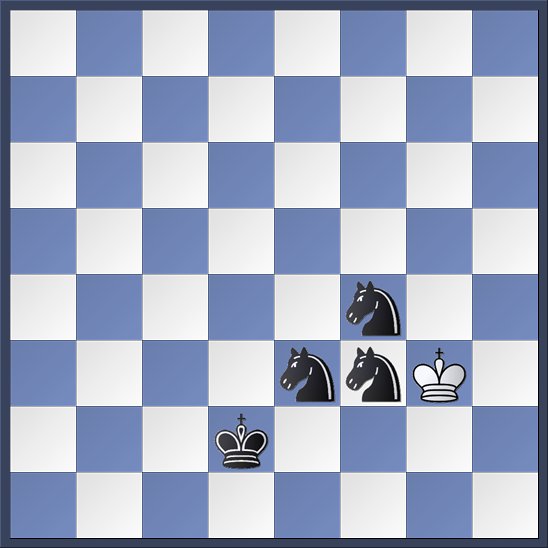 Black will lose one of his knights, and we have already noted that two knights are insufficient for the win. Playing 3. ... Nf1+ 4. Kh1 just repeats a line we have already considered. But black has not yet run out of tricks. He can play 3. ... Ng4+ 4. Kh1. 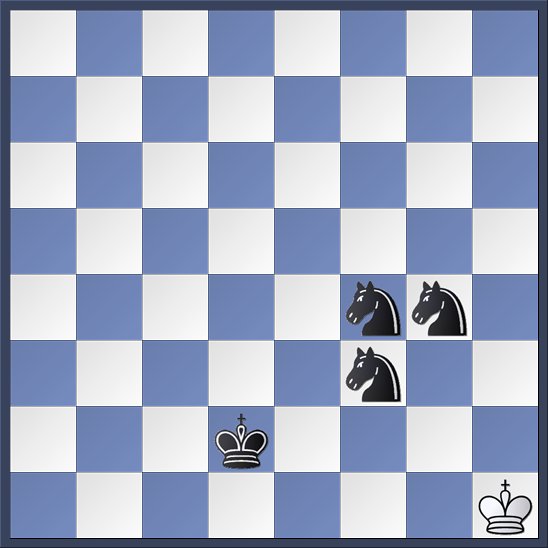 Black must be getting pretty frustrated, but he still has one last try. He can try 4. ... Nf2+ 5. Kh2, bringing about this position: 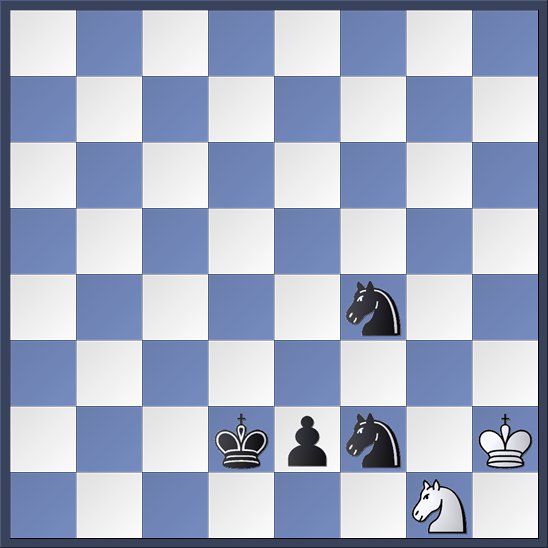 Is white in trouble now? It looks like black can finally make his third knight, since after white plays his fork on f3, black will take back with check. That's not stalemate! But all is not yet lost. It's time for the big finish: 5. ... e1N 6. Nf3+ Nxf3 7. Kg3!: 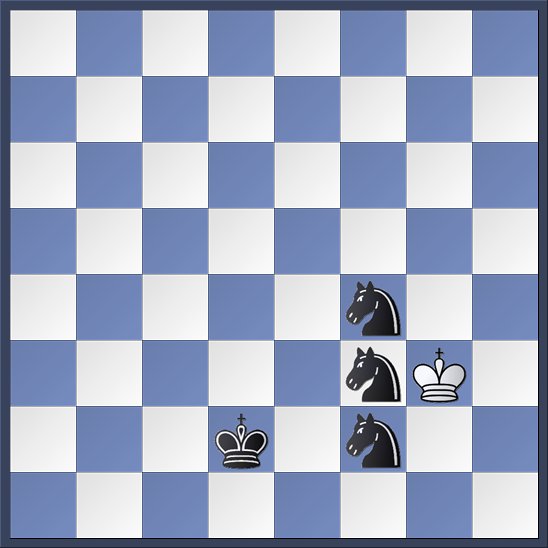 White's last move attack all three of black's knights. Black can't afford to part with any of them, so he must play 7. ... Ke3: 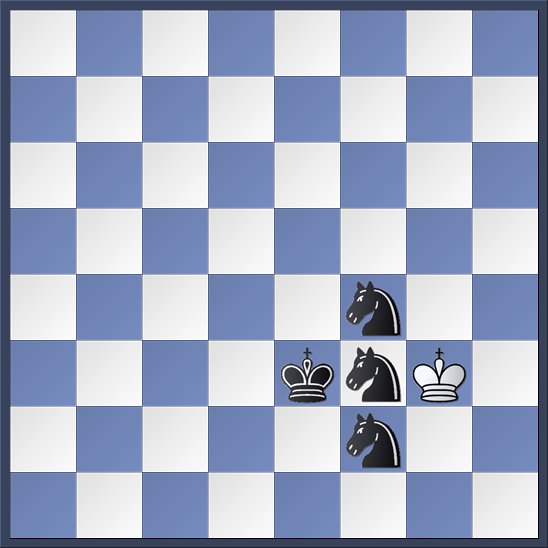 Surprise! That's just another stalemate. So it's a draw after all. Do I dare make a pun about this study being a real knightmare?

Regular blogging will resume next week, once I have finished digging out from the pile of work that didn't get done during my recent travels. But since Sunday Chess Problem waits for nobody, I've picked out a tasty little morsel for you. One of my favorite motifs in chess is that of a fortress…

This week I have another short, one-liner for you. It is another one I found at the end of one of Aviv Friedman's videos. He did not mention the composer, but I got a real kick out of it. The solution is short, but there is a lot of strategy packed into it. It is also one of those problems…

My new issue of Chess Life showed up in the mail, and it included coverage of the Sinquefield Cup from this summer. (Chess Life has a long lead time). Anyway, in the game between Magnus Carlsen and Hikaru Nakamura, Nakamura played the Queen's Gambit Declined as black. He was very lucky to draw…

I love this study. Sure, I prefer miniatures (less than 7 pieces, including the kings), so that's a pro already. But just look at the symmetry in the final diagram.

It should be noted that 1.Ng5 with the same idea doesn't work because of 1...Ke3 winning (mate in 10 according to my computer).

Well, this little beauty was worth the wait! Black leaves the table, muttering "Knights on the rim are grim; with Knights in a line I whine...."

@MNb, the point of Ng1 is that you are also threatening to take the pawn if black does not check.

Very true. With Ng5, white threatens to fork black's promoted piece, but black can simply wait three moves to promote and maneuver his h5 knight to e5, negating the threat of the fork on f3. Black obviously could then promote to a queen and win.