What I Did On My Summer Vacation

I realize I've been away a little longer than usual, but I have a good excuse. I just spent the past week with my family at Beaches resort, on Turks and Caicos. You see, my father turned 80 this year, and we marked the occasion by schlepping the whole family down to the Caribbean. 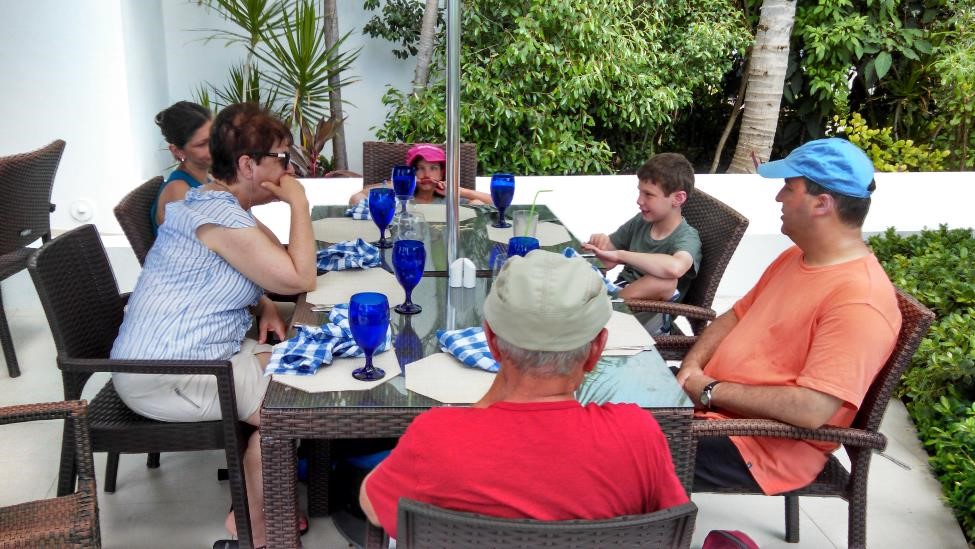 My peeps! There's Mom, Dad, my older brother Neil, my niece Sonia and nephew Noah (age 8 and 10 respectively), and my sister-in-law Elana. I'm sure you can figure out who is who.

Actually, Dad and Elana got a little shortchanged in this one. So here's Noah trying to get Grandpa's attention: 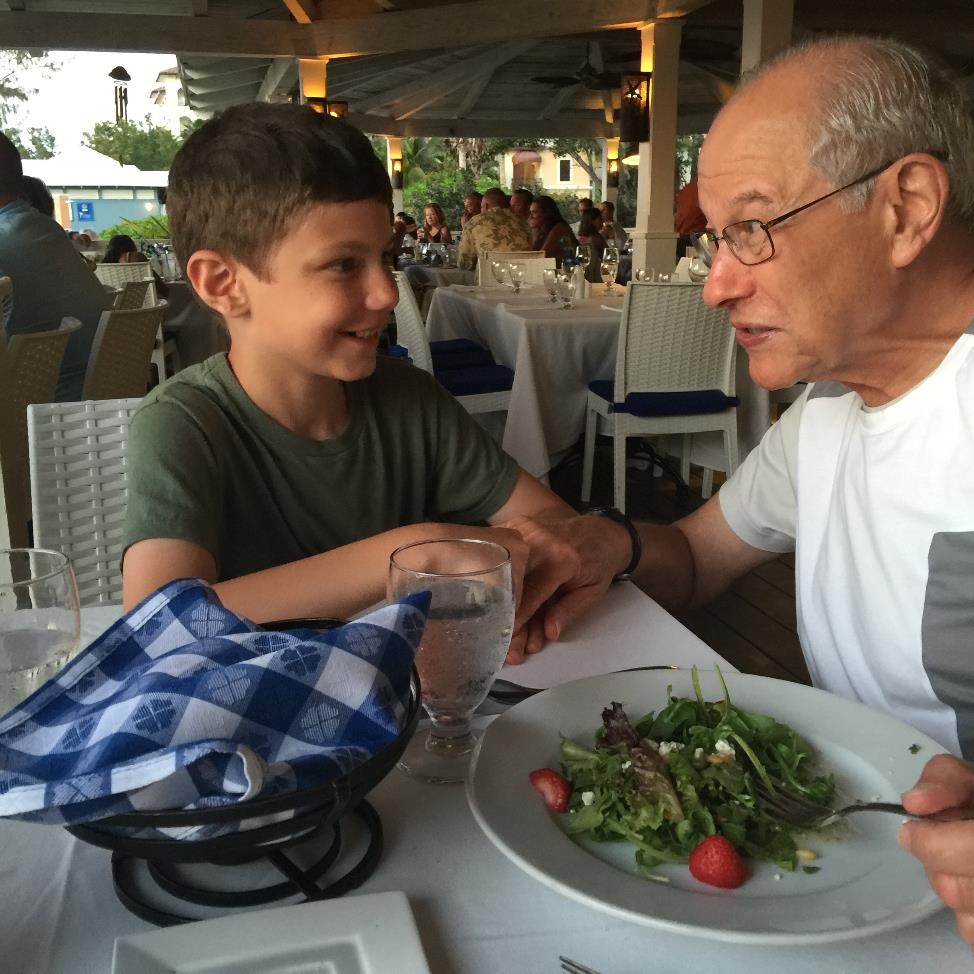 And here's Dad, Elana and the kids. 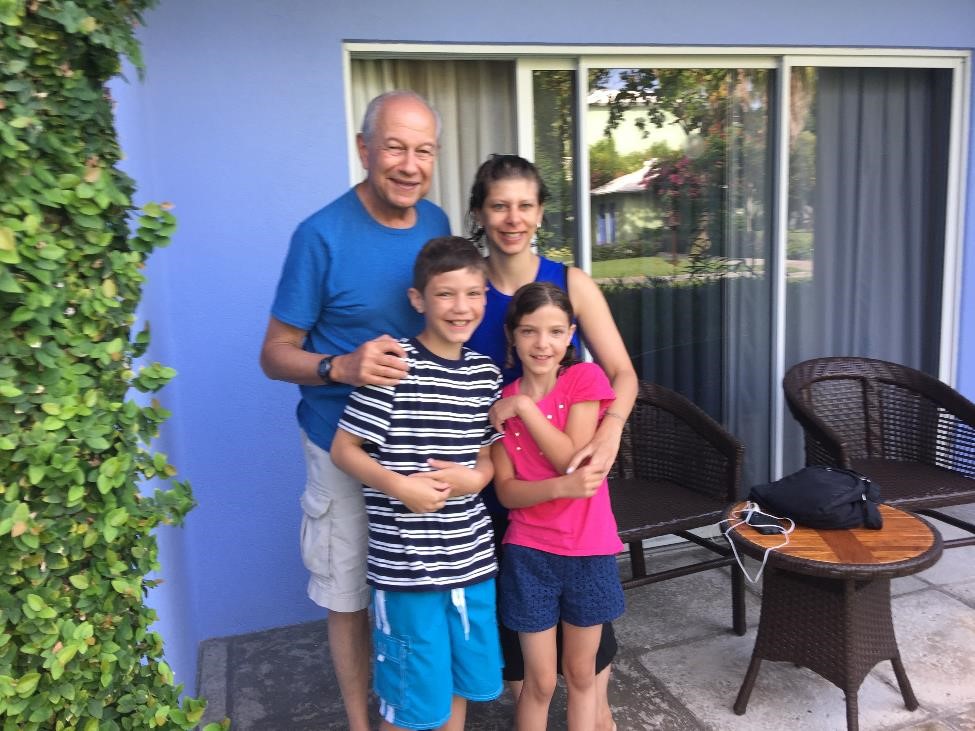 Now, here's the thing. When it comes to travel I'm the family stick in the mud. I get homesick very quickly, and I just generally find that the stress of the whole enterprise tends to outweigh any enjoyment I get from the experience. But I'm guessing I won't get very far with a blog post that says, “I really have it rough. My parents made me spend a week at a Caribbean resort, entirely at their expense.” So let's get down to business.

Here's me having dinner at an Indian restaurant with my brother's family. 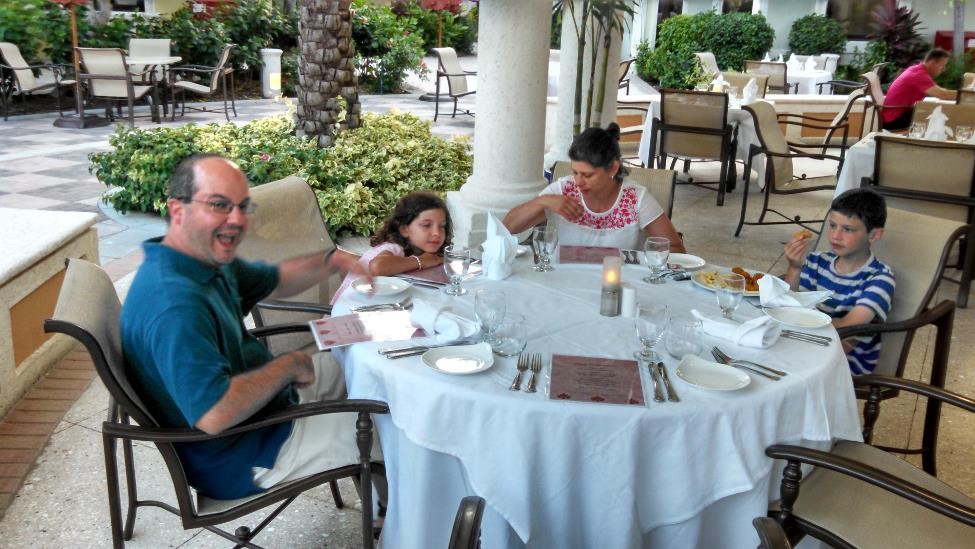 My parents had gone off on their own that night. If you're wondering why Noah is the only one eating, it's because he takes “fussy eater” to absurd extremes. It is a great annoyance to him that his parents expect him to eat, every day, and there are only a handful of foods he can tolerate. Chicken nuggets and fries are two of them, as you can see in the picture. (Actually, he seems to be studying his chicken nugget a bit skeptically here). Indian food is definitely not something he would find appealing, so we got him takeout from a different restaurant.

I have the opposite problem. I find food a little too interesting. And while I may be generally blasé about travelling, I must admit that they feed you exceptionally well at this particular resort.

Noah has shown some interest in chess lately: 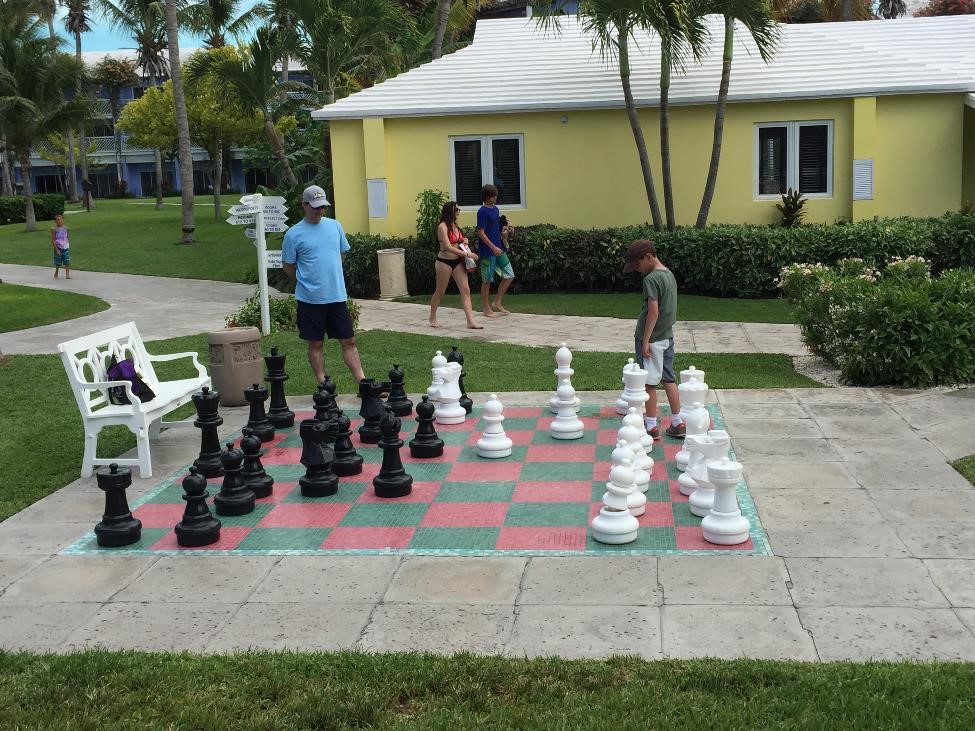 That's me in the light blue T-shirt. I tried to persuade Noah of the value of piece development, but he has his own ideas.

There were plenty of water activities. There was a water park with plenty of intriguing water slides. Noah thought that was pretty neat, and he spent hours just going up and down on them. Usually he was accompanied by Neil or me, but sometimes we conked out and just wished him luck going on his own. For a kid who doesn't eat anything he seems to have plenty of energy. For her part, Sonia was less impressed with the slides, though my brother finally persuaded her to go down with him in a double inner tube. The water park had a circular pool with a current built in, and you could ride around it on an inner tube. That's more the kind of thing she likes.

Sonia loved the pool though. On the last day of the trip we decided to go full decadent and reserved a cabana: 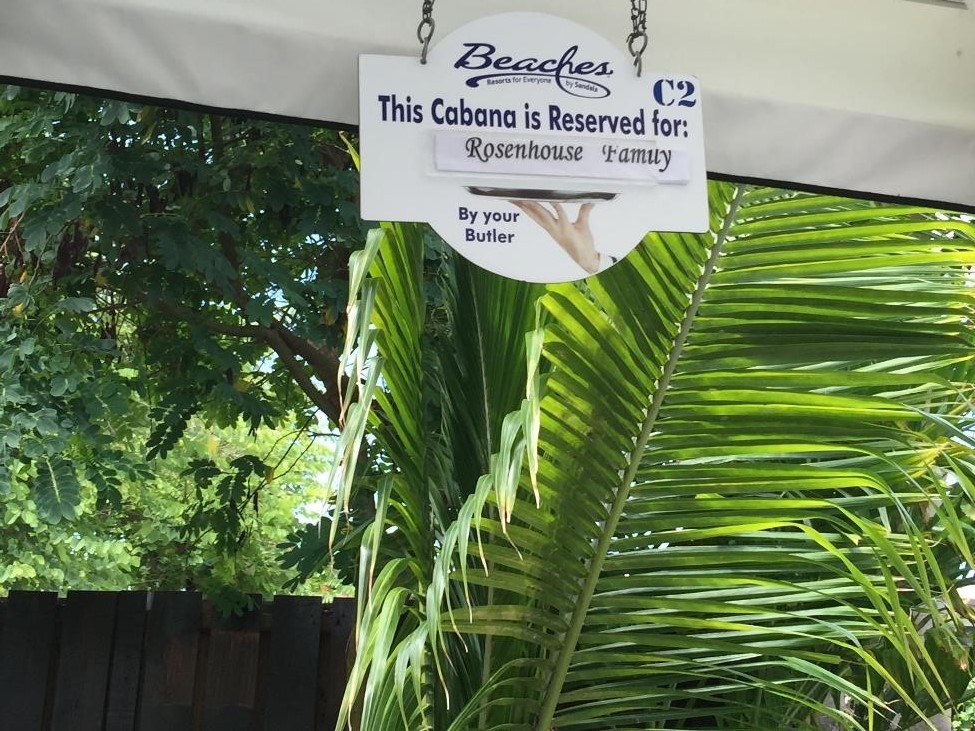 Good times! Here's some of the gang in the pool. 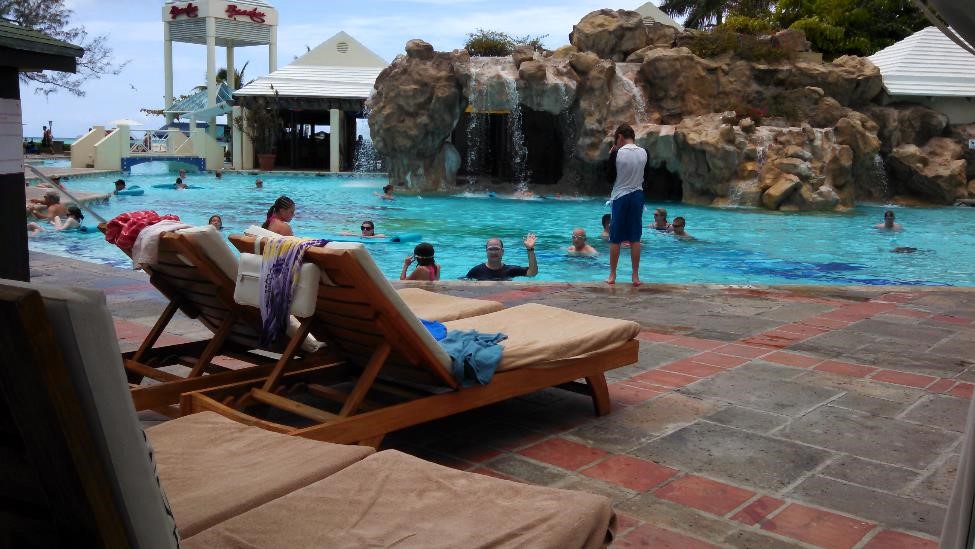 That's Neil waving to the camera. The little girl to his right is Sonia. Noah's the one in the long-sleeved sun shirt about to jump into the pool, and you can just make out the birthday boy a little behind Neil.

Not a whole lot of wild life. We didn't have any experiences like this one. Neil, Elana and the kids took a glass-bottom boat ride and saw some critters, but I wasn't with them for that. There was no shortage of small lizards darting around all over the place. Here's an interesting bird that showed up for lunch one day: 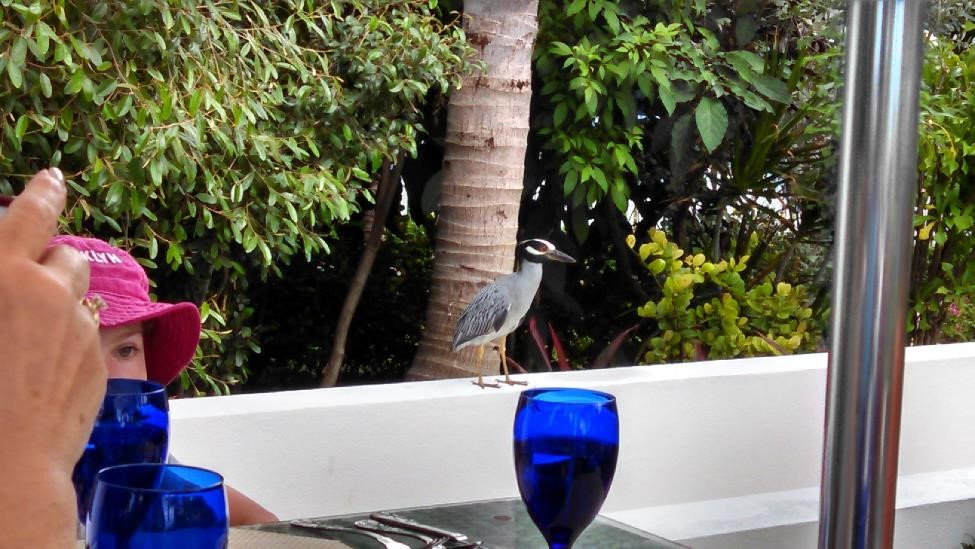 But enough of that. Let's get back to the food. Here's Mom and me having just enjoyed some late night ice cream. 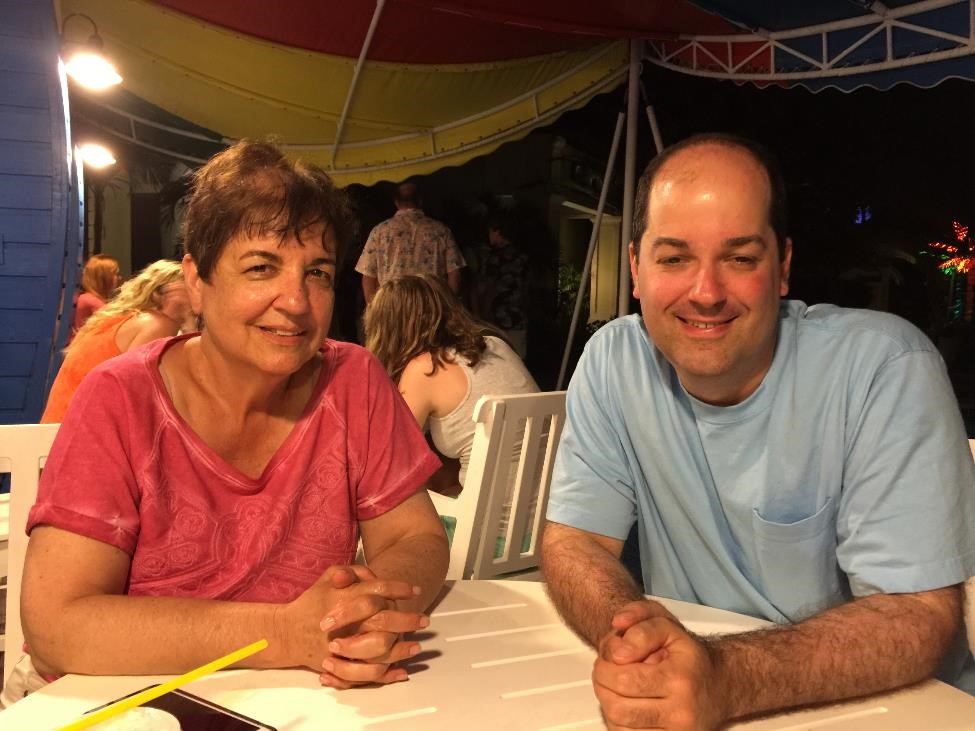 For my part, I was happy to spend a lot of time reading on the beach or by the pool. But I did find some time to go parasailing with Neil and Noah. 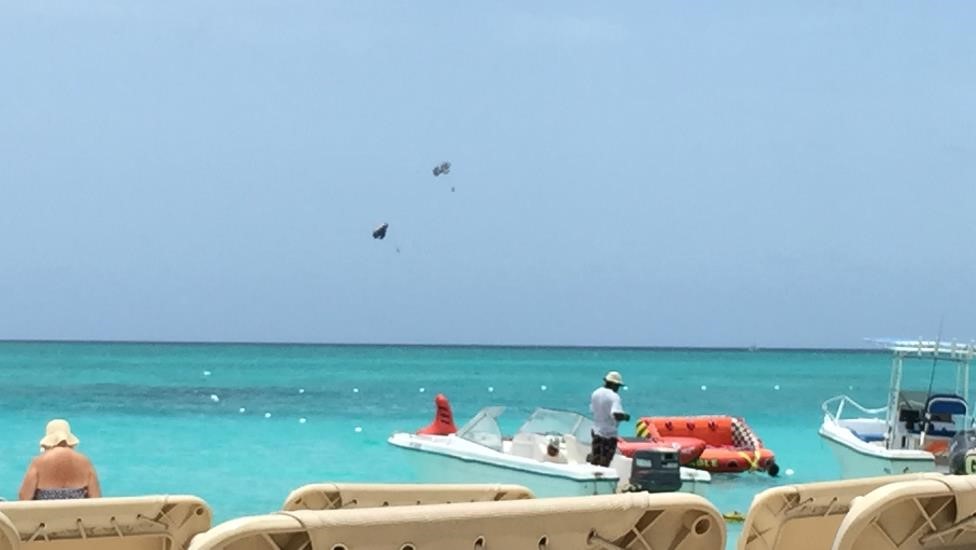 Mom assures me that the lower parachute is the three of us. Noah was beside himself with joy when we went up in the air. He declared it “awesome” and solemnly informed Neil and me that he “would remember this for the rest of his life.” I was pretty impressed myself. We were on the boat with a family of five from Arkansas, and it was nice to meet them as well.

But all such things must come to an end. I should mention that Beaches is specifically a family-friendly resort. As such, it has loads of activities for kids and teens. Here's Grover seeing my mother off in the departure lounge on the last day. 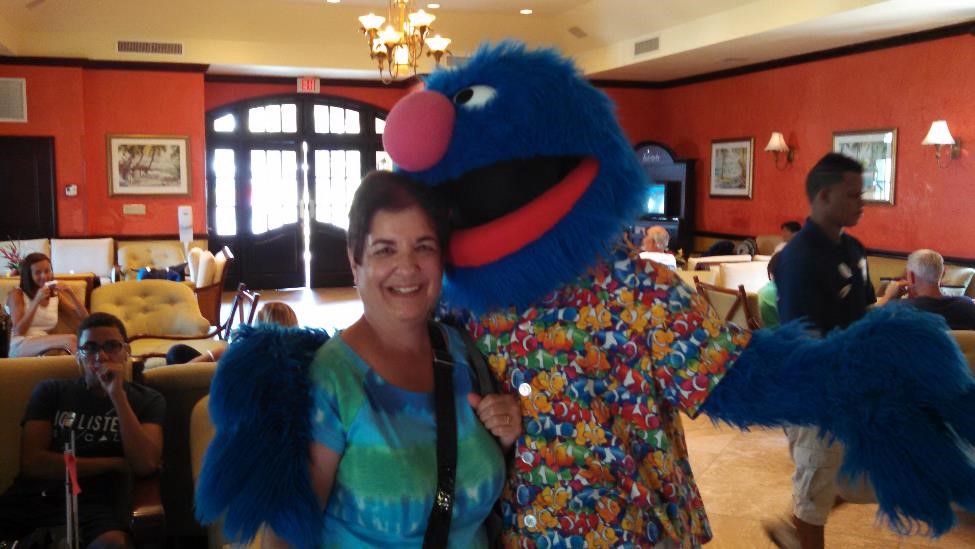 The we schlepped ourselves back to the airport and went home. More precisely, Mom, Dad and I went home. Neil and the rest of the gang, taking a different plane, got a bit unlucky, and had their flight cancelled. Mechanical failure was the official reason. This meant they got to spend the day at the tiny airport on Turks and Caicos while Jet Blue arranged a new flight for them. They did finally get home. They landed at JFK airport a little after midnight.

Happily, the one place to eat at the airport had chicken nuggets, so Noah didn't starve.

Sounds like a good time was had by all. Congrats and welcome back. I've enjoyed several Caribbean all-inclusives. They are great with a group but if I'm going on my own, I tend to favor more exploration-type vacations.

"by schlepping the whole family down to the Caribbean"
I wonder if Jiddish has influenced Dutch or the other way round.
"door de hele familie naar de Caraïben te verslepen.

For the record, the "interesting bird" is a yellow-crowned night heron.

Very nice article......i will try and keep my summer vacation like this yours......very great teachings.

Dead blog. I suppose stasis must have set in, as it so often does.

MNb, Yiddish is very strongly influenced by (yea, based on) German, which is closely related to Dutch.