From Fit to Fat to Fit. And Back. 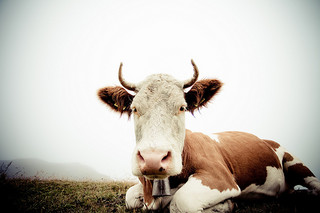 Did you ever watch cattle? I mean, really watch them, for a few hours? Mostly they just sit or stand around munching on grass, chewing their cud, or snoozing. But every once in a while a handful of them will stand up and point in one direction. And they may take a few steps in that direction. Then a few more will join them. And once a critical mass has been reached, the whole herd will just go. Domestic cattle, wild African cape buffalo, whatever. This is what they do.

And as the cattle do, so do bloggers. And one day one, then another, then another of these bloggers started to write about exercise and fitness. Many perspectives were brought to bear on the topic. There was some competition. (ERV won the competition.) Then after wandering off in that direction for a while they stopped to eat some more grass and chew some cud, and that was the end of it. Being a good cattle (sorry, there is no comfortable singular for the word 'cattle' that works here) I did the same thing, and wrote something like seven blog posts chronically a journey related to fitness ... not Darwinian fitness, but rather, physical fitness, I had gone through.

It ended on a low note, but then, almost ironically, my journey took an even more undesirable turn when almost exactly one month after I wrote the last installment I suffered an incident that put me in the hospital, in the operating room, then into bed for several weeks (and not in a good way), on crutches with a brace for several more weeks, hopping around with just the brace or just a crutch for several more weeks, and just about a year after the incident, to my final visit to the surgeon and not quite healed yet, but good enough. It was an injury to my knee and it had a rather negative effect on my overall level of athletic fitness, bringing me to an all time low point. From which I am now rapidly ascending like a swift and powerful Phoenix from a pile of ashes. And I exaggerate only a medium amount.

So I've decided to rewrite, revise, extend, and repost the original story. Those can be found in the archives under the category heading "exercise and fitness." The present version will be archived under the heading "From fit to fat to fit," to help keep them separate.

I recommend printing this out and reading it at the gym while you are on the treadmill. You'll feel much better about yourself, I promise.

Thanks. Did you hear of the recent claims, that excericise didn't help much in losing weight, maybe because it stimulated appetite and the sense of "deserving" and getting away with more? I can imagine how overweight creeps up on someone, but still expect more "effort" in response. One thing I just don't get, despite all the technical, semi-plausible offerings: why are so many more people overweight today than in decades past? In the 40s and 50s, it was a rarity and "special", esp. among young people. Is there an answer, and an answer about what to do?

I've heard of several things blamed over the years. The latest is high-fructose diet causing liver damage that unbalances the hormonal feedbacks that regulate food-intake, hunger perception and exercise (insulin, leptin and a few others). But wait another few years and something else will be the next hot 'cause'. I just hope they eventually figure it out and we can really start to reverse the trend.

We drive EVERYWHERE now, to places we used to walk. We used to walk down to the corner store to pick up a few items, now we drive. We used to take our children out of the strollers to walk as soon as they were able, now I see 7 and 8 year old fat kids being lugged around in strollers usually eating or drinking something, by their equally fat parents. Take a look around you, our lifestyle has changed sooo much in the past 20 or 30 years...kids don't go outside to play all afternoon until dinnertime anymore, they play on the computer...trapped by their fears of kidnapping boogeymen.

I think Gwen is right, but there is also recent news of a form of cold virus ... once you get this particular cold your fat cells become super-efficient.

Now they need to come up with a cold that undoes that.