How to Identify Dragonflies and Damselflies

I want to tell you about a cool book, but first, here's something interesting about Dragonflies. Terrestrial animals (like humans) require long chain fatty acids but don't synthesize them from basic parts. Higher terrestrial plants don't make the biggest of these molecules either, but plants do make molecules that can be turned into things like EPA and DHA in animals. So, while terrestrial animals can get what they need by consuming other animals or by starting out with plant molecules, it is a long slog from a bunch of readily available simple molecules to large and hard to get but very important long-chain polyunsaturate fatty acids. This is why nutrition experts tell us to eat fish or fish oils. Fish have lots of these molecules already in them.

Where to the fish get them? Well, at the base of aquatic ecosystems are algae that produce these molecules. So, stuff that eats stuff that eats stuff in aquatic systems eventually eats these algae directly or indirectly. And here's where Dragonflies come in. They hatch and mature through non-adult stages in the aquatic ecosystem. There, the Dragonfly larvae are little tiny super predators, eating other invertebrates and even tiny fish. In this manner they concentrate long chain polyunsaturated fatty acids. Then, they emerge as adult insects and fly around where terrestrial animals munch on them. In this way, these rare and important complex molecules become a bit more abundant in terrestrial systems than they otherwise might. This applies broadly to "emerging" insects that start out in an aquatic form, but in some environments the Dragonflies are a major factor. More generally, dragon flies move piles of biomass across the landscape, away from ponds and lakes where bio-molecules naturally accumulate because stuff goes down hill.

Citations for two recent research papers that discuss this are below. 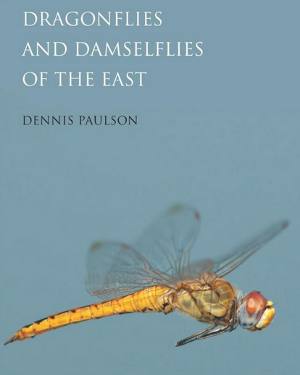 And now for the book. There are over 300 species of Dragonfly and Damselfly in North America east of the Rocky mountains. Dragonflies and Damselflies of the East (Princeton Field Guides)

by Dennis Paulson covers them all. We've been dragging this book up to the cabin (it is a bit large) for several weeks now and we've been able to identify everything. Beyond that, Dragonflies and Damselflies of the East

has a lot of good information in it about the morphology and anatomy...essential if you want to do identification...and taxonomic relationship among these critters. There are a lot of photos and they are spectacularly good and very useful. There are also plenty of other illustrations and line drawings, and range maps that look great and are easy to use. The introductory sections are rich in detail about Dragonfly and Damselfly ecology and biology.

Paulson also has a Dragonflies and Damselflies of the West

, which I've not seen but looks similar based on the descriptions. To be clear: The East book is mainly "East of the Mississippi" but also covers a range pretty far west, as obviously the Mississippi is not a Dragonfly boundary. If you are anywhere in or west of the Dakotas or Texas, you may want the Western book.

Haven't seen any dragonfles or many other insects either here this 'Summer'. Just a few bumblebees, flies and moths with some beetles. The weather's been appalling, actually cool / cold and raining often, very wet. Only the slugs and snails have benefitted. I doubt the amphibians are having much luck with so few insects. Mammals and birds are having a tough time too.
It seems the weather is Jet-stream related, with a suggestion that this has a tendency to get stuck due to the warming Arctic.

The Nature has an infinity diversity of wonders just waiting for we discovery then.

This Book is excellent for Minnesotans. It reduces the clutter by 2/3.

That is a nice pocket guide and I like it. It has all the dragonflies but not all the damselflies. One really needs both.

I get a ton of dragonflies in my back yard for some reason. Probably because I am about a mile from a lake. I never thought about trying to identify the species!