A while ago, I wrote Who is to blame for politically shaded shootings? in which I made this rather extreme statement which was only weakly opposed by any commenters:

Generally speaking these days, progressive movements and for the most part the “left” in America speaks out against violence, is more or less either anti-gun or pro gun regulation, mostly anti-war, and mostly pacifist, while the right wing tends to form heavily armed paramilitary militias, is totally against almost any kind of gun related regulations, is pro war, and bellicose. So when someone from the right shoots someone on the left, it really is a natural extension of what they talk about. When someone on the left shoots someone on the right, that’s a crazy person.

Today, I came across this interesting graph on Google+: 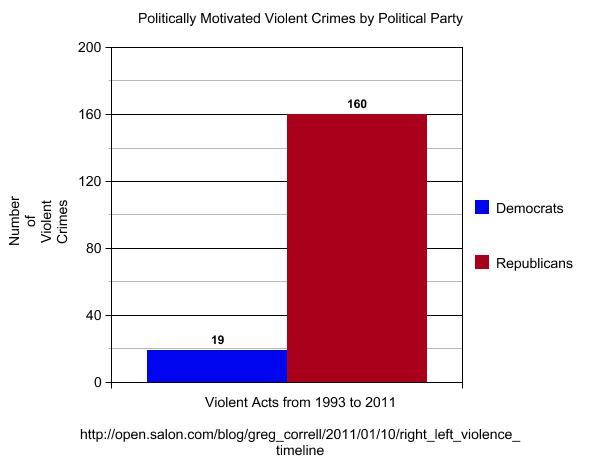 See this for source and for a discussion on what it all means.

Well, 2nd Amendment belongs to 19th Century, not 21st.
See, Founding Fathers are not impeccable after all.

Well, I can add (from my European experience) that leftist violence is usually with a precise target (that person is wrong, I kill that person), the right-wing violence is blind (the left is wrong, I kill as many people as I can, even if they are maybe not leftist).
Every violence should be condemned, but there is anyway a difference in thinking.
Greetings,
Mauro.
---
http://pensieri-eretici.blogspot.com

Your article is flame-bait for tea party nutters. Violence is the failure of politics, not the expression of it. The right wing in the US are ideologically the "self made men" party, they will attract people who reject politics altogether. Do the same research in Greece and see which "side" comes out looking like an angry mob.
Why don't you try a different tack, why not talk up your guy rather than trying to demonize the opposition.Take a look at recent speeches by Bill Clinton, the man is a genuine statesman and a fantastic story-teller.
And yeah, I know you're factually correct, but that's not my point ;)

Yes, I'm familiar with the Greek Angry Mob thing. Did you know that in Greece I'm The Antichrist? Google it.

Regarding my tack, I do both. And other things.

Which party is more violent? I would like to see a bar-graph based on the use of violence as an instrument of foreign policy when the party is in power. I suspect it would not be so lop-sided.

This is a US study done by DHS, and while not specific to firearms, the question seems to revolve around political motivation to violence.

The Salon article uses instances like the March 29, 2010 "Hutaree" arrests that resulted in no violence whatsoever and many of the 9 were cleared of all charges. None of the "conspiracy" charges stuck. ( http://www.freep.com/assets/freep/pdf/C4187157327.PDF ) With data-points like this, who needs to question?