It is said that the national conventions of the two main parties in the US influence polls. This is sometimes called the "Convention Bump" but that term is used for a lot of other things, like a network getting more viewership during a convention, or a candidate getting more funding or larger crowds for a while.

The convention bump probably has two different causes. One is the tendency of the party about to have the convention to pile on lots of ad time on many TV markets, and to continue those ads during the convention. The other is the added attention to the candidate from the convention itself. In theory, the latter should differentiate between the two parties with respect to how well the convention went for them. If overall opinions about the candidates and parties are roughly similar in intensity and popularity, and the conventions go about the same, each party should have a similar bump, which is typically reflected in polling trends after the convention for about a week.

So, this year, how did the Democrats vs. Republicans do? Here's a graph from RCP showing average polls for several days in August and September. I've marked, with Republican Red and Democratic Blue circles, the last day of each of the two conventions . Clearly, the Republicans got a bump. Clearly, the Republican Bump disappears into insignificance compared to the Democratic Bump. I think we should look at this again in a few day to see what happens to that Democratic bump, but so far this is very interesting. 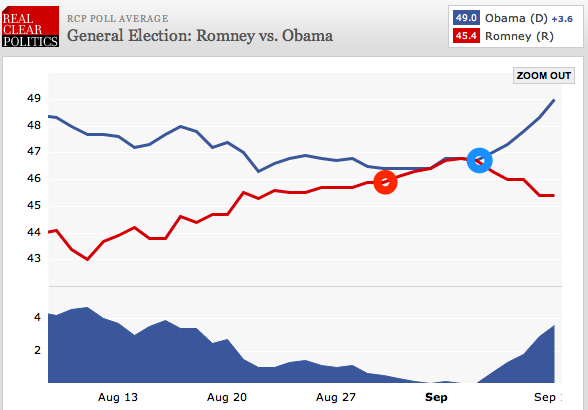 A brief informal look at the data from four years ago suggests that both parties got roughly equal bumps at their conventions when Obama and McCain were the candidates. If so, and if this year's difference in "bump" hold true, than something rather historic may have happened over the last thirty days.