Hypothesis: There are very few misogynist creeps in the Secular-Atheist-Skeptics Movement

You know, there's a pretty good chance that Justin Vacula is an OK guy. Really, that's probably true of all of the SlymePitters. Hell, I used to count Abbie Smith among my eFriends, back when the two of us shared certain views about stuff going on at Scienceblogs.com, such as being unimpressed with the Drama of Pepsipocalypse.

But, Justin and some (or all?) of the self-described SlymePitters do not share the modern feminist view of society and politics that underlies a majority of secular, skeptical, atheist, and related activism, or that is found fairly widely among that community. Some other guys probably started out that way too, but after listening to their fellow community members have seemingly embraced modern thinking on civil rights and equality. But the SlymePitters didn't. They drew a line and dug in and refused to even consider crossing it, and from that entrenched position they have spent some 15 months or so continuously and systematically bullying a handful of women and a couple of men who stood up to them. But this is not to say that these people don't actually believe in equality or civil rights of some kind. They probably do. They are just doing it wrong. Very, very wrong. They are savable, changeable, they can learn. But as long as that does not happen, what they do is unacceptable and I would even say unforgivable. A "second chance" is always an option, but only after one disavows oneself of the Slyme and admits one's role in making other people's lives miserable. And apologizes. A lot.

Anyway, none of that is the point off this blog post. The point of this blog post is to acknowledge the fact that the frequency of misogynistic creeps in our community is low. This needs to be openly acknowledged and understood for several reasons. First, it can help their victims to feel better, less threatened, and be less concerned, perhaps, because their oppressors are a tiny and insignificant group. Second, it can help organizations like the SCA to understand that this particular part of the community...the misogynists and haters...are a tiny minority. Third, it can help, perhaps, deflate the egos of the active members of the SlymePit so that they will dry up and blow away. And by that I mean quiet down for a while, lick their wounds, rethink their approach, change, and come back for their second chances.

The hypothesis stated as the title of this post is well supported by the latest turn of events.

Justin Vacula, who had been appointed by the Secular Coalition of America as one of its state unit leader, and who is also a long-standing and highly active member of the SlymePit, has seen fit to resign from that position following an outcry of outrage from the community that he was ever invited or allowed into this position.

Justin did his resignation wrong, of course. Instead of simply acknowledging differences of opinion and backing out without much comment, or even (unthinkably, I'm afraid) admitting that he has not been a good member of this community and indicating how badly he feels about his horrid behavior, he produced a whinging accusatory screed that kinda sorta maybe admitted that he could have done some things differently but mainly blamed everybody else. For stuff. It's not entirely clear what.

Anyway, the thing that seems to have lead to Justin's resignation was a petition to the SCA to drop Justin, at Change.org, and started by Stephanie Zvan. (See this for an update.) A lot of people signed that petition. Also, another petition started by a fellow SlymePitter, also at Change.org, allowed for the possibility for supporters of Justin to chime in and show that a big portion of this community liked him and wanted him to stay in his SCA position. Hardly anybody signed that one. The difference between the two may have mattered, even to him, to clueless, self absorbed unobservant uncritical him.

So, I made this histogram: 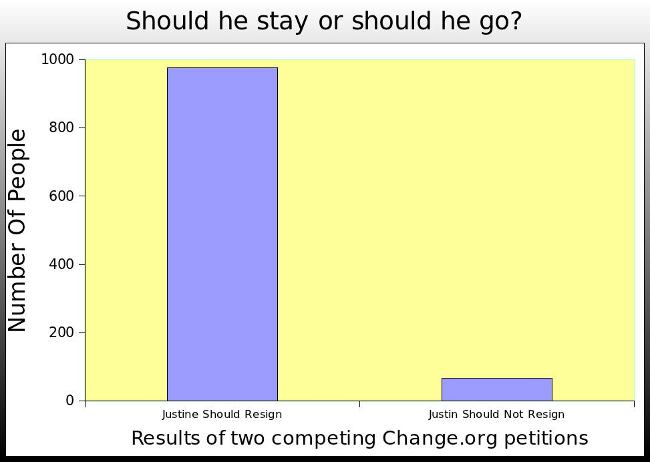 The hypothesis is not rejected.

To be fair, it should be noted that somewhere around the number of people who signed the "Not Resign" petition signed the "Resign" petition in order to do things like call me a cunt. It doesn't affect the order-of-magnitude comparison, but it will make a difference in some decimal point.

Yes, true, but it is likely that of the sixty six people who had signed the pro-Vacula petition, half of them were probably sock puppets, thus off setting the crossover you mentioned.

Also, to be fair, the validity of online petitions for this sort of thing hangs heavily upon those with the larger number of people kvetching. In this case, those who were out to hang Vacula for various and sundry asinine reasons. What this has accomplished, however, is a very bright light has been put upon the proponents of "AtheismPlus", "FreeThoughBlogs", and "Skepchicks'. They have shown themselves to be bigoted, hate-filled, and nothing short of bullies. Bravo, asshats.

Renee, I agree with your basic point about kvetching, but you've reversed it. The smaller group are known to us pretty much only because they kvetch and do little else. That is their raison d'etre. Many are pseudonyms constructed only to carry out this misplaced and misguided misogynistic agenda.

This does not show the groups you mention to be anything of the kind. A number of people (about a thousand as it turns out) came together to issue a complaint that a man who has dedicated himself to a campaign of on line harassment of specific targets because they are feminists. Let me put it another way. A group of people came together to object to the bigoted, hate-filled and bullying behavior of some guy who would have been ignore were it not for the fact that he was appointed to represent an entire state's worth of mainly progressive, anti-sexist, anti-misogynist secular humanists and atheists.

I didn't mention in my essay, but only because I had to write it quickly while Huxley was eating his sandwich, but stark (often profane) rhetoric is often a signal of a movement's flaws. As the SlymePit started to ramp up its bullying efforts, they started to use the term "bully" a lot. As you do here.

I know nothing about "AtheismPlus" so I can't remark on that.

But, I can tell you that you are not actually welcome to come on my blog and call me an asshat. So please assure me that you did not just do that.

Um... wait, Renee, forget I asked you to respond. Following that slew of stalky insulting posts on my twitter feed, you are not allowed here any more. I know you claim that you are drunk and this is why you have no self control, but I'm not accepting that as an excuse. That is all, have a nice evening.

You mean he's probably an OK sorta guy like Mitt Romney's an OK kind of guy? Or Jack the Ripper was an OK guy, or You-Know-Who?

Yeah, like maybe have a beer with him kinda guy.

I don't really drink beer any more these days, though. Just sayin'

What was ironic is that he referenced a play in his resignation letter, not being literate in that sort of way, I had to look it up.

Hooray! He resigned. I really don't see the MRA people doing anything constructive, unless they think bullying and intimidation of women and anyone supporting feminism is constructive. I don't.

Greg, you are being far too benevolent. There may well be relatively few active misogynists in the Yorkshire Ripper sense or even in the Justin Vincula sense, though I would want citations.

There are, though, a seemingly infinite number of misogyny fellow-travellers who will go along with any number gender-based generalisations, negative assumptions, ridiculous claims based either on mythology or long-discredited pseudo-science, etc. I'm pretty sure some malevolent being bakes them fresh every morning 'cos they keep on coming.

There'll be a huddle of such people now gathering around dear JV to reassure and to bind up his wounds. Anything rather than even question whether just one of the people on the first petition had a point.