Did Curiosity Find an Artifact on Mars?

Quite possibly. Here's a picture of it: 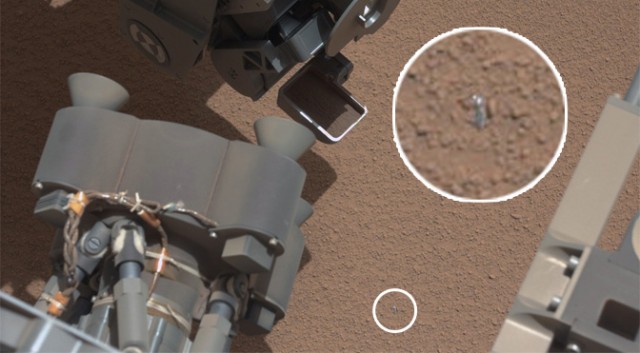 There's a pretty good chance that this is a manufactured object and not some natural thingie that formed on the surface of Mars by Mars-esque natural processes. But, if that's true, then there's a pretty good chance that the object, formed by an intelligent being, is just some piece of junk that fell off of one of the alien space ships that has landed on Mars recently. Alien to Mars, sent by Earthlings.

It reminds me of this one time... we were doing survey in a certain region which shall remain nameless, and finding lots of stone tools and stone tool fragments. Then, all of the sudden, we found a bunch of flakes and a very half baked bifacial tool all sitting together on top of a rock, almost as though some early hominid had just arrived a few hours or days earlier, from a time machine presumably, and did some flintknapping right there.

Of course, this was the archaeologists who had surveyed the area the year before my crew was there wondering if the stone they were seeing around was flake-able. It was. But they shouldn't have done that; in a few more decades, those artifacts may end up looking a lot like real old stone tools and would confuse use. Always do your flaking below high tide, as it were, where the stuff will be disappeared by natural processes of erosion in no time.

Curiosity is curios. So, the planned mission activities for the next while will be put off while this metalish looking thing is investigated. Just in case.

Nash its a martian, in the blow up you can see his two beady eyes...

if we get a really good look, we'll see the "Made in China" decal.

NASA's take: the team has assessed the object as likely to be some type of plastic wrapper material, such as a tube used around a wire, possibly having fallen onto the rover from the Mars Science Laboratory spacecraft's descent stage during the landing in August.
http://www.nasa.gov/mission_pages/msl/index.html

And so, the disinformation campaign begins