You know the story, so I won't give you a summary, and the whole point is the illustrations so you should just click through

to see. (The graphic at the top of the post is from within the book, illustrating the overall reading level and quality).

So Few of Me 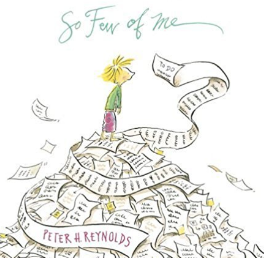 Leo's list of things to do keeps growing, until one day he wishes, "If only there were two of me." Just as the words are out of his mouth, poof! Another Leo appears! Two Leos become three, three become four, and four become more . . . but Leo can't help but notice that he has even more to do than before. As he struggles to deal with his overcomplicated life, Leo realizes that there may be a simpler solution to his overscheduling woes. Peter H. Reynolds, the award-winning author-illustrator of THE DOT and ISH, returns with an important message for readers of all ages: stop and take a little time to dream.

a second installment by Peter Reynolds

I’m here.
And you’re there.
And that’s okay.
But…
maybe there will be a gentle wind that pulls us together.
And then I’ll be here and you’ll be here, too.

Other books (not reviewed her) by Peter Reynolds, including a box set:

, a third suggestion by Peter Reynolds

Drawing is what Ramon does. It¹s what makes him happy. But in one split second, all that changes. A single reckless remark by Ramon's older brother, Leon, turns Ramon's carefree sketches into joyless struggles. Luckily for Ramon, though, his little sister, Marisol, sees the world differently. She opens his eyes to something a lot more valuable than getting things just "right." Combining the spareness of fable with the potency of parable, Peter Reynolds shines a bright beam of light on the need to kindle and tend our creative flames with care.

Farmer Brown has a problem. His cows like to type. All day long he hears:

by Kate McMullan and Jim McMujllan

This is more illustration than words, but the image gives you an idea of the words.

For fans of Goodnight, Goodnight, Construction Site and Steam Train, Dream Train comes a noisy addition to the hilarious read-aloud series from Kate and Jim McMullan, the popular creators of I’m Bad! and I’m Dirty!

“Know what I do at night while you’re asleep? Eat your trash, that’s what!”

With ten wide tires, one really big appetite, and an even bigger smell, this garbage truck’s got it all. His job? Eating your garbage and loving every stinky second of it! And you thought nighttime was just for sleeping.

The Three Little Aliens and the Big Bad Robot

by Margaret McNamara and Mark Fearing.

Introduce kids to the planets and solar system in this fractured fairy tale retelling of the classic The Three Little Pigs. Parents and children alike will adore this out-of-this-world story, which is set in outer space!

GREEP BOINK MEEP! The three little aliens are happily settling into their new homes when the Big Bad Robot flies in to crack and smack and whack their houses down! A chase across the solar system follows in this humorous and visually stunning book from Margaret McNamara (How Many Seeds in a Pumpkin?) and Mark Fearing (The Book that Eats People). The endpapers even include a labeled diagram of all the planets.

(I would have given this a five star, but Amanda gave it a four.)

Scaredy Squirrel never leaves his nut tree. It's way too dangerous out there. He could encounter tarantulas, green Martians or killer bees. But in his tree, every day is the same and if danger comes along, he's well-prepared. Scaredy Squirrel's emergency kit includes antibacterial soap, Band-Aids and a parachute.

Day after day he watches and waits, and waits and watches, until one day ... his worst nightmare comes true! Scaredy suddenly finds himself out of his tree, where germs, poison ivy and sharks lurk.

But as Scaredy Squirrel leaps into the unknown, he discovers something really uplifting ...

From John Peters at Booklist:

Gr. 1-3. In a tongue-in-cheek tale that may help to prod anxious readers out of their hidebound routines, a squirrel discovers the pleasures of leaping into the unknown. As the world's a scary place, what with the killer bees, green Martians, tarantulas, germs, and sharks that might be lurking about, Scaredy Squirrel keeps to his tree, and to a precise, minute-by-minute daily schedule--until a supposed "killer bee" actually wanders by, causing Squirrel to dislodge his suitcase-size emergency kit. A wild lunge to rescue it turns into a long glide (portrayed in a gatefold), as Squirrel discovers to his astonishment that he is a flying squirrel. Eventually, Squirrel returns in triumph to his tree and from then on adds a daily glide to his accustomed rounds. Despite the simply drawn cartoons and brief text, this is more sophisticated in tone than Martin Waddell's Tiny's Big Adventure (2004), though the message is similar.