Newton and the Counterfeiter

The other side of the coin(age): Newton and the Counterfeiter

Did you know that Isaac Newton had two jobs? One, you know about: To figure out all that physics and math stuff so we could live for a while in a Newtonian world (later to be replaced by an Einsteinian world). The other was as the big honcho of the Royal Mint. Where they make the money. 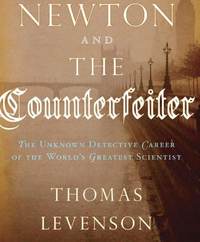 In that second job, Newton had several interesting problems to deal with, which were in some ways more complex than how planets keep orbiting around stars and apples keep falling from trees. He needed to secure the coinage of the land against counterfeit, and in particular, to end the career of one particular master counterfeiter, William Chaloner.

This story is expertly chronicled in Newton and the Counterfeiter: The Unknown Detective Career of the World's Greatest Scientist

This is interesting for many reasons, including the fact that modern money, as we know it today (not coinage ... that's old ... but the mint system itself) was pretty new, and modern law enforcement as we know of it today simply didn't exist.

Of this book, Levenson notes:

Newton, I found, was a bureaucrat, a man with a job running England's money supply at a time with surprising parallels to our own: new, poorly understood financial engineering to deal with what was a national currency and economic crisis. He was asked to think about money, and he did--and at the same time, he was given the job of Warden of the Mint, which among other duties put him charge of policing those who would fake or undermine the King's coins. So there I had it: a gripping true crime story, with life-and-death stakes and enough information to follow my leading characters through the bad streets and worse jails of London--and one that at the same time let me explore some of critical moves in the making of the world we inhabit through the mind and feelings of perhaps the greatest scientific thinker who ever lived. How could I resist that?

Those were the days ... when a physicist could murder a counterfeiter in the name of the King

William Chaloner, the counterfeiter, reminds me of a handful of people I've known. He possessed a sense of entitlement balanced by a remarkable capacity for greed and tempered with an acute sociopathy. He clearly had a keen intellect and extraordinary manual skill. When Isaac Newton murdered Chaloner (to put it the way Chaloner would put it) he did the world a favor. I'm not saying that certain people I've known should be hanged, gutted, and sliced like a chicken into five or six parts, but one can see why the idea would have been attractive back in the late 17th century when that was the usual practice for dealing with treasonous individuals in London.
Newton and the Counterfeiter: The Unknown Detective Career of the World's Greatest Scientist

relates the days when Isaac Newton, in his job as Warden of the Mint (housed in the Tower of London) engaged in a long term game of cat and mouse with the criminal and counterfeiter Chaloner, over the course of several years in the late 17th century. A very striking part of this story is the nature of the legal system and the role of due process in courts in London and Middlesex County. For Levenson's story, we (eventually) find Newton prosecuting a case against the counterfeiter. So that's the first difference. Instead of having prosecutors, they had physicists (or whomever) arguing as plaintiff. And, on the other side of it, it seems defendants were often defending themselves. Of particular interest is the apparent fact that while Chaloner was probably guilty of everything we think of him as being guilty of (mainly forging coins and to a lesser extent paper instruments) Newton's case was largely invalid and should have been thrown out. For reasons I'm not entirely clear on, Levenson does not conjecture at any length or depth about why Newton tried the case in the "wrong" court (county instead of city, essentially) and why he pretty much fabricated one set of charges to reflect reality in some ways but to be factually utterly incorrect, and thus invalid, in others. Did Newton carry out a prosecution that an excellent lawyer would have easily undone (in the first case, or on appeal) in order to torment the lawyerless Chaloner, who does seem to go nearly insane with the idea that his conviction was tantamount to "murder?"

And there are, of course, other details of the legal system that would make a modern American first cringe, then think about the American Revolution some 75 years later, and then think "oh, that revolution certainly was a good idea." There are numerous key points in the American Constitutional system that one realizes are direct outcomes of abuses possible (and seemingly common) under the old British system.

Newton may or may not have tortured Chaloner or others he detained or prosecuted, but it is interesting that torture was officially illegal at the time, and Levenson discusses the legality and practice of torture over the previous century or so. I won't reiterate the discussion here; When you read the book you will find it interesting.

I spent several years as an archaeologist digging up 16th and 17th century European (including British) coins. Not many of them, but those that did turn up on early sites usually proved interesting and important. The early colonists in Boston carried vats of King James I farthings, which had become worthless and disdained, to trade with the Native Americans as though they were glass beads or bangles. The Natives in Massachusetts rolled the farthings (small thin copper disks with a tin plate) into tubes and used them as one might use a tubular glass bead. Flat farthings were found in Euro-colonial contexts (not yet traded) and tubulated farthings were found with trade goods or on Native sites (though this was uncommon). And there were other interesting things about digging up coins, but I have already digressed enough. My point is simply this: Reading in Levenson's book about the production of coins, the problems of valuation, international trade and value imbalances, counterfeiting, and so on was especially interesting to me because I dug some of those suckers up.

It occurs to me that I may have dug up coins actually made by Isaac Newton (well, under his supervision). Until I read Newton and the Counterfeiter, that had never dawned to me.

Another point: I had no idea there was a sex toy industry in 17th Century England. But of course, there would be.

I worked with someone years ago on a project looking into the evolutionary psychology of money, including the acceptance of both coins and paper as interchangeable or, at least, "worth something" in relation to, the usual human needs for which we are probably evolved to deal: Sex, food, shelter, whatever. Many humans have, indeed, incorporated money into their psychology. I was reminded of those readings, writings, discussions.

I had not really paid attention to the fact that Newton was mainly an alchemist for much off his scholarly life, and that this whole physics thing was sort of a side trip for him. If only he had insights of the sort he had for mechanics but for chemical bonds and elements.

Finally, Newton and the Counterfeiter: The Unknown Detective Career of the World's Greatest Scientist

presents a description of intellectual or academic life in England one or two "eras" before Darwin, contemporary with the early Natural Philosophers. That is not the intent of the book, but it serves that purpose and I enjoyed that aspect of the story.

Those were the days ... when a physicist could murder a counterfeiter in the name of the King

William Chaloner reminds me of a handful of people I've known. He possessed a sense of entitlement balanced by a remarkable capacity for greed and tempered with an acute sociopathy. He clearly had a keen intellect and extraordinary manual skill. When Isaac Newton murdered Chaloner (to put it the…

The other side of the coin(age): Newton and the Counterfeiter

Did you know that Isaac Newton had two jobs? One, you know about: To figure out all that physics and math stuff so we could live for a while in a Newtonian world. The other was as th big honcho of the Royal Mint. Where they make the money. In that second job, Newton had several interesting…

Newton and the Counterfeiter by Thomas Levenson

I've been enjoying Tom Levenson's "Diary of a Trade Book" series quite a bit (the latest post is on cover art), so when I say a stack of copies of Newton and the Counterfeiter: The Unknown Detective Career of the World's Greatest Scientist at the bookstore the other day, I snapped one up. As the…

Tom Levenson is a professor, a teacher of journalism and science journalism, and an Einstein scholar. He also knows a thing or two about Isaac Newton. One of my favorite non fiction books of all time is Newton and the Counterfeiter: The Unknown Detective Career of the World's Greatest Scientist…

"He possessed a sense of entitlement balanced by a remarkable capacity for greed and tempered with an acute sociopathy."

Sounds like someone we all know who just lost a presidential election.

"He clearly had a keen intellect and extraordinary manual skill."

Ok, so maybe not.

Great book. It is amazing how a government's unwavering blunder with currency control can create so much systematic chaos (yes, I think that's what it was). The people of the kingdom suffered and criminals made out, and everyday people shaved coins just to get by.

A somewhat fictionalized view of these events is found in Neal Stephenson's "The Baroque Cycle" series, well worth reading.