Taking Lego to the Max 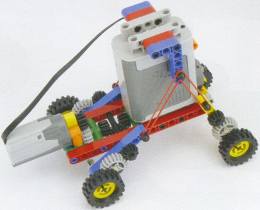 Huxley's Aunt and Uncle have given him, as Christmas and Birthday presents, various kits to make Imaginarium style train setups. Imaginarium is like Brio and Thomas the Tank Engine, but generally available as a Toys R Us Brand. He has enough cool bits and pieces to make a kind of double figure eight layout, but the ends can't ever be closed into a continuous loop because we don't have enough pieces of track. Or maybe we do. We keep trying different configurations but it never works. It also may be the case that while Huxley, Amanda and I make great Train Engineers once the tracks are set up, we make lousy Civil Engineers when laying them out. We need to hire a consultant.

This is the same problem with Lego. You see all these amazing Lego things people put together ... especially if you go to Lego Land at the Mall of America across town from here. But, when you start putting this stuff together, at first, it is hard to do because everything really has to be just right to make it work, especially if electronic motors and gears and stuff are involved. 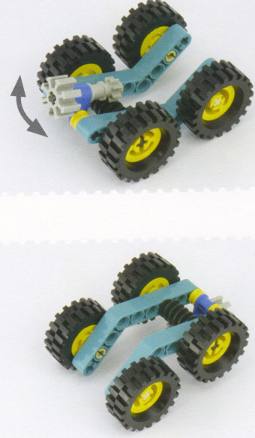 You can learn to make great Lego thingies through extensive trial and error, or you can hire a Lego consultant, or you can just get these books by Yoshihito Isogawa. I've got two of them (I think there may be three or four in total): The LEGO Technic Idea Book: Simple Machines

These are very smart books. There are no words in them, just a few on the cover and in the very beginning. It is all pictures, some of which I've pasted here to give you an idea.

The different types of blocks in a given picture are always different colors so you can easily see what is what. There are icons that tell you what kind of assembly you are looking at, and what principle is being illustrated, such as "turning" or "a door" or "putting something in or on something" and that sort of thing. As far as I can tell, it is pretty much one assembly per layout (two pages facing each other) with several angles and other helpful illustrations on each layout. The idea is that you can build the thing that is depicted by looking at what the illustrations (mainly photographs) show, and when you do so, you learn something about how Lego assemblies are made. 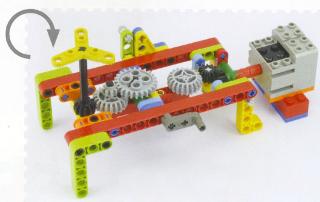 The books are divided into parts and chapters. So for the Wheeled Wonders

book, Part 1 has Motorcars, Cars that Spin Something, Cars that Move something ... Part 2 has Differential Gears, Steering, Suspension ... Part 3 has Combining Vehicles with Different Bases, Reversing After bumping a Wall, Using Pullback and Windup Springs ... Part 4 has Transmission and a special section called Cool Cars. Clearly, you can see the pattern: Increasing complexity as you move through the book, with later chapters building on earlier ones. 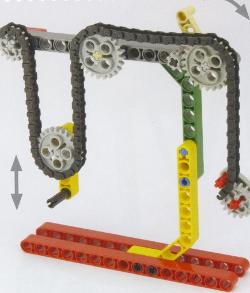 book has too many chapters for me to name them all, but it starts wiht basics (Gears, Shafts, Turntable, Angled Gears, Womr Drives, etc.) then covers power and motion (Chains and Treads, Rubber Bands, Rack and Pinion, etc.), then motors, more complicated chassis, doors, pulley systems, and eventually, amazingly, provided diagrams with instructions to make a couple of musical instruments.

The author, Yoshihito Isogawa, of Tokyo, is a Lego master and has written a whole bunch of books like this. Imagine having that job! 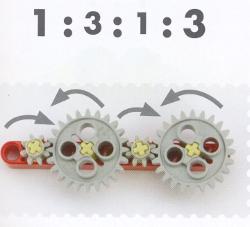 I think the idea here is that you build from the examples, mainly working from simple to complex, until you find yourself anticipating what the instructions would say, and eventually getting to the point where you don't need them at all. Thereafter you'd probably find these volumes handy as references in your Ultimate. Geek. Library.

The Unofficial LEGO Technic Builder's Guide by Pawet "Sariel" Kmiec (Second Edition) tells you how to build machines, models, robots, etc. that will work. You need to construct these things in a way that ensures they won't easily fall apart, and that requires a certain amount of engineering.…

Lego Technic is a Lego based technology that includes a combination of totally new kinds of Lego pieces and fancy technology that lets you build some amazing things. You can get kits that range in cost and sophistication from the LEGO 8514 Technic Power Roboriders a sort of motorcycle for robots…

I know a lot of you are looking for ideas for science-related children's presents for Christmas or whatever holiday you like to celebrate this time of year. I have a couple of ideas, and hopefully you will add some of your ideas below. Not everything that helps encourage the skills of scientific…

How to make your own robot

Want to make your own robot? You can do this the easy way, or you can do this the hard way. Or, both, if you like. The basic home made robot is a robot because it moves around, and the way that is usually achieved is with two independently powered wheels, a third wheel (or something) to balance…

This here must be the most impressive Lego machine I've see so far:
http://www.youtube.com/watch?feature=player_embedded&v=sUtS52lqL5w