As you know, as part of a fund raiser for the Secular Student Alliance, I wrote a novella called Sungodogo, which I've since made available on Amazon for the Kindle (and in other formats ... I'll have a print version in January some time). The book is about a handful of people who travel across the Congo in search of an elusive primate. What they find instead is quite unexpected. Yes, there are elusive primates but not at all what was expected. The story then becomes the origin story for the modern Skeptics and Secular Movements, and explains the rise of anti-feminist haters like those of the famous "Slymepit."

One of the members of that movement, Michale Cortese, who uses the the line pseudonym "Mykeru," has started to write negative reviews of the book in order to damage me and my reputation and to damage the book's value as well. Here is the twitter tweet in which he brags about this: 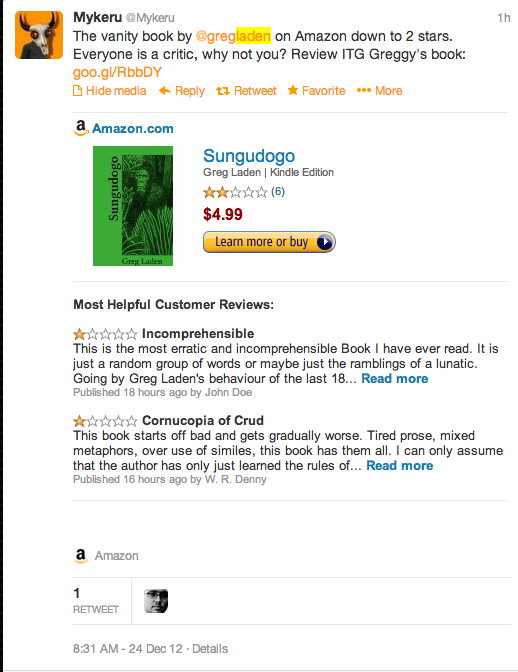 In this tweet, he is asking his friends to write one star reviews of my book.

There is a great irony here. The book is about the origin of the very fight that Mykeru is engaged in here. It explains the origin of modern sketpics organizations, the problem of sexual harassment at conferences (and the purpose of that sexual harassment) and ultimately explains why there was so much pushback against Rebecca Watson when she said, correctly, "guys, just don't do that" in reference to some rather thoughtless behavior on the part of some guy she ran into at a conference.

The book is, of course, tongue in cheek. It is project meant to be fun, to draw attention to the wonderful students of the Secular Student Alliance, and at the same time, tell an adventurous and rather realistic (up to the part where it gets all weird and impossible) and entertaining story.

And now, the book, and the secular movement, and feminism, and me, and everything else, are being attacked by Michael Cortese and the slyme pit.

So, I need your help with something. I don't need you to buy the book. I'll give you the book (an electronic copy of it) ... all you have to do is ask. But if you do buy the book, 100% of the proceeds will go to the Secular Student Alliance. What I do need you do to is the following two things, please: 1) Go write a good review of the book to offset Mykeru's, or at least, down vote the bad reviews he or others at the slymepit have obviously written; and 2) do something supportive for the secular student alliance. Join, donate, support, something. Preferably, donate. (Obvoiusly I don't want anyone to write a review who has not read the book, needless to say.)

Let's not let the slymepit have their way.

And seriously, if you want a copy of the book send me a note and the format you prefer to have it in. I'm making a revised version now, it will be done in about three weeks, I'll send you that one.

Thank you in advance.

UPDATE: I just noticed, because of a link to my blog, that Myeru's latest hate video (hating me, Ophelia Benson, others, I'm told, though I havn't seen it) is feature in this blog post on the site A Voice for Men (isn't that one of those sites listed as a hate site by the SPLC?) which seems to link the MRA movement, for which I'm sure Mykeru is some sort of saint, with JP Rushton's racist doctrine. I did not know that Rushton's pseudoscientific racism was held in such high esteem by the Men's Rights Activism movement, but the link between Mykeru and the Slymepitters and the MRA movement has long been clear. Recent (mild) attacks on me for my activism against climate science denialists by members of the MRA/slymepitter group sort of tie it all together. They are just a bunch of bad people.

Though his call for doing this was distasteful and dishonest, I wouldn't call 3 bad reviews from a person with only 223 followers an attack- I'd call it a weak and boring attempt at slander. I'll definitely read the finished work, and provide a review though, as I do recall enjoying the preview.

I'd be interested in reading and reviewing. I have a Kindle

I have been lamentably lax in not ordering the book. I shall do so right away.

Not many reviews there Greg - did what I could - hope it's not off base :)

I'd love to read the book and write a review, if you don't mind sending me a free copy. I'd love to buy it and support the SSA, but I can't really afford it right now.

Hi Greg, I'd be happy to read it on kindle and give my "primatology perspective" in what I'm sure will be a good review :-)

Not sure about supply here in the UK but would love a copy and will certainly pen a review to show European interest to the back biters. PDF if possible and when available?

Sent to remi, erin, joe. Let me know if it does not arrive (Joe, there was some balking by the internet for your email, but I think it went through).

Mykeru is a shameless did. He and his friends should be flogged. Can you please add that to the revised edition?

I'd go with a simple pdf right now. Then, I'll wait for the hardcopy.

I would love a copy (MOBI) and will be happy to write a review.

I reported one of the comments for libel:

"The preview was enough for me. It was so bad I had no desire to read more. When the author has to offer free copies of his book to people to get them to write five star reviews, that's often a sign that the book is no good."