Alfred Russel Wallace was born on this day in 1823 (he died in 1913). You know of him as the other guy who invented a theory of Natural Selection which was very like Darwin's; they published the theory together. He also spent considerable time traveling around on boats in the tropics, like Darwin did, and collected one or two items that made it back to to various museums.

One of the most awful tragedies of 19th century science happened to Wallace, when on July 12th, 1852, the ship he and his very important and interesting insect specimens, and notes, that he was taking back to the UK from the Rio Negro area caught fire and sank. He and others survived in a life boat and were eventually picked up. 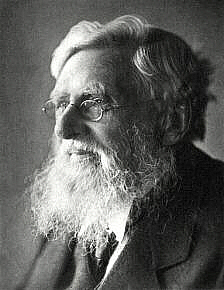 He wrote some stuff, including Darwinism

, and numerous academic papers, and much has been written about him, including Alfred Russel Wallace: A Life

, and The Heretic in Darwin's Court: The Life of Alfred Russel Wallace

Greg, folks should know about the Wallace Memorial Fund, as well as its Wallace Correspondence Project and Wallace Online (from historian John van Wyhe who put together Darwin Online):

Also, money is being raised for a Wallace Statue for the Natural History Museum in London (by January 31st):
http://wallacefund.info/statue

Thanks for the links, Michael!

Also, the book "A Rediscovered Life" is Discovery Institute published and promoted bunk about Wallace advocating for intelligent design. Flannery is a fellow of the DI.

You mean the one I just DELETED.??

It is worth pointing out that 2013 sees the 100th anniversary of Wallace's death and numerous events are being planned around the world from Australia to the UK to celebrate his life and work. For more information see http://www.nhm.ac.uk/nature-online/science-of-natural-history/wallace/i…