The Superbowl and God

The Public Religion Research Institute has conducted a poll about the Superbowl They found:

27% of Americans believe that God plays a role in determining which team winds a sporting event.

By religion, there is variation in the percentage of people who believe that god determines the outcome of sporting events, or that god rewards athletes of faith. They have a graph: 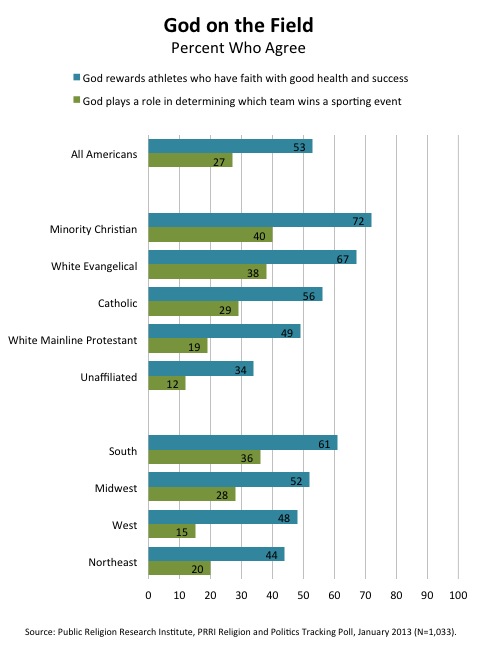 50% of Americans are fine with athletes making public shows of their religiosity during a sporting event. An amazingly low 4% don't approve. Which is funny, because every single person I know disapproves of this, religious or otherwise. I suspect this may be the way the question was asked (in this poll, 45% don't think it matters).

And now, for the scary bit, the part that proves that most Americans are not patriots:

Nearly 9-in-10 (89%) Republicans agree that public high schools should be allowed to sponsor prayer before football games, compared to more than three-quarters (77%) of independents and nearly 7-in-10 (68%) Democrats.

Are those same people also against due process, freedom of speech, and the right to own a firearm? I think not. Makes no sense. Why religiously believe that failing to have strong beliefs that conform to the Constitution makes one evil, except here and there? WHY?

The survey is here.

Aren't you excited? The Superbowl is tomorrow! OK, I know, most of you probably don't care. I know I don't; tomorrow is a lab prep day for me, and I'll be setting up fly stocks all afternoon. I don't even know who is playing, and I don't really care. Some of you might, and that's all right — my…

A poll released last week found that a substantial chunk of Americans think that humans were created 10,000 years ago, and evolved over millions of years. Frank Newport, editor-in-chief of the Gallup Poll explains that and other insights by pulling together their data on public views of evolution…

19% of Sanders supporters would throw Clinton under the bus

A new poll (March 24th) by Monmouth University says, "Among Democrats who support Bernie Sanders for their party’s nomination, 78% say they would vote for Clinton over Trump in November, while 12% would actually vote for Trump and 7% would not vote at all." The Republicans have a similar problem,…

Question below about the details of what conservative Democrats or liberal Republicans might believe, etc. I decided to look for a few questions. I removed Independents because their sample sizes are a bit smaller. I clustered all those with socioeconomic status 17-47 as "Low" and those from 47-98…

I think that if they asked if muslim prayers can be said at the beginning of high school football games the answer might be different. I have tried to find the story of the Christian who finally understood why people object to prayers at the start of games when a University of Hawaii game opened with a prayer from one of the aboriginal religions. (Light Bulb!)

The only prayers that should be said prior to a sports game are Mauri prayers.

Roughly translated (my Mauri is not up to date):

"The storm is about to break; The storm becomes fierce; (Sounds of a fierce storm); We are fearless, we are excited to defeat you, we are dominant and supreme, arrrrrgh!!!!! We are totally gonna kick ass."

That story came from, of all places, the World Nut Daily about a Buddhist prayer at a high school game:

Re: "And now, for the scary bit, the part that proves that most Americans are not Patriots ..." Yep, and neither is god. For if she were, the Pats would indeed be playing tomorrow. Q.E.D.

Wait a minute ... Did I misquote Greg? Damn, must be these meds.

I say just "Lance Armstrong". He had success and good health after the cancer... it means that faith and doping go simply together...

Joe: Yes, the fact that the Vikings are not in the Superbowl is a testament to the weakness, or possibly the non-existence of, Odin.

Mauro: Cheating and religion certainly go together quite often!

And 100% believe that Greg doesn't know how to use a spell checker.

Greg: I personally favour the hypothesis that a god's power is at least partially determined by number and fervor of worshipers (which helps explain why they are all so eager to be worshiped), so I am willing to grant that Odin is pretty weak these days. However, even if he were at full strength, I am not sure he would be inclined to grant victory to a bunch of posers who persist in perpetuating the fallacy that vikings had horns on their helmets.

If these athletes are asking for god's assistance before an event, and believe that they will receive it, doesn't that count as cheating?

Mike, it depends on the sport.

It certainly would be in rowing (if the assistance were received) as the rules specifically state that "the boat shall be propelled solely by the efforts of the crew at the oars".

I couldn't finish reading your article. I was too distracted by the spelling errors. If you can't or forgot run spellcheck/proof your work, how do you expect anyone to trust your data?

Some people spell it Super Bowl and some Superbowl. Personally, I don't really care.