"I hate that expression, 'fusion.' What it means to me is this movement where nothing ever really fused." -Wayne Kramer

Welcome to another Messier Monday, where each week, I pick one of the 110 Messier Objects -- deep-sky objects catalogued to avoid confusion for comet hunters -- to highlight and detail. 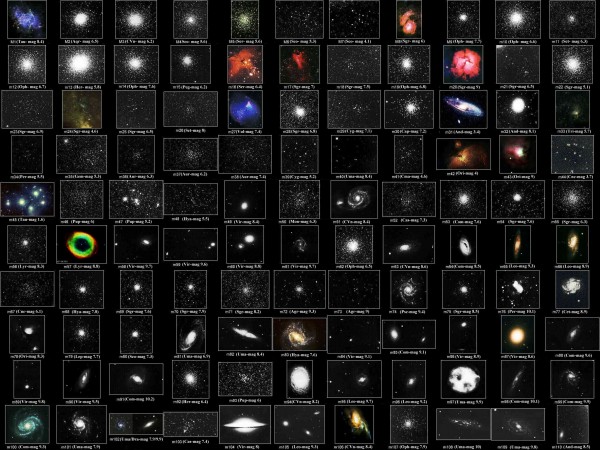 This week, I'd like to highlight one of only two star-forming nebulae visible to the naked eye in the night sky, and I want to do it before it disappears completely for the year! Visible for just an hour or so after sunset right now towards the southwest portion of the skies, I'd like you to meet the Lagoon Nebula. 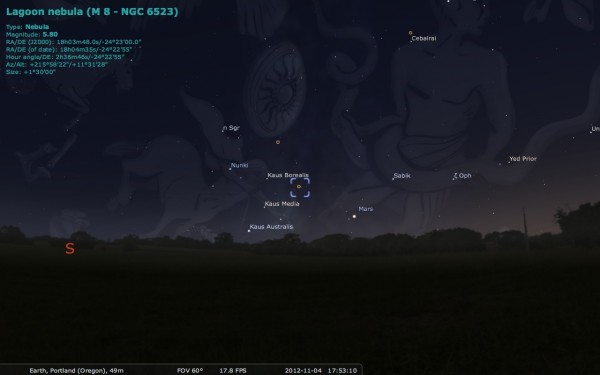 In the constellation of Sagittarius, one can find a pattern of stars that strongly resembles a teapot. Although this collection of stars is much more easily visible during the middle of the year, you can find it low on the horizon for another few weeks before it disappears completely. The planet Mars is not far off for the time being, found just a few degrees away.

But if you take a close look just above the spout of the teapot, there's an extended object that's just barely visible to the naked eye (or clearly visible through binoculars) right now under good, dark skies. 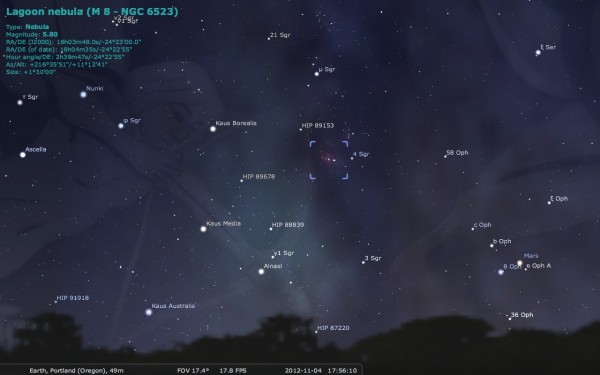 There's a faint, fuzzy cloud that's maybe a degree-and-a-half across on the sky, that appears reddish in photographs and a dull, greyish color to the naked eye. But inside that cloud is one of the richest stories of cosmic rebirth, a story told in every such star-forming region in galaxies across the Universe. 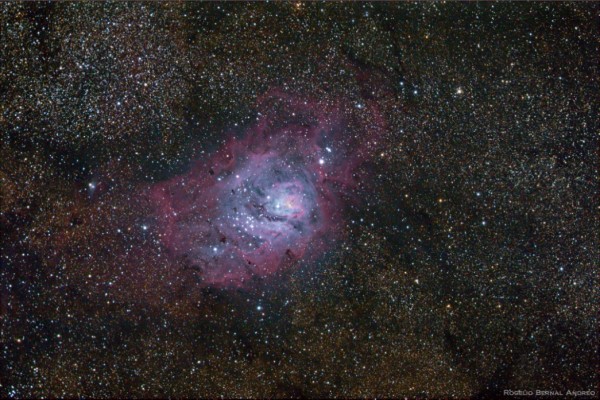 The reddish color is from ionized hydrogen atoms recombining with their electrons, while the blue is from bright, hot, young blue stars having their light reflected off of the nebulous gas behind them! Regions actively forming stars emit both of these characteristic colors, although sometimes one type is far more prominent, dependent upon how the image is photographed. 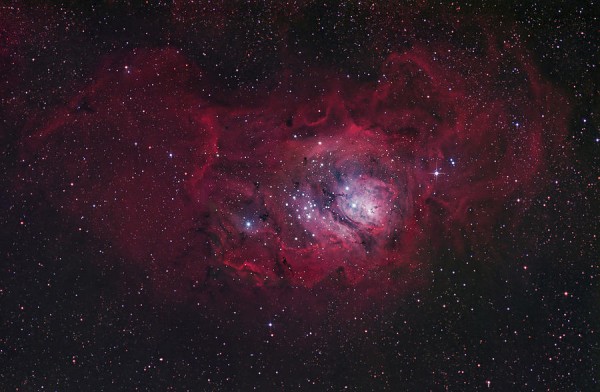 For example, the above image, by Robert Gendler, really brings out the extended hydrogen gas in red, while it practically swallows the blue, reflected light. However, that blue light really does stand out around a few very bright blue stars. Unlike in the Pleiades, the blue stars here are so young -- maybe 2 million years at the most -- that many of them are still class-O, the hottest one, and will die in a catastrophic type II supernova explosion! Those stars, part of a star cluster contained within the Lagoon Nebula, clearly stand out in the image below. 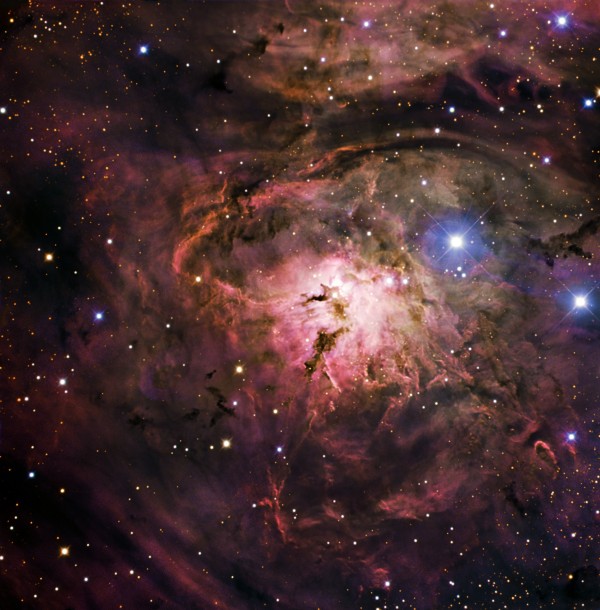 This enhanced-color image of the heart of the nebula shows a few interesting features, including the bright, illuminated part known as the hourglass nebula, as well as the lagoon-shaped dark lane above it that gave this nebula its name.

Located four-to-five thousand light years away, there are only perhaps 50-100 stars discovered within the nebula itself. This is very small for an open star cluster, and is further evidence -- as if the red hydrogen weren't enough -- that the region is still in the process of forming stars.

With no frills or special filters, here's what the nebula looks like with just a long-exposure on a good-quality amateur telescope. 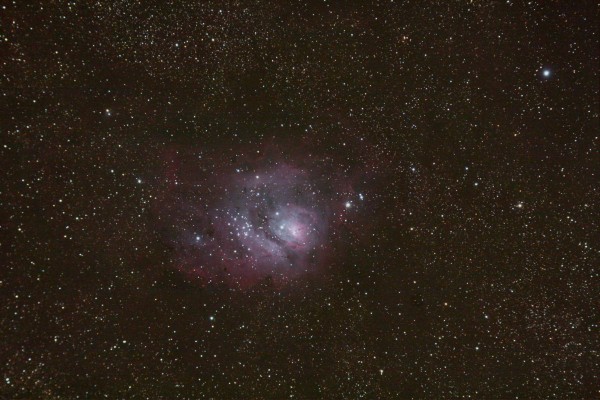 You may notice that the background of stars appears very dense around this nebula, and that's no accident.

The Lagoon Nebula has the good fortune (or misfortune, depending on your point-of-view) of being located directly towards the galactic center, as this composite zoom image -- courtesy of Gigagalaxy Zoom -- shows. 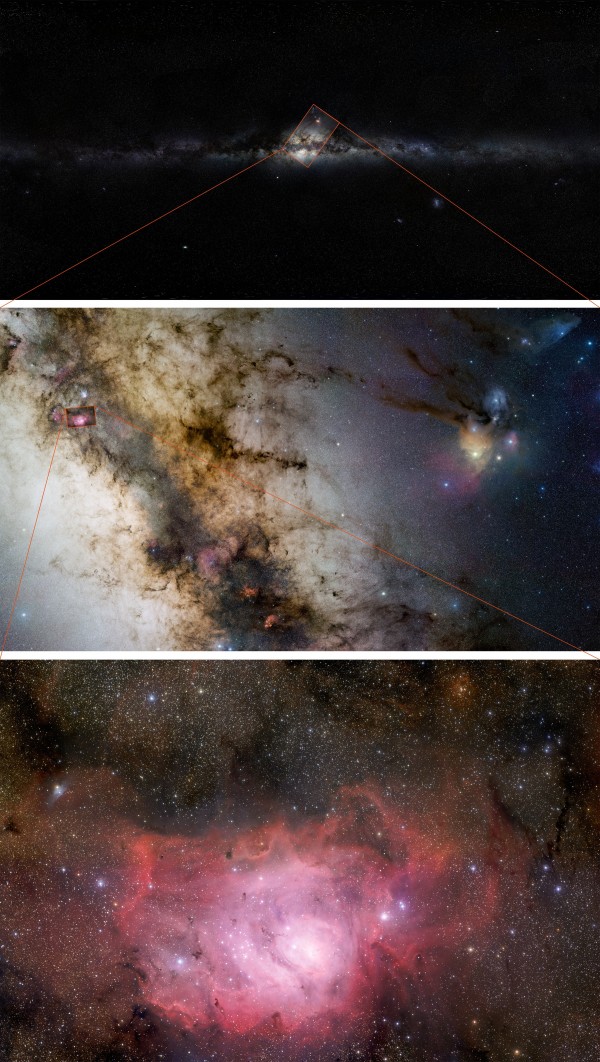 Very likely, this star cluster will continue forming stars for at least hundreds-of-thousands of years more, and possibly millions of years more until the star-forming gas is all gone.

As always, viewing this nebula in a different part of the light spectrum -- such as the infrared -- will highlight vastly different components of the nebula.

In this case, thanks to the ESO's Vista telescope, the warm (but not hot) gas is shown, as are the newest, hottest stars.

How many stars will eventually form here? Likely many hundreds and possibly even a few thousand, many of which won't be visible until the light-blocking gas and dust have evaporated. We know that this is still an ongoing process because of the dense molecular clouds --  light-blocking Bok globules -- that are still visible in the foreground! 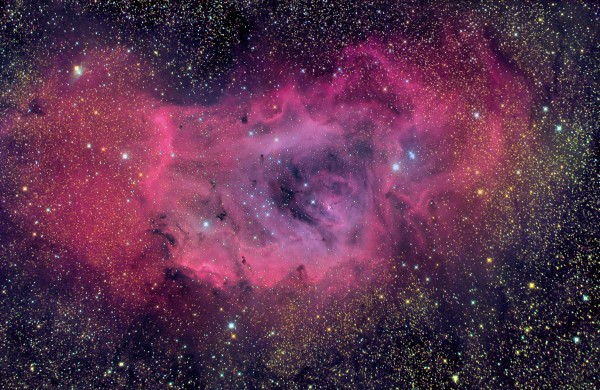 However, the coolest visualization of the Lagoon that I've seen was this natural color composition, created by J-P Metsavainio: 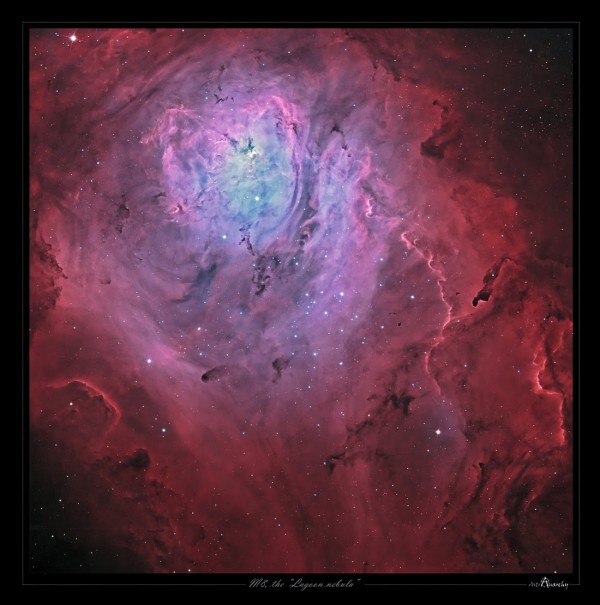 The thing that was amazing about this is not the image itself, but that the artist who created it managed to make a 3-D animated composition of it, which is absolutely breathtaking! (Please be patient while it loads from here. If you need to kill some time, visit the artist's zenfolio site!)

And that's the Lagoon Nebula, just the 8th object in Messier's catalog. If you miss it now, you'll have to wait many months for the opportunity to see it again!

Although this series is still new, I'll start making a list of all previous Messier Mondays for you to catch up on at the bottom of each new one, including today's:

I'm familiar with electron tomography, but I'm curious how the 3D reconstruction of M8 was made. Observe M8 for 6 months? At 4 to 5k ly away, I wouldn't think the angle created would be enough to yield such a good reconstruction.

Damn!!!!!
Still starring at it

The 3-D model was created by an artist using estimates for the size of the cavity based on a variety of data -- but not based on any real geometric parallax.

In other words, it's a very nice, very educational, artist's impression.

Ethan--thank you!! I teach biology, but I'm a physical science junkie too, and the Messier Monday posts are a fantastic way to start the week. I'm working on my own Dobsonian telescope now (I hope to have it completed before Halley's comet returns and I'm way too old to lug it down the stairs), but for now, your posts are prompting me to venture out of town in the wee hours of a Sunday morning with coffee and binoculars. Thanks for these posts!!!!

This is the best series on the net. It almost makes me want to go back to school and study astronomy.

Unfortunately, the UK isn't well placed to see M8 or many of the summer nebulae around Aquila and Scutum.

Too low and, nowadays, far too crappy a sky quality.

One day I may travel to the south of france to stay for a bit part way up the pyranees.