Prediction: “It will be a girl. At least one of her names will be Diana.”

When the Royal Baby is born, any time now, it will be a girl, according to about 67% of some 50 psychics recently surveyed. If the psychics were guessing randomly, we would assume that about half of them would say "girl" and the other half would say "boy" but with a full 2/3rds saying one thing, we have to assume they are on to something. And, the lead psychic apparently said that one of the girl's names will be Diana. At least one of her names. So possibly two of her names. She might be Diana Diana Diana Windsor. Apparently, this is a possibili...

...wait, what? The baby has already been borned? Excellent! Now we can find out what she will be named?

What? The Royal Couple has not named the child yet, or a t least, not released the name? Well, no matter, we know one of the girl's names will be Dia.... 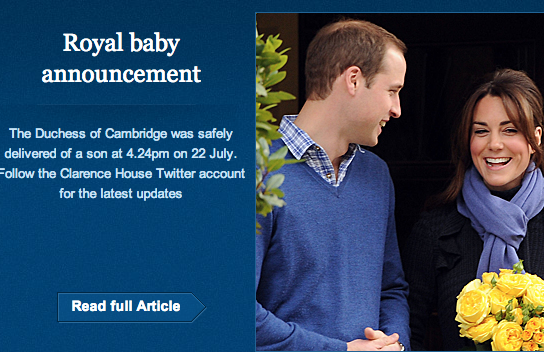 Huh. The psychics were mostly wrong. About everything!

Who would have predicted that?

Not these guys, apparently.

In the car, on the way from day care to campus to watch a softball game DADDY: So, what did you do at school today? STEELYKID: Daddy, I'm a superhero. They call me Strong Ninja Girl. Strong World-Saving Ninja Girl. DADDY: Because you save the world? STEELYKID: Right. And M____ is World-Saving…

I was catching up on reading at Female Science Professor's place and came across her post: Women Girls. FSP, as far as I can tell, seems to be saying that the young ones these days are all hip with the term "girl" for women even into their 30's because...I don't know why, it's a peer thing, and…

What's in a Name?

I am obscurely glad to learn from this Times human-interest story that Kansas center Sasha Kaun is from Russia. Otherwise, he is at the age where any parent naming their child "Sasha Kaun" would've had to deal with everybody thinking "Sasha Kaun Sasha Kaun everybody Sasha Kaun..." Yes, I am both a…

Writing in 1866, John Venn (of Venn diagram fame) wrote: To many persons the mention of Probability suggests little else than the notion of a set of rules, very ingenious and profound rules no doubt, with which mathematicians amuse themselves by setting and solving puzzles. A classic example is…

They are sacrificing the first prediction for the payoff of winning points on the second. If there's a high % that a girl will have 'Diana' in its name, then that's a prediction you can safely make, but only by first predicting it's a girl. Even if the probability of 'Diana' being used for a girl is not high (I'm no expert on how royal names are chosen, but skeptical on this) then you still get to play to people's emotions who want a Diana, which is what making 'psychic predictions' is really about.

I predict the new royal will be named Steve (or possibly Jethro).

Question: How does the construction

... was safely delivered of a son

Dean, British lingo regarding birth, etc. is fundamentally different than American. A woman "falls pregnant" and is later "delivered" of the child.

I predict the new royal will be George.

Your prediction is likely better than mine, but wouldn't KIng Steve (King Jethro) be cool?

Didn't realize common phrases differed so much. To me
"delivered of the child" makes it seem as though some illness has been remedied.

I like Jethro, but I'll go out on a limb here and predict that the new Prince will be named Williamanmary; a fine, traditional name too long lost from the Royal family. Alternatively, if they want to play to their (nominal) Saxon roots, Hengist is a good name. That way, he can have a wife (or horse) named Horsa when he matures.

To me “delivered of the child” makes it seem as though some illness has been remedied.

It's an archaic phrasing which reflects a time when a pregnant woman ran a substantial risk of dying in childbirth. In those days, a mother who survived the birth and produced a healthy child could indeed be said to have had a difficult medical condition remedied.

And you buy tickets from a guy that sells tickets for sold out events ... never a "scalper"

Albert (traditional family name, BTW the actual name of KGVI, father of Liz, who in honor of his own father chose George as a throne name). OTOH maybe Albert is considered a little too Belgian at this point, and the usual "Bertie" might remind people too much of Wooster. We shall see soon enough.

And George it is. How unadventurous.