iOS and Android edge out Windows and Linux

Below is the relative percentage of operating system use by the readers of this blog from a four month longs sample form the middle of the year last year compared to the most recent six months this year. There is not a lot of change, but notice the nearly five percent drop i nWindows use, which seems to be taken up mainly by an increase in the use of iOS. 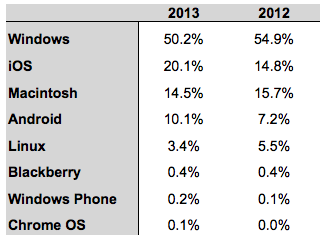 In addition, Linux use has dropped a worrying two percent.

However, really, OSX and Android etc. are all based on Unix-like operating systems, so the numbers for this year can be recalculated to look like this:

But really, Linux use is actually close to 100% among the readers of this blog. You are using Linux right now, since this web page is being served up on a Linux server. Also, Android. Adding this to the other Unix-flavor OS use, we get this:

Actually, iOS is based on OS X, and there is a Unix shell hidden inside, which you can access if you know how.