The race is on: Will Humberto break the record or Gustav break Humberto? (UPDATED)

The disturbance off the west coast of Africa that I mentioned earlier is now officially Tropical Depression Number Nine.

It is forecast that Nine will turn into a hurricane in about 72 hours, though one model suggest much sooner.

The last time that no hurricane formed in the Atlantic before September 11th was ... well, never (for the period of good records). So if the Nine becomes Humberto (that's the next name on the list) a little late, on the 12th, Humberto becomes a record storm, of sorts ... the first hurricane after the longest delay in the Atlantic. If, however, Nine becomes Humberto on the 10th, which is distinctly possible, then no dice ... we have an unusual year but we don't beat the old record.

But what happens if Humberto forms on the 11th? There's a pretty darn good chance of that happening.

Well, then, I suppose it will depend on exactly WHEN Humberto becomes a hurricane ... or is declared a hurricane?

According to records at the National Weather Service, Gustav, in 2002, was declared a hurricane at the noon update (UTC):

So, what do you think? Will this be a record year or not? Will Humberto displace Gustav? Will Gustav stand? Will they become hurricanes simultaneously (as it were)?

The NWS is currently projecting Humberto to become a hurricane on the 11th. Or maybe a tiny bit sooner, but most likely, before noon on the 11th. Here are two projections that are slightly different that came out a few minutes ago: 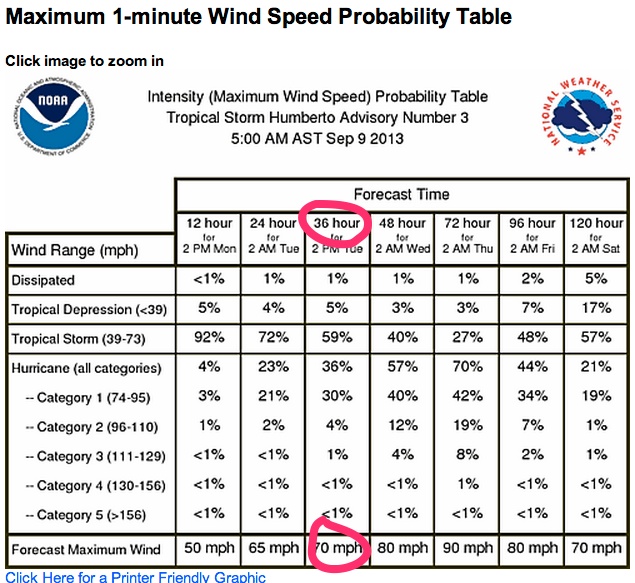 Too bad, it looks like this will not be a record!