There is a storm (this one) moving across the southern part of the United States that forecasters predict will turn north over the Atlantic and menace the east coast somewhere between Northern New England and Washington DC or Virginia, possibly much of that area. The storm may develop, forecasters say, into a Nor'easter. I looked at the predicted Jet Stream configuration for next Wednesday and I noticed that is will be all curvy-durvy like it has been so often lately. This curvy jet stream is so much more common these days because, climate scientists think, of the phenomenon of Arctic Amplification. This is when the Arctic warms more than other parts of the globe, relatively, causing a shift in the way large scale weather patterns set up. The curvy jet stream blocks weather patterns, making them stay in place for much longer than they otherwise would. Flooding in Calgary and Colorado this summer, and a number of other major weather disasters, were caused by this.

I'm not a meteorologist so I feel comfortable going out on a limb to make a prediction about the weather because you can't possibly think less of me as a weather forecaster if I'm totally wrong. Usually, we make note of the "Weather Whiplash" events, extreme weather caused or enhanced by climate change, after they happen. Here, I'm going to suggest that this curvy jet stream is going to enhance the storm and an especially bad Nor'easter will be closing in on the US east coast just in time to really mess up Thanksgiving; this storm will be bad because the jet stream will pull together southerly moist air and northerly cold air, and keep it all churned up in place for a relatively long time.

And no, I'm not going to bet any money on it. Hell, I might delete this post if I'm totally wrong. Feel free to yell at me in the comments.

Here's the Jet Stream prediction for next Wednesday from HERE: 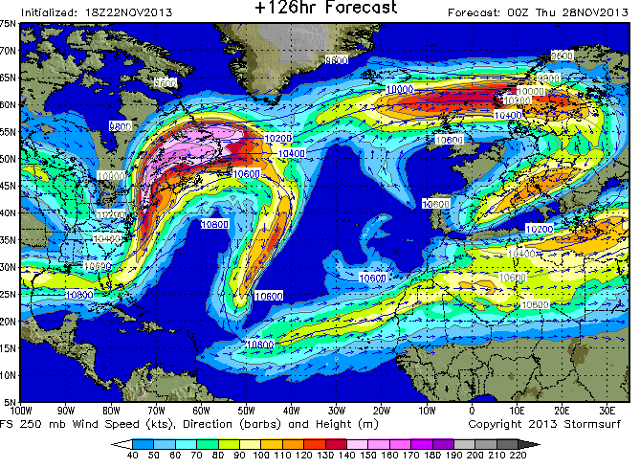 (The image at the top of the post is a random bad weather photo of no particular significance.)

Stop complaining about Storms,Jack!.Americans shit in Rivers and Dump Battery Acid in Springs - Lou Reed... In fact it's about time to Censor "The Weather" just like everything else you "DUMBED Down Americans" are afraid of. 'Ofisial Gubermint Odor' to Remove the above article cuz it be scairing the sheeple of amerika.lol STICK A FORK IN IT,UR Done

Does yelling I'M MAD AS HELL AND I'M NOT GOING TO TAKE IT ANYMORE" qualify?

My Thanksgiving travel plans involve dinner with friends who live two blocks away, so unless the neighborhood loses power, I'm good to go. There are reasons why I don't travel long distances for Thanksgiving, one of which is this kind of scenario.

This reminds me -- Is your turkey filleting post available somewhere on the internet?