How much global warming is there in terms of atomic bombs? The Hiroshima Widget.

On August 6th, 1945, the United States military detonated what was to date the largest and most terrible bomb ever created by humanity in the city of Hiroshima Japan. Since that time, the word "Hiroshima" has come to mean awesome power. In fact, the energy released by this bomb is beyond comprehension by the average person. Aside from the unbelievable power associated with that one human made machine, we also think, when we think of the bomb dropped on Hiroshima, of horrible consequences arising from human activity. It does not matter what one thinks today of whether or not that bomb should have been dropped or how the bombing of Hiroshima and Nagasaki influenced the end of World War II in the Pacific; the war was a horrible thing, and in both Germany and Japan and their captured territories the loss of human life and destruction of property needed to end the fascist regimes that controlled those countries was beyond measure.

For these reasons it seems appropriate to describe what humans are now doing with many of their other machines to the planet and by extension to themselves with the virtually unchecked alteration of the chemistry of the Earth's atmosphere in terms of Hiroshimas. And when we do this, the result is astounding. The addition of extra greenhouse gases to the atmosphere by burning fossil fuels causes the atmosphere to retain more heat than it otherwise would. This has enormous consequences. A huge amount of the world's water is normally trapped in glaciers, and these glaciers are melting. The ocean absorbs about 90% of this extra heat, which causes it to expand in size. Between the melting of the glaciers into the sea and the expansion of size from heat, unchecked emission of greenhouse gas will eventually cause sea level rise to the extent that most of the world's large settlements will be inundated, and huge expanses of cropland that supply our food will be ruined. Accelerated melting of the Arctic has caused a change in weather patterns that causes "stalling" and "blocking" events to occur many times a year instead of now and then. These events cause huge floods in some areas and "flash droughts" in other areas. The additional energy added by this accidental and catastrophic transformation of our planet to the atmosphere and the sea has caused an increase in the frequency of major storms and has increased the strength of these storms on average, and in addition, tropical storms of a given magnitude have more severe effects because of sea level rise. And more problems beyond this have happened and will happen in the future.

So, how do we describe this awesome (and I use the term "awesome" with its more traditional definition, not as a good thing) increase in energy in terms of "Hiroshimas" ... how many atomic bombs per unit time is equivalent to the increase in additional, unwanted energy in our atmosphere?

No. None of those numbers. The actual amount of energy added to our atmosphere because of the effects of human-caused changes in its chemistry is four. Four Hiroshimas per second.

There is now a widget you can put on your blog, or if you like, use as a Facebook or iPhone app, that demonstrates the addition of energy into our atmosphere in terms of Hiroshima's. From the creators of the widget: 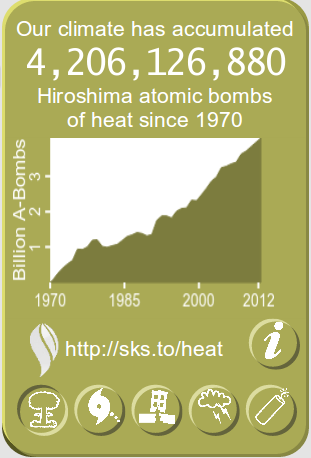 Our climate is absorbing a lot of heat. When scientists add up all of the heat warming the oceans, land, and atmosphere and melting the ice, they find our climate is accumulating 4 Hiroshima atomic bombs worth of heat every second.

This warming is due to more heat-trapping greenhouse gases in the atmosphere. The burning of fossil fuels means we are emitting billions of tonnes of carbon dioxide every year. This is the main contributor to global warming.

To communicate the sheer amount of heat our planet is accumulating, we have created this widget, embeddable on blogs and also available as a Facebook app, an iPad app, and an iPhone app. To help get the word out on just how much global warming our planet is experiencing, add the widget to your own blog or use the widget on Facebook, like it and share it.

To get the iPhone or iPad app, visit this site on your device and use the big “Get...” button to get instructions. The app is not available through the Apple App Store.

You can get your own copy of the widget HERE.

You can find out more about it HERE.

That is pretty staggering and a great app - I'd already seen the sidebar on your blog and was wondering about it - good to find this and get the answer here. Thanks Greg Laden.