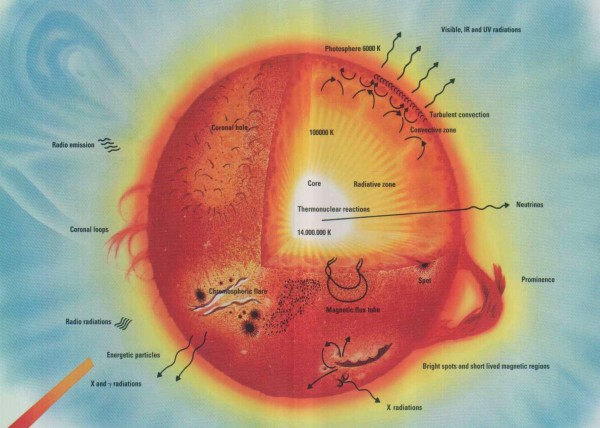 But after about 10-12 billion years total, all the hydrogen that can be burned in the core will be used up! (There will still be hydrogen in the outer layers; a star our size is not fully convective.) At this point, the core's temperature will increase until the heavier elements can be burned: helium into carbon, nitrogen, and oxygen, perhaps even then into neon. The Sun's outer layers will expand, as our star becomes a red giant.

To get to this point takes many billions of years, and is the fate of all stars between about 40% and 800% the mass of our Sun. But when that internal fuel is exhausted -- when the burn-able helium is used up -- what comes next? If the star were more massive, the core could collapse and we'd get a supernova, but our Sun, like most stars, is nowhere close to that.

The next step, and this only takes about 10,000 years, a blink-of-an-eye in the lifetime of a star, starts with the red giant ejecting the outer layers of the giant hydrogen envelope. 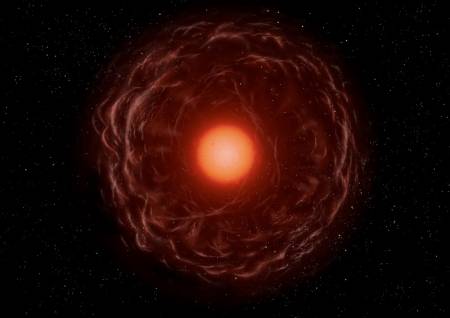 Meanwhile, on the surface of the star's core, a shell of hydrogen continues to burn, one of the last stages of fusion in a star like this. As the outer hydrogen layers continue to burn off and undergo ejection (through a process known as mass loss), the interior of the star continues to heat up.

As this process goes on, high-velocity winds are produced (like, over 100,000 miles-per-hour), shocking and shaping the gas. When it's all done, we get a planetary nebula from the outer layers, and a contracted white dwarf star at the center. 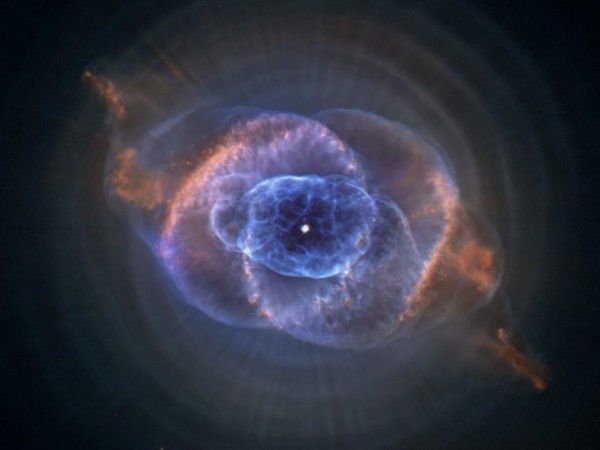 But I skipped the most interesting part! Before you get a white dwarf, before you get the hot, ionized planetary nebula, you go through this process of blowing off these outer layers with high-velocity winds. You wind up with dusty regions where the star is not yet hot enough to ionize the gas, collimated jets which can shine through the dust, and periodic, ring-like layers from the outward-moving gas.

With just 10,000 years, wouldn't it be something to catch one of these stars in the act? 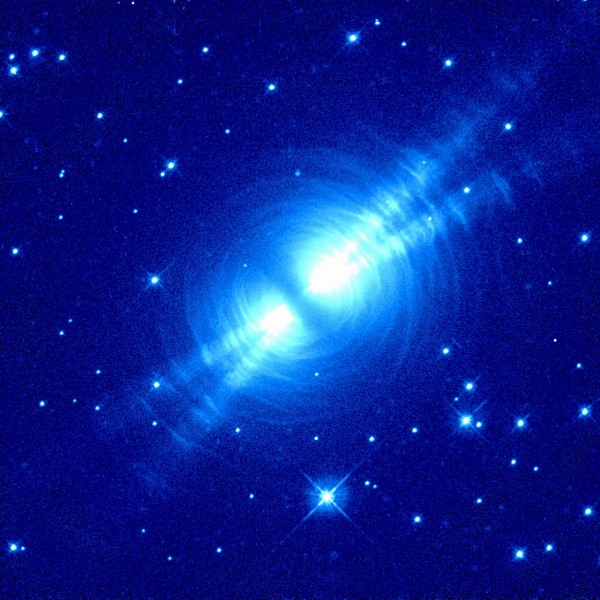 What you're seeing is known as a preplanetary nebula! (Or, a protoplanetary nebula, for those of you who promise not to get it confused with a proto-planetary disk, which forms at the beginning of a star's life, not the end!) This was the Hubble Space Telescope's first view of the Egg Nebula, the most striking example of a pre-planetary nebula I've ever seen, and the first one ever discovered, less than 40 years ago.

The dense cocoon of dust shrouds the central star and hides it from our view: the star is not yet hot enough to ionize all that gas. However, this "cocoon" is asymmetrical, and in regions where the dust is thinner, light escapes, producing this four-beacon effect. We can learn even more about it by looking in the infrared, which measures warm gas. 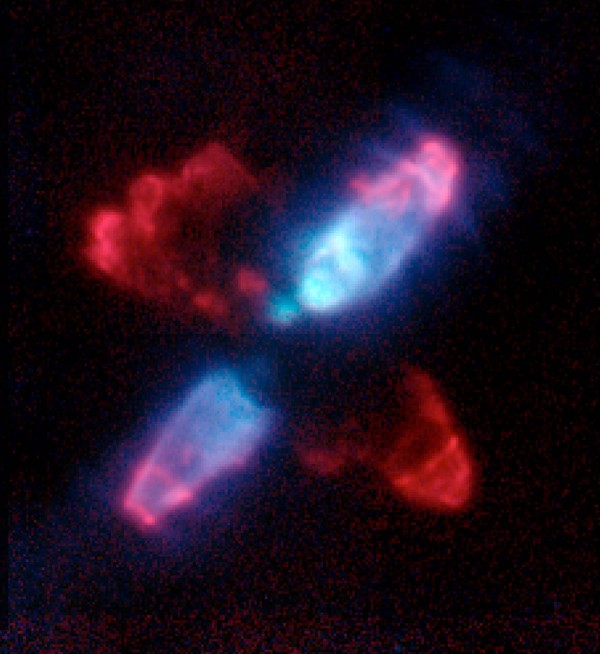 While the hottest part is in blue, the most interesting part of the above image is the red signature, which indicates hydrogen gas! Because we can't see the star, we know that the hydrogen isn't fully ionized; it can block the light. But it is warm, and as the star continues to heat up towards the magic number of 30,000 K, eventually the light will be of high enough (UV) energies to ionize that gas and reveal the star inside.

One of the things that's interesting is that the light coming from the Egg Nebula is polarized, as this 2003 false-color image, sensitive to different polarizations, shows. 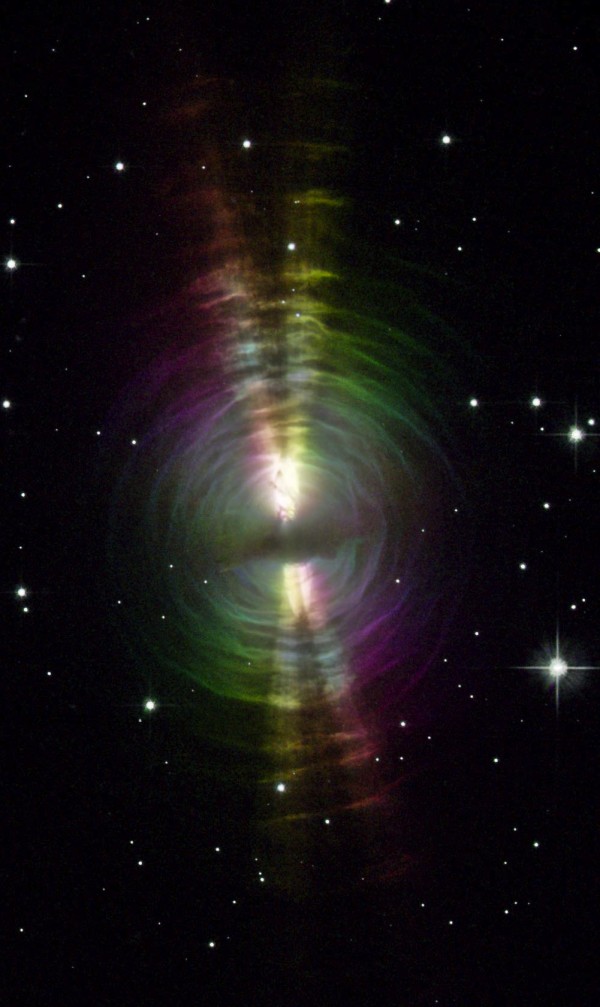 Different orientations of reflected starlight produce different results through a polarizing filter, and hence the difference in color shown in this image. The white areas are indicative of very dusty areas, where the light gets reflected/scattered many times, and hence doesn't come out with a single, mostly uniform polarization.

But that was then. Released earlier today is this latest, composite image taken with Hubble's WFC3 camera. The view is spectacular, and really gives you an appreciation for just how monstrous this dark, dusty disc around the dying star is. 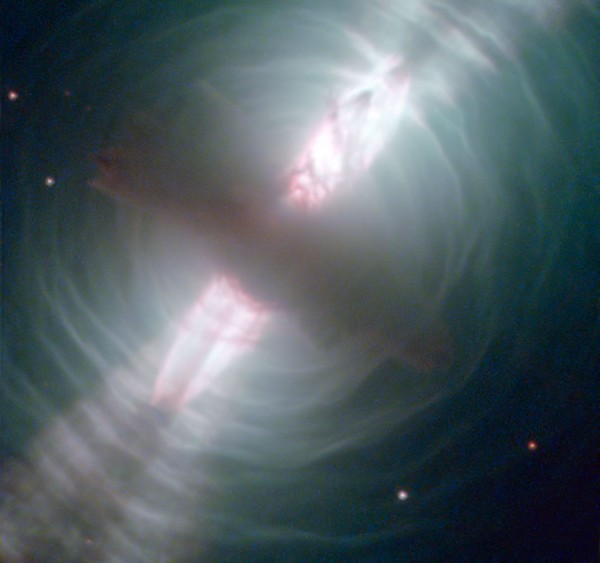 The two twin beacons shining out look like four floodlights in the fog, and for good reason: these are four weak spots in an extremely dusty region of space that allow the starlight to escape! The region is so obscured that we don't even know whether there's one giant star on its own, or whether it has a binary companion in there with it. Have a look at the full-scale image of the Egg Nebula, some 3,000 light years away.

But don't forget that Hubble's an amazing thing. Even though there aren't many preplanetary nebulae, you might wonder if we've ever caught one where we've had the good fortune to look down perpendicular to the dusty disk, instead of at some unfortunate angle. Well, have I unearthed a find for you. Say hello to IRAS 23166+1655 around the star LL Pegasi, and its magnificent, dusty spiral. 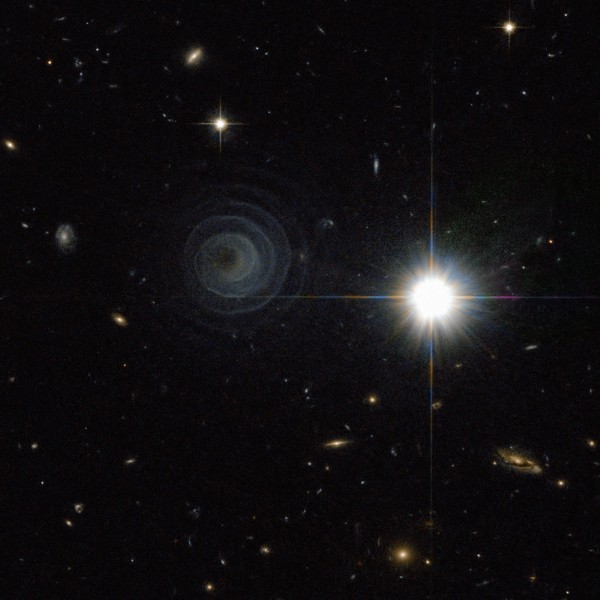 Take a closer look in there; that's not a series of concentric spheres/circles, those are really spirals! 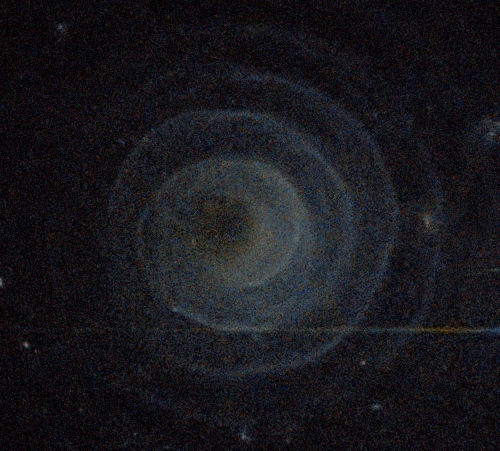 With an 800-year period estimated for this binary system, you can literally count the age of the preplanetary nebula by counting the rings in the spiral structure! In a few thousand years, all of this dusty structure will be gone, and all we'll be left with is a plain, ionized planetary nebula, with a white dwarf at the center. But for right now, you're looking at the last living stages of what was once a Sun-like star, ending its Red Giant phase and becoming a planetary nebula.

Welcome to your Universe, where it provides you with snapshots of the transition in action!

"What will the death of our Sun be like?"

I don't know but two things are clear.

Humans are causing the Sun to use its fuel at an accelerated rate.

Because of this, there should be a Sunshine tax.

Then, the world will be safe again.

As usual, a wonderful post. I am always happy when I click the link at RCS to see the Wolverine avatar--I know it will be a good one.

One slight cavil though. I am fairly sure you meant to say "a star the size of ours" and not "a star our size."

When morons lose an argument, they resort to strawmans. Well done.

Wow, Lotharloo. While Don's comment was quite funny, you resort to name calling and can't even get the plural strawmen correct? Think you've identified the wrong person here as the loser.

@janvones the correct term is straw women! let's be inclusive!

No, the feminine of straw man is inflatable woman, lol.

But yes, a great article, and I wish Ethan were doing the remake of Cosmos, rather than that gasbag, whatsisname.

Didn't some old star catalog, perhaps the Almagest, list Sirius as a red star? I've heard a number of theories about this including one that at some point in historical times Sirius was actually red. That's probably bogus, but food for thought. Maybe we've already caught such a transition?

I just began my astronomy unit for my 8th graders, bravo on the timing of your post. Students have so many questions about our sun, and here you put a bunch of answers in something they love to read...a blog! Even if it is a science blog.

It's like a dead person, that bloats, when it isn't kept cool/fresh ... Solid organic materials decompose into gasses such as hydrogen sulphide, carbon dioxide, and methane; and the volume of the body starts to blow up. As the pressure of the gases within the body increases, fluids are forced to escape from natural orifices, in the back and the front, see what I mean >:o)

Nope, it was just another libertarian diatribe about taxes because this denier thought this would be about fossil fuels and wanted, REALLY wanted, to get their screed about how The Free Market Will Ensure Fuel And Prosperity For All; and, when this wasn't possible, gave out the knee-jerk jerk that all libertarians HAVE to do when they have nothing else to say.

So, no, it wasn't funny at all. It was tired, stale, and a pointless waste of electrons.

But you had to defend a fellow.

Perhaps then you would like to explain the recent studies which attribute the bulk of global temperature increase to an increase in solar radiation, an external source, rather than simple bipeds burning the carbon that was already here?
Perhaps you would like to address the recent findings that seem to confirm the abiotic oil theory?
You can use google for this homework.

If either theory proves true, the absolute only thing we have to lose is billions of spending on green power sources with less efficiency than fossil fuels we already have.
And let's face it, if enviros really wanted green energy, they'd be ceaselessly advocating the only proven, safe, and affordable source of green energy which we've already been utilizing for decades...nuclear power.

Not sure if I'd call myself a Libertarian (Ron Paul's crazyness has permanently tarnished that label), but I am a Realitytarian.

They have it wrong. Sun has been reducing output and the temperature trend is upward whilst the sun's output is down.

You may be considering the studies from a while ago that agree with the IPCC that most of the pre-1950's warming was from the sun, but that leaves most of the warming since pre-industrial climate means mostly post 1970 being due to human activities.

Maybe you could use Google to do your homework: