US CO2 Output Up, and how to lie with graphs

Above is a graphic someone tossed at me on twitter the other day. It makes it look like CO2 emissions went way up then went way down so everything is fine. It is, of course, a lie, of sorts.

IT is actually kind of hard to find a graph just for US CO2 that goes back in historic time, but this graphic for the global energy industry clearly shows that the big picture is an upward trend: 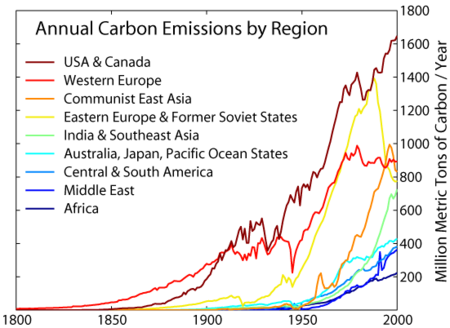 The dip we see in recent years is simply an effect of the economy going bad, and things people do that emit CO2 being done somewhat less. Kevin Schultz wrote this up on his blog:

After a five-year decrease in the amount of carbon dioxide pumped into the atmosphere from burning fossil fuels, U.S. greenhouse gas emissions are on the rise again. The culprit: a rebounding economy.

CO2 emissions from fossil fuels rose 2.39 percent in 2013 compared with 2012 and grew 7.45 percent for the first two months of 2014 compared with the same period in 2013, according to new data released by the U.S. Energy Information Administration (EIA). The jump puts an end to the annual decrease that had occurred from 2008 through 2012.

So be careful of that misleading graph, and keep working on reducing emission. This problem will not solve itself.

Some of the reduction in CO2 emissions is also due to the fracking boom as energy production changes from coal to gas. Gas power stations emit less CO2 per unit of energy than coal power stations.

However, in reality gas power is not much better (or even worse) for climate than coal if you include the effects of methane (CH4), which is leaked from pipelines etc. Gas power only seems good for climate if you only consider CO2. Methane has a much greater global warming potential - essentially each molecule of CH4 contributes as much warming as 70 molecules of CO2.

If you take this into account, gas power is only better if the total gas leakage is less than about 4%; if the leakage is higher, then the leaked CH4 affects the climate more than the saved CO2.

How much gas leakage is there? This is difficult to measure, but estimates are a few percent, and it also seems that the leakage from fracking operations is considerably higher than it was assumed (see Caulton et al, PNAS 2014, http://dx.doi.org/10.1073/pnas.1316546111).

So we may have reduced CO2, but we have increased CH4. In terms of total greenhouse gas emissions, we haven't really reduced emissions (certainly not as much as the CO2 curve might suggest) or may even have increased total emissions.

It would be good if you had your second graph up to more recent years.

On the one hand we haven't succeeded in breaking the link between economic growth and emissions growth. There's an additional factor that has to be considered and that we in the developed world are all too eager to ignore. The emissions figures account for production, not consumption, so when we outsource production to countries with lower production costs and then import the products that are made, we appear to responsibly lower our own emissions while the less responsible developing countries are increasing theirs. A good deal has been written about this. Here are two examples from the scientific literature and one from the mainstream press:

“We find that in 2006, 36% of anthropogenic sulfur dioxide, 27% of nitrogen oxides, 22% of carbon monoxide, and 17% of black carbon emitted in China were associated with production of goods for export. For each of these pollutants, about 21% of export-related Chinese emissions were attributed to China-to-US export.”
China’s international trade and air pollution in the United States
http://www.pnas.org/content/early/2014/01/16/1312860111

“Cuts in carbon emissions by developed countries since 1990 have been cancelled out many times over by increases in imported goods from developing countries such as China, according to the most comprehensive global figures ever compiled.
…emissions released during production of goods are assigned to the country where production takes place, rather than where goods are consumed.
Campaigners say this allows rich countries unfairly to claim they are reducing or stabilising their emissions when they may be simply sending them offshore – relying increasingly on goods imported from emerging economies that do not have binding emissions targets under Kyoto.
According to standard data, developed countries can claim to have reduced their collective emissions by almost 2% between 1990 and 2008. But once the carbon cost of imports have been added to each country, and exports subtracted – the true change has been an increase of 7%. If Russia and Ukraine – which cut their CO2 emissions rapidly in the 1990s due to economic collapse – are excluded, the rise is 12%...
Much of the increase in emissions in the developed world is due to the US, which promised a 7% cut under Kyoto but then did not to ratify the protocol. Emissions within its borders increased by 17% between 1990 and 2008 – and by 25% when imports and exports are factored in.”

See also:
U.S. Trade Deals From the 90’s Set Up China as a Pollution Haven
http://insideclimatenews.org/news/20140306/us-trade-deals-90s-set-china…

If rising production costs in developing countries result in transferring production back to developed countries, that too will affect emissions statistics.

You can find updated graphs in the draft of the IPPC WGIII Report, which is due to be published later this year, but the draft is already available: http://mitigation2014.org/report/final-draft

Relevant is also Fig. 5.2. which shows the greenhouse gas emissions (i.e. including CH4, N2O etc.) in CO2-equivalent. Unfortunately it doesn't show individual regions but lumps all OECD-90 countries in one graph. Fig 5.14 is similar but shows territory-based and consumption-based emissions separately (i.e. wheter the indirect emissions of stuff consumed in Europe but produced in China is counted for Europe or China).

Fig 14.3. in Chapter 14 shows the changes of GHGs for different regions 1990-2010. No reduction in any region except EIT (Economies in Transition, i.e. Eastern Europe and former Soviet Union).

Much of the U.S. reduction strategy has been based on replacing coal with natural gas, and the widely accepted assumption has been that the reserves made available by fracking justified this. A number of critics have argued that the industry reserve estimates are exaggerated and that steep decline rates, the constant need for new wells, and the peaking of sweet spots meant that the fracking revolution was better seen as a short-lived Ponzi scheme. Now, the world's most influential energy organization, the IEA, seems to have approached that point of view. In its recent report, WORLD ENERGY INVESTMENT OUTLOOK, it has drastically lowered its evaluation of U.S. energy potential and writes that it expects shale investment and then production to fall from the mid 2020s (pp 59-60). Others expect the fall to occur earlier. In either case, this is not the basis for a mid to long-term emissions reducing energy strategy. The implications of this deserve some serious thought and a very quick response. A massive expansion of gas infrastructure would be a disaster.

(This is not to ignore the other problems related to fracking – methane leaks, air and water pollution, health effects.)

Page 5 has the numbers above as a total of 4 different types of greenhouse gases. http://www.epa.gov/gasstar/documents/workshops/2014_AIW/Overview_GHG_In…

Nice lack of scale for the vertical axis,; obviously way above 0.

Thanks for the suggestions on the graphs. Just for the record, there isn't a graph easily grabbable that I have seen that shows pre-industrial through the present, takes us up to the current year, and is for the US.