Sins of Our Fathers by Shawn Otto

JW, protagonist, is a flawed hero. He is not exactly an anti-hero because he is not a bad guy, though one does become annoyed at where he places his values. As his character unfolds in the first several chapters of Shawn Otto's novel, Sins of Our Fathers, we like him, we are worried about him, we wonder what he is thinking, we sit on the edge of our proverbial seats as he takes risk after risk and we are sitting thusly because we learn that he does not have a rational concept of risk. We learn that his inner confusion about life arises from two main sources: the dramatic difference between his temperament and upbringing on one hand and the life he ended up with on the other, and from unthinkable tragedy he has suffered. And so it goes as well with the other hero of the book, Johnny Eagle, who is a flawed, almost Byronic antagonist. Flawed because he is not the bad guy yet is an antagonist, Byronic because of his pride. There is also a troubled young man, a full blown antagonist we never come close to liking, and a horse. 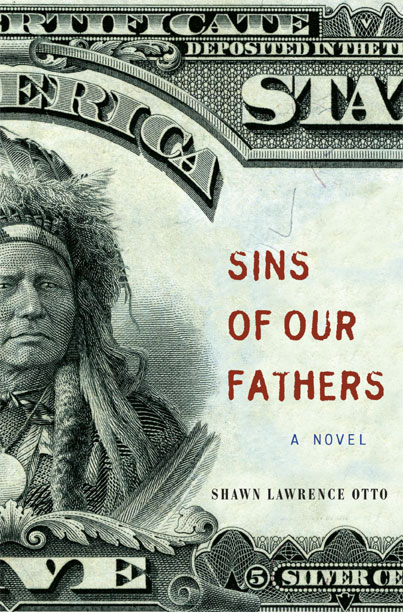 When I moved to Minnesota from the East, I quickly encountered "The Indian Problem." Not my words; that is what people called it. Very rarely major news, but still always a problem, the concept includes the expected litany. Poverty, fights over spear fishing rights, casinos and fights over off-reservation gambling, and the usual racism. I lived near the "Urban Res" but was told never to call it that. Doing some historic archaeology in Minneapolis I came across a hostess, of the first hotel built in the city, who had written elaborate stories of Indian attacks in South Minneapolis, part of the Indian Problem, after which she and her hotel gave refuge to the victims. None of which ever actually happened. I read about trophy hunting by the farmers in the southern part of the state, who took body parts from the Native Americans executed as part of the Sioux Uprising, and heard rumors that some of those parts were still in shoe boxes in some people's closets.

Later I married into a family with a cabin up north. I remember passing Lake Hole-In-The-Day on the way up to the cabin, and wondering what that meant -- was a "Hole in the day" like a nap, or break, one takes on a hot lazy afternoon? And the cabin was an hour or so drive past that lake. Many months later, I did some research and discovered two amazing facts. First, Hole-In-The-Day was the name of two major Ojibway Chiefs, father and son, both of whom were major players in the pre-state and early-state histories of the region, of stature and importance equalling or exceeding any of the white guys, like Snelling, Cass, Ramsey, after which counties, cities, roads, and other things had been named. But no one seemed to know Hole-In-The-Day. It was just a lake with a funny sounding name like most of the other lakes. The other thing I learned was downright shocking: The cabin to which we have driven many summer weekends is actually on an Indian reservation, as is the nearby town with the grocery store, ice cream shop, and Internet. On the reservation, yes, but not near any actual Indians. So, I could tell you that I spend many weeks every summer on an Indian Reservation up north, and it would not be a lie. Except the part about it being a lie.

Otto's book pits the white, established and powerful, Twin Cities based banking industry against an incipient Native bank and the rest of the reservation. The story is a page turner, but I don't want to say how so, because I don't want to spoil any of it for you. I am not a page-turner kind of guy. I am a professional writer, so therefore I'm a professional reader. I can put a book down at any point no matter what is happening in order to shift gears to some other task awaiting my attention. But I certainly turned the pages in Sins of Our Fathers. The most positive comment one can make about a piece of writing is probably "this made me want more." That happens at the end of every chapter in Otto's novel.

But just as important as Sins of Our Fathers being a very very good book, which it is, it also addresses the Indian Problem. It does not matter if you are in, of, or familiar with Minnesota. The theme is American, and I use that word in reference to geography and not nationality, through and through. Everybody has an Indian Problem, especially Indians. Tension, distrust, solace and inspiration in modernized tradition, internal and external, are real life themes and Otto addresses them fairly, clearly, and engagingly. "Fathers" is plural for a reason, a reason you can guess.

It is important that you know that Sins of our Fathers is not Minnesota Genre though it is set here; it is not Native American Relations and Culture Genre though that is in the book. It is action, mystery, adventure, white knuckle, engaging, well-paced, and extremely well written. There are aspects of this writing that recommend this book as an exemplar in plot development, character construction, dialog and inner dialog, narrative distance, and descriptive technique.

Sins of Our Fathers is Shawn Otto's first novel (but not his first book); it is due out in November but available for pre-order.

Shawn Otto is the founder of Science Debate. He is a science communicator and advocate. He is also a film maker, and among other things wrote the screenplay for the award winning movie "House of Sand and Fog."

Sins of Our Fathers, a New Novel by Shawn Otto

Sins of Our Fathers, by Shaw Otto, is coming out shortly but can be preordered. JW, protagonist, is a flawed hero. He is not exactly an anti-hero because he is not a bad guy, though one does become annoyed at where he places his values. As his character unfolds in the first several chapters of…

Here in Minnesota, and in surrounding states, there is some real tension between Native and Immigrant communities. The poorest, most drug-ridden, down trodden and repressed communities here are often Native, and conveniently these communities tend to be (but not always are) located far away from…

Science is always nonpartisan, but it is always political: Fool Me Twice

Fool Me Twice Fool Me Twice: Fighting the Assault on Science in America" was officially released last night in Minneapolis with appropriate fanfare and celebration. Everyone who gets to know Shawn likes him from the start and quickly learns to respect him and eventually hold him with a certain…

Interview by Jimmy James Bettencourt It was dark and the streets were wet as I pulled out of the ER where I had seen enough carnage for the night and found the highway heading straight into town. Right away there was a sense of trouble and randomness in the air as police cars careened desperately…
Advertisment