"[T]he entire globe will soon be wrapped in a glowing envelope through which none of the magic of the Universe can be seen by the naked eye." -George Eslinger

Welcome to still another Messier Monday here on Starts With A Bang! Each Monday, we highlight a different one of the 110 deep-sky objects that make up the Messier Catalogue, the first accurate catalogue of more than 100 extended, deep-sky wonders strewn across the expansive night sky! 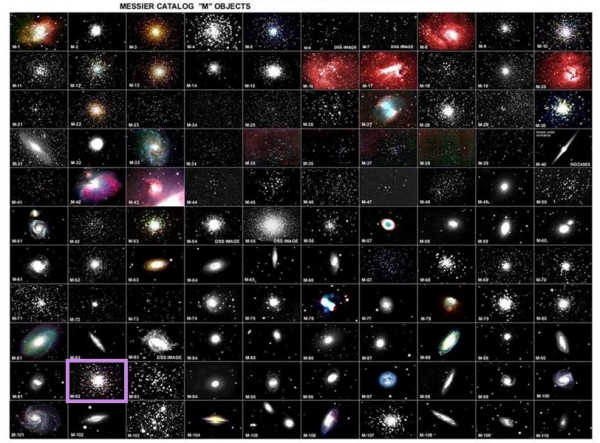 Tonight, the Moon is nearly full, which means the largest natural source of light pollution at night will be affecting you, regardless of where you are. But that doesn't mean you can't still enjoy the wonders of the night sky; it means that rather than distant galaxies, planetary nebulae and star-forming regions, you should set your sights on the clusters: open star clusters and globular clusters! And for today's entry, I've got quite a treat for you: an oft-forgotten globular cluster that's almost as old as the entire Universe itself, Messier 92! 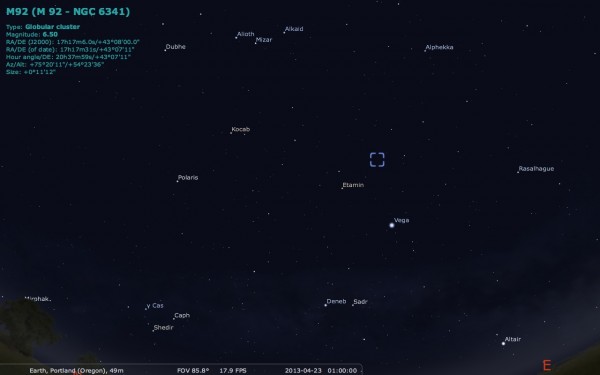 You'll want to wait until a little later at night to hunt this one; it's easiest when you can see both the Big Dipper (at the top of the image above) and also the Summer Triangle: the asterism outlined by the three bright stars Vega, Deneb and Altair. If you draw an imaginary line from Alkaid -- the last star on the Dipper's handle -- to Vega, you'll run into the magnitude-2 star Etamin, the brightest star in between the two.

If you can find Etamin in either a pair of binoculars or a low-power telescope, then star-hopping to Messier 92 is easy. 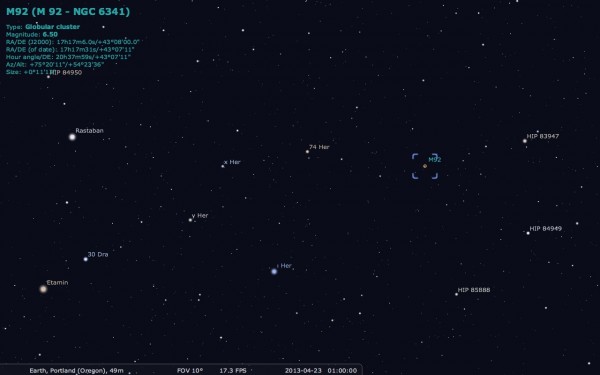 Located about six degrees away from Etamin is M92, one of only two Messier objects located in the constellation of Hercules. Although the other one is far more famous, Messier 92 is a sight to behold in its own right, and holds some secrets within it that its discoverer -- Johann Elert Bode in 1777 -- could scarcely imagine. 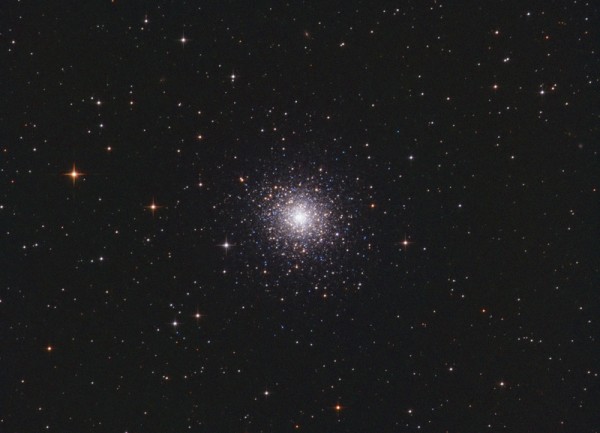 As with all Messier's globular clusters, it's located many thousands of light years away (26,000 in this case), is fairly concentrated at just 109 light-years in diameter, and contains hundreds of thousands of times the mass of the Sun (an estimated 330,000).

But while most globular clusters are old, this one's really old! 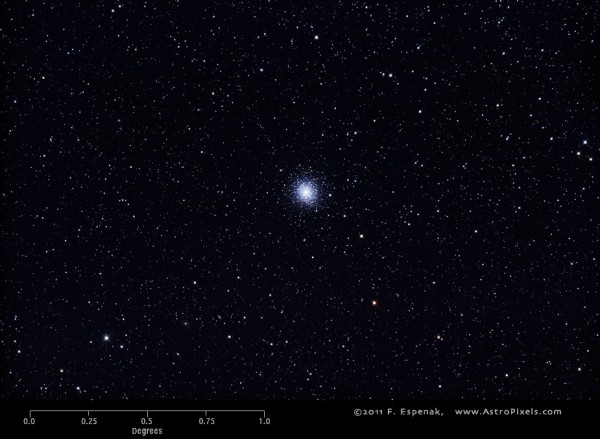 All stars on the main sequence work by fusing hydrogen into helium. With the exception of stars (mostly near the core) that have merged recently to become blue stragglers, only stars with a lifetime longer than 12-to-14 billion years are still around in this cluster! 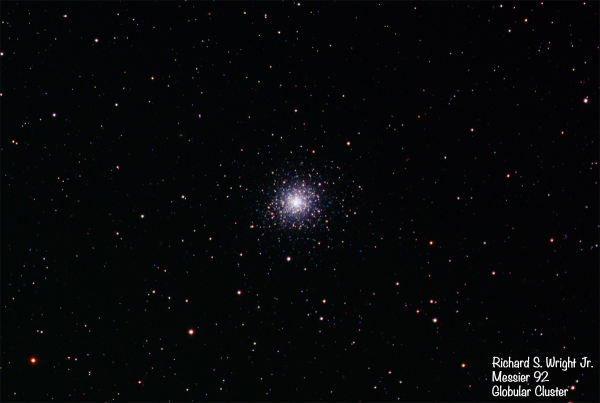 What's more than that, is because we can measure individual stars in this globular, we can determine the abundance of metals, or elements heavier than hydrogen and helium. We can compare that abundance with the amount of heavier elements found in our Sun, and you know what we find?

The stars in Messier 92 have just 0.5% the heavy elements that the Sun has! 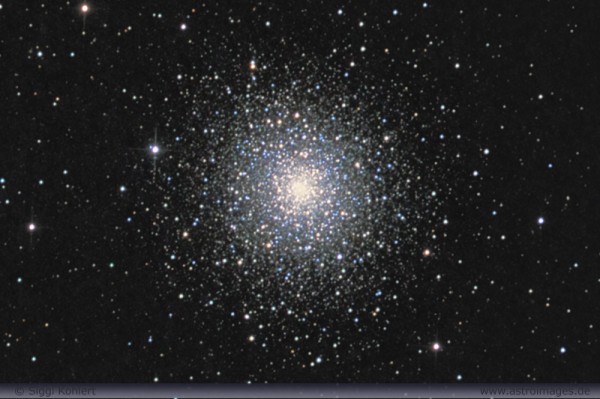 Because the amount of metals present in a star is directly related to the number and type of stars that lived before these were formed, the Sun -- formed some 9.2 billion years after the Big Bang -- is going have far more of these heavy metals than stars that were formed less than 1 billion years after the Big Bang. This makes M92 the oldest known globular cluster in the Milky Way, although the uncertainties mean that this only very likely; not a certainty.

And that's what we're seeing when we gaze out at this amazing, ancient relic that's orbiting our own Milky Way! 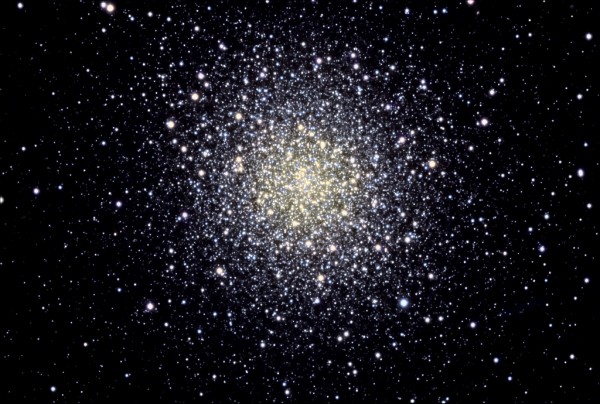 Coming towards us at a rapid 112 km/sec, this ancient globular cluster will be a spectacular sight practically every night during the spring and summer in the Northern Hemisphere!

Want to know some fun, interesting trivia about M92? 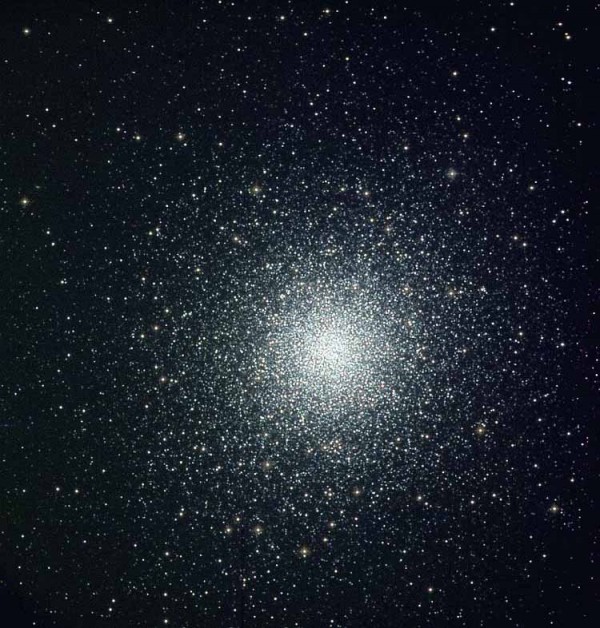 In about 14,000 years (in the year 16,000), this globular cluster will be the object that the North Pole of the Earth points directly towards! Every 26,000 years, the Earth completes one precession of its axis. So the North Star is Polaris today, but most of the time, we don't get a pole star. Back in 10,000 B.C.[E.], at the end of the last Ice Age, we had a pole cluster, and we'll get one again far into the future!

As always, the most spectacular image of Messier 92 comes from the Hubble Space Telescope. 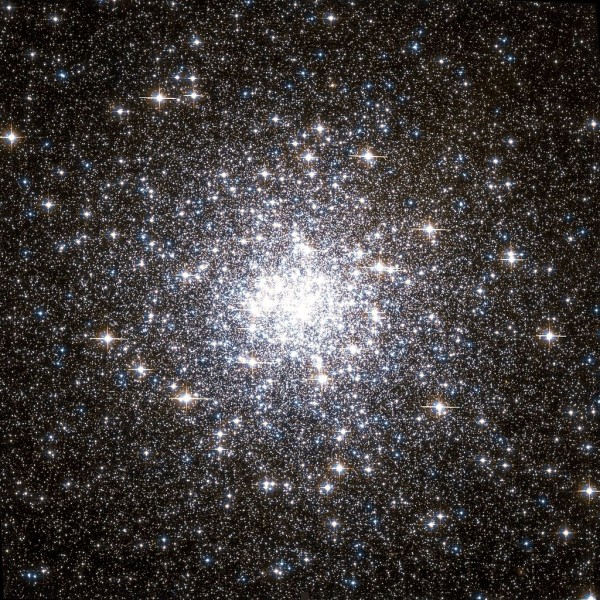 This wide-field shot is about 3.5 arc-minutes across, and was taken with the Advanced Camera for Surveys instrument aboard Hubble. If we take a strip that runs through the center of this cluster, we can appreciate just how much more dense the stars in the center are than they are at the cluster's outskirts.

But why stop there? Because -- believe it or not -- that was the second time the Hubble Space Telescope imaged this Messier object; the first time was with a different camera: the older (but higher-resolution) WFPC2! 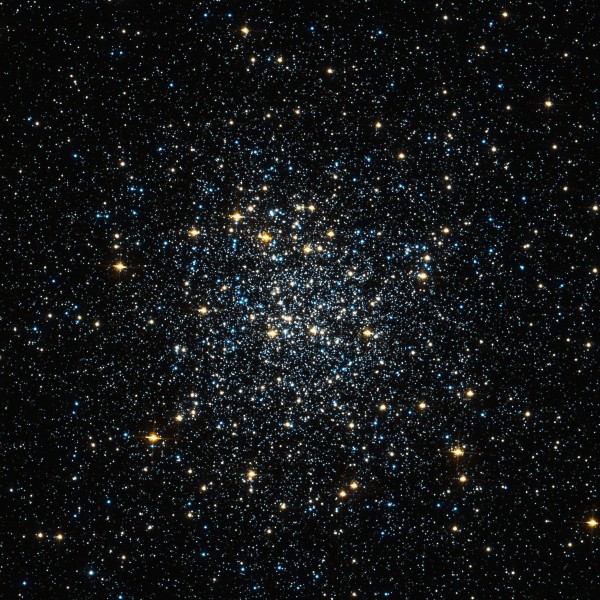 This image is just 1.4 arc-minutes across, and allows you to really focus in, narrowly, on the stars in the center of this cluster. Look at the wild color difference that WFPC2 captures if we take the central strip! Note, in particular, the bright orange/yellow stars; these are giants and subgiants nearing the end of their life cycles!

For a little more about the history of observing Messier 92, check out Universe Today's piece on it.

And that's all for another Messier Monday! Including today, we’ve taken a look at the following Messier objects:

Come back next week, where we’ll take a detailed look at another one of Messier’s 110 deep-sky objects, only here on Starts With A Bang’s Messier Monday!

This series is so well done and so fascinating! Thank you!

Nice post,I read it and start to ask how big is the universe.
Messier 92 is amazing,the most beautifull pic that I ever see with stars.
I also like Leonids : most spectacular images of “falling stars” is seem to be amazing what nature can do.

Thanks for the post,best wishes