California is clearly exceptional, but not in a good way: #Drought

The US Drought Monitor produces an assessment of drought conditions every week. The drought in California has taken a large jump over the last few days, with the highest category, "Exceptional," jumping from 36.49% to 58.41%. At the start of the calendar year, that category was represented in California by 0%, so this is a continuation of an ongoing trend. The image above is the current map from US Drought Monitor.

I made a couple of other graphics that demonstrate the problem.

This is the percent area in California covered by severe to exceptional drought since the most recent time that this percentage was at zero, near the end of 2011.

And these two graphs show just the percentage of land area in California covered by Exceptional drought since the beginning of the US Drought Monitor's data in 2000 to the present (upper graph) and the same information for the last year (lower graph). 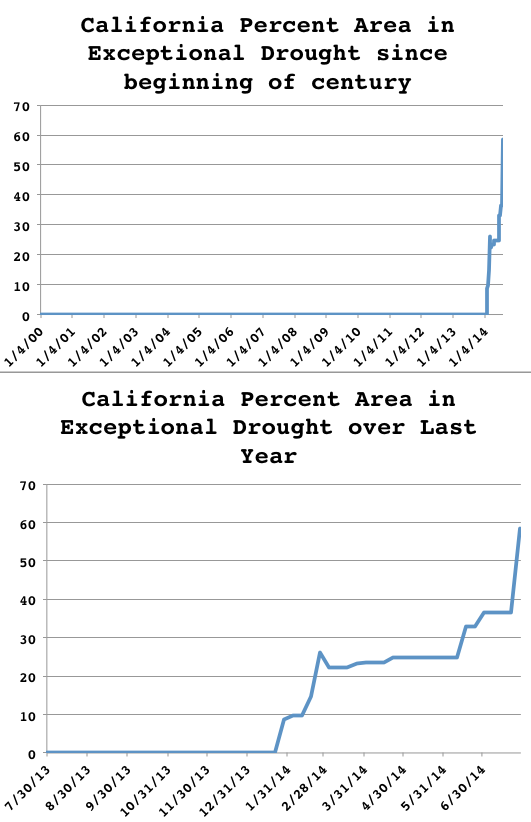 The drought monitor has a synopsis of the situation:

Increasingly, drought indicators point to the fact that conditions are not appreciably better in northern California than in central and southern sections of the state. In addition, mounting evidence from reservoir levels, river gauges, ground water observations, and socio-economic impacts warrant a further expansion of exceptional drought (D4) into northern California. For California’s 154 intrastate reservoirs, storage at the end of June stood at 60% of the historical average. Although this is not a record for this time of year—the standard remains 41% of average on June 30, 1977—storage has fallen to 17.3 million acre-feet. As a result, California is short more than one year’s worth of reservoir water, or 11.6 million acre-feet, for this time of year. The historical average warm-season drawdown of California’s 154 reservoirs totals 8.2 million acre-feet, but usage during the first 2 years of the drought, in 2012 and 2013, averaged 11.5 million acre-feet.

Given the 3-year duration of the drought, California’s topsoil moisture (80% very short to short) and subsoil moisture (85%) reserves are nearly depleted. The state’s rangeland and pastures were rated 70% very poor to poor on July 27. USDA reported that “range and non-irrigated pasture conditions continued to deteriorate” and that “supplemental feeding of hay and nutrients continued as range quality declined.” In recent days, new wildfires have collectively charred several thousand acres of vegetation in northern and central California. The destructive Sand fire, north of Plymouth, California—now largely contained—burned more than 4,000 acres and consumed 66 structures, including 19 residences.

Yet the lawn watering restrictions in Ca are not as intense as the ones in Tx at a maximum once per week with a sprinker in Tx down to the worst hit areas with no landscape watering period. (these are in towns that have less than 6 months supply of water in their reserviors). Until Ca adopts Tx style restrictions and returns the freeway side median plantings to dirt they are not serious about the drought.

for years, we have been telling the city planning department and the country board of supervisors that we needed to stop.... nothing.
"City Planning in Zero Water Environments" (Morales, G.T. SSA/SSSA Annual Conference – Las Vegas, March 2008)

Gregory, stop being a mean jerk!

Here is the solution to Global Drought and Global sea level rise!!

We also need to consider the graphic of water usage and how the population of California has grown since the last big drought in the 70s.