Atlantic Hurricane Gonzalo is a Major Hurricane, Category 3 at the moment, and it is heading towards Bermuda. The storm will weaken a little bit before getting there but it will still be major. This is a significant event. It is possible that a storm surge of about 10 feet could occur there. Gonzales will be very near Bermuda in by Friday Evening, and past it by Saturday morning.

Interestingly, Gonzalo is expected to remain a hurricane strength storm (though it may be called a "post-tropical cyclone" it will still have sustained winds at hurricane level) as it passes the Canadian Maritimes. It will be interesting to see how much of its hurricane shape it maintains as this happens. Gonzalo will still be a pretty nasty storm when, in several days it arrives in the general vicinity if Ireland and Great Britain. 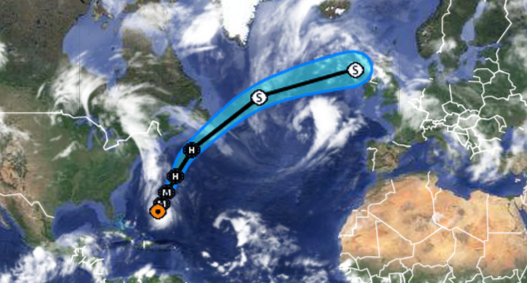 Although it appears that a gradual weakening has begun, Gonzalo is
expected to be a dangerous Category 3 hurricane as it
moves near or over Bermuda later today. After that time, increasing
shear and cooler waters along the track of the hurricane should
result in a faster weakening. Gonzalo is likely to transition
into a post-tropical cyclone by 36 to 48 hours as it moves near or
south of Newfoundland, and become fully extratropical thereafter.

Significant coastal flooding on Bermuda is likely if Gonzalo
continues on the current NHC forecast track. Although specific
amounts cannot be forecast for Gonzalo, Hurricane Fabian produced an
estimated 10 feet of storm surge when it moved over Bermuda as a
major hurricane in 2003, and similar values could occur with
Gonzalo.

I am due to fly from Bristol England at 7.30am. How likely is it that my flight might be affected by this hurricane?

I am due to fly from Bristol England at 7.30am. How likely is it that my flight might be affected by this hurricane? That is 7.30 am on Tuesday 21st.

I have no idea. They can fly around these things. Might depend on where you are flying too. If Bermuda, then you'd better check your flight!

Thanks Greg. Nop not going anywhere near Bermuda thank God. I am flying to Palma Mallorca hopefully.