Did the Patriots Deflate Their Balls Or Not?

This year's Super Bowl will be, as of this writing, tomorrow, late afternoon, between the New England Patriots and the Seattle Seahawks. Both teams have a 14-4 record for the season, so it should be a good game. Also, the game will be held in a stadium located in an arid and warm region of the country, in a stadium with a covered roof. So, there is no chance of a cloudy with a chance of deflated-balls scenario.

You have probably heard that an accusation has been made against the New England Patriots regarding their balls. It has been claimed that they intentionally deflated their balls during certain, perhaps many, games, in order that players be able to hold on to said balls during play. There is some evidence that this is true. In particular, the New England Patriots seem to have an exceptionally good record playing with balls that are wet and/or chilly -- exceeding betting spreads which are, essentially, complex and generally accurate models -- 80% of the time.

But now, a New England based scientist who has disclosed, as is proper, his fanship of the New England Patriots, has released a study suggesting that the Patriot's balls may have deflated naturally, after they were moved from a warm environment to the colder environment of the playing field.

Thomas Healy, former college punter and founder of HeadSmart Labs, a sports safety think tank, has carried out experiments to test this hypothesis. Here is the scientist, Healy, pointing to the relevant calculations: 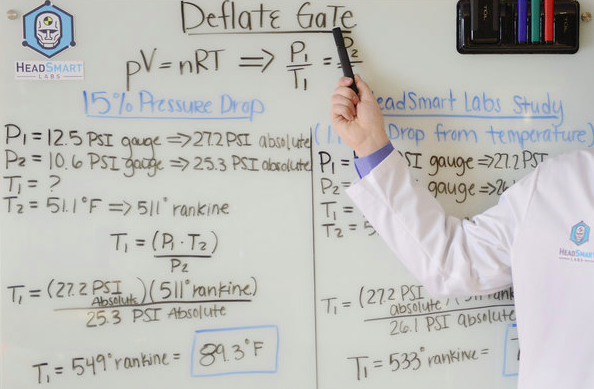 And here is Healy explaining his research on the behavior of foot balls:

No Emerging Consensus on Deflate Gate

The thing I found most interesting about ball-gate, which is discussed in a New York Times piece on Healy's research, is that several physicists had goofed up their application of the famous "Inert Gas Law" in making public assertions that the New England Patriots must have ensmallened their balls during the game in question. According to the New York Times, "Other evidence is also turning the Patriots’ way. In a usually obscure profession that has received extraordinary attention during the controversy, some academic and research physicists now concede that they made a crucial error in their initial calculations, using an equation called the ideal gas law. When that error is corrected, the amount of deflation predicted in moving from room temperature to a 50-degree field is roughly doubled."

Timothy Gay, who wrote "The Physics of Football," which included a forward by Patriot's Coach Bill Belichick, also chimed in. He notes that deflated balls would certainly provide an advantage, but he agrees with Healy's results, and has confirmed them with his own calculations.

Bill Nye has also entered the fray, but he disagrees with Healy. Nye is backed up by a major web site known as "Funny or Die." From a piece in Salon,

“Funny or Die” and Nye actually demonstrate[s] what would happen if balls went from 80 degrees Fahrenheit to 51 degrees Fahrenheit for such a short amount of time. Most importantly, Nye reminds us that man-made climate change is real. And unlike “deflate-gate” it is, as Nye says, “something about which you should give a fuck.”

Who will win the Deflate Gate Debate?

So, who are you going to go with? An industry funded scientist and Patriots fan with a fancy thermometer, or an independent science communicator with a better video who is a Seahawks fan? Are you going to accept the experimental evidence (and remember, we have two experiments, one formal and one informal, showing opposite results) or the paleo-data (the New England Patriot's record playing with damp and chilly balls)?

I'm thinking the jury is still out. But Bill Nye is certainly right about one thing. Climate change is real, and something to truly give a fuck about.

When is the Super Bowl on?

Sunday, February 1st, at 5:30 Central Time. It should be a good game, but don't get your hopes up. You wouldn't want to be deflated.

Another factor: from 2000-2006, the Pats are league-average in lost fumbles. In 2007 (the year that road teams began providing their own footballs) they suddenly jumped to leading the league by a ridiculous margin (far enough that iirc the 2nd best team is closer to the last place team than to the Pats). Not explicable by seeking out players with good hands (Pats players didn't have these great hands on earlier teams) or training techniques (players who left for other teams didn't carry this quality with them).

Simple solution to this going forward - NFL supplies the balls under the supervision of the game officials, teams not allowed access to them except in play on the field

Doug: Also, both teams should be sprayed down with WD-40 before each game.

Healy didn't report the humidity of the 50 deg room nor the actual final temperature of the wet footballs. Presumably, if it is raining then the wetbulb depression would not be a factor (humidity ~100 percent). I'll bet that the demo room was relatively bone dry thus the balls would be cooler (10 deg?) and go a little flatter.

It is neat that he notes the expansion of wet hide and I'll just go ahead and *assume* that the inner bladder is able to expand a little -- Otherwise, they would only change shape and not increase their volume.

If I needed to cheat that way and were under the watchful eye of an 'impartial' observer then I'd probably have a battery inside the pump plunger housing actuating a fast-acting kanthal wire heating coil such as with the electronic 'e-cig' vaporizers so that the initial T is much higher for a given guage pressure.

Anecdotally, New York Giants running back Barber was fumble-prone until he worked with Head Coach Coughlin. He became very productive for the team. According to the two, there are ways to control what they can control and minimize the risks of fumbling: something like one-armed cradling higher up in the torso near the shoulder.

Head Coach Belichick employs two different methods: make the footballs difficult to control during practice so that strategies to control the footballs are drilled into the carriers, and bench the fumbling carrier until he demonstrates during difficult practices he is able to not fumble. Belichick was able to do the latter by carrying more running backs on his teams.

Citing an outlier statistic to support an argument can be misleading.

With NE losing two draft picks for deflate gate does this mean that two kids won't get drafted - one in first round 2016 and one in the fourth round 2017?

I assume/guess that the NFL's intention here is to make sure the Patriots are out of the running for the Super Bowl. In this way they are being punished for taking a SB win that they did not deserve. I would think a better way to do that would be to handicap them some other way. Have them sit out three games and call them all losses, for example, so they could not be in the playoffs, or something along those lines.

I think football has real trouble with concussions and long term brain injuries, and can't afford any hint of cheating, too. I think Belichick set the tone for stretching the rules, but Brady was a lot closer to the balls.

Well, he used the balls but he would not have been the person inflating them.

No, but he had a text trail to the person *deflating* them.

"b) likely lots of others know about it."

They have video of a staffer taking a bag of balls from the locker room to the field, and making a 90+ second stop in a bathroom along the way. That bag is the one that had the deflated balls.
Speculation is that person will be fired - if it has not already happened. Since he is unlikely to have done the dirty work on his own: not good.

Does anyone consider Bill Nye to be remotely scientific in his video? How can he be given any credibility after that?

The wind was peaking around gametime.

I don't know the actual time of 'halftime' but if it was between hours 21 and 22 the wind had subsided.

I'd propose that the relatively high velocity winds flowing past the entrances of the bowl-like stadium lowered the interior pressure below static atmospheric. -- Like a shower curtain drawn towards the spray, the vacuum of a carberator venturi, or the popping of one's ears when cracking a car window.

The combination of (a.) temperature and (b.) Bernoulli can lead to flaccid footballs??

Perhaps, they even closed off the most windward entrances?

If the stadium were treated as a fat airfoil, then...