The big loser in this debate was CNBC. The network chose to not let anyone who was not a subscriber see the debate live. Then, apparently, the moderators trivialized the debate and annoyed the debaters, who then attacked CNBC and the press in general. Then, today, when we look at the news stories about the debate, there are hardly any. Nobody seems to really care what happened last night.

Another loser was Ben Carson. I've come to think of the online unofficial polls as useful to indicate overall opinions, and to show how those opinions change (we can discuss another time why this is a valid consideration). If you look at a selection of online polls, which I've informally posted below, Carson is not winning, or even second. Other indicators had suggested Carson had surpassed Trump, or caught up. If these informal online polls continue to do a reasonable job of indicating overall opinions (as they have for several weeks now vis-a-vis presidential debates) then it appears that Carson's rise over the last few weeks was a flash in the pan. This could be explained by the very strong social media push back against him as more has been learned about his background and strange thoughts.

People have been watching Carly Fiorina and Jeb Bush because, for various reasons, they could have taken off in this primary process. They didn't. They lose too.

Who are the big winners? Ted Cruz and Marco Rubio had impressively large numbers in these informal polls, and given the brief snippets I've seen of them in the debate, they presented well (not that I agree with them on anything).

The real winner of course, is Donald Trump who trumped the others in these polls, and did so by continuing unwaveringly with his strategy. Every day that goes by we are more assured that Trump will be the heir apparent for this nomination entering the first primaries and caucuses. 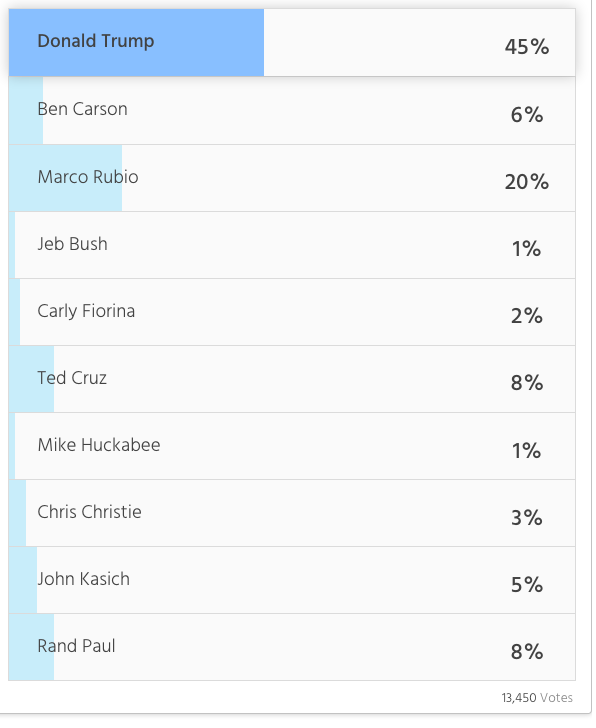 Based on the little I saw, I'd say the loser was American debate culture and American democracy.

Re. Rubio, Ryan Lizza points out that Kid Klepto has some problems:

"But Rubio must know that the issue of his finances isn’t going away. The Miami Herald has reported that Rubio “amended his financial disclosure forms … after The Miami Herald asked why they lacked a $135,000 home equity loan he obtained from a bank controlled by his political supporters.” The Tampa Bay Times has reported that Rubio “double-billed the Republican Party of Florida and state taxpayers for eight flights while he was House Speaker.” (He said that was a mistake, and that he would repay the party.) The Times also reported that “Rubio billed the party for more than $100,000 during the two years he served as the state’s House speaker,” and that “charges included repairs to the family minivan, grocery bills, plane tickets for his wife, and purchases from retailers ranging from a wine store near his home to Apple’s online store.” (Rubio said that the expenses were all related to party business.)

Rubio is about to go through a period of much more intensive media scrutiny. Complaining about media bias won’t be enough to get him through it."
http://www.newyorker.com/news/news-desk/yes-marco-rubios-finances-are-a…

Who won? I'm guessing the democratic party and Hilary Clinton!

Who lost I'm guessing (ok & hoping too) all the Republicans for putting on again a shameful display of why none of their candidates for POTUS is really fit for that thigh office or even a whole number of less high ones.

It is worrying that Trump and Carson still seem out in front as the"lead contenders" here. I cannot see either of them as POTUS but its looking increasingly likely one of them will be the Repub nominee which is already too close for comfort to that. OTOH, there's still such a long way to go in the US election process which seems a colossally drawn out and obscenely expensive circus to this outsider. So much can and will still happen - hopefully starting with a thining out of the worse candidates in the field here. (So many of those! Such terrible possible contenders!)

I haven't seen this latest debate nor do I feel particularly inclined to (if I even could) or think in the end its going to matter that much and make that much difference. Am I wrong about any of that?

Thigh office = high office natch. Oops. I must be having flashbacks to the other Clinton!

Who was like Obama a pretty reasonable President albeit with some flaws and not perhaps as could as he could've been who was also polarising and staggeringly hated on & hounded by the far Right wing partisans who basically behaved like tantrum throwing screaming kids - or worse. The more things change ..