The Brain: An Illustrated History of Neuroscience

In 1817, Karl August Weinhold had a go at a real-life Frankenstein's monster -- only in his version he uses a cat. The German scooped out the brain and spinal cord of a recently dead cat. He then pured a molten mixture of zinc and silver into the skull and spinal cavity. He was attempting to make the two metals work like an electric pile, or battery, inside the unfortunate cate, replacing the electrical of the nerves. Weinhold reported that the cat was revived momentarily by the currents and stood up and stretched in a rather robotic fashion!

Weinhold's reanimated cat was just the tip of the iceberg. In those days, the same days during which Mary Shelley wrote Frankenstein

, the forerunners of modern neuroscience were reanimating all sorts of animals 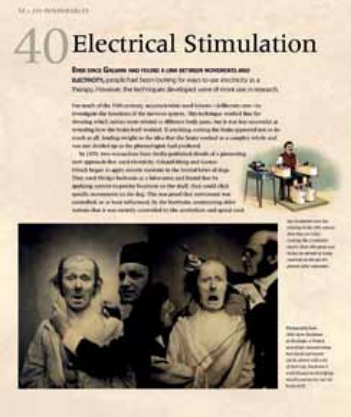 by the prolific Tom Jackson (see list below) mentions the cat story in a small sidebar, but several of the 100 moments in neuroscience relate to this sort of early scientific activity. The idea of the book is to put a large topic, in this case the history of neuroscience, into 100 bite sized pieces (with a 101st item at the end, a sort of technical summary) in chronological order. The result is a very browsable and fascinating book, an educational and entertaining coffee table item, even a good gift idea.

I know something about neuroscience and brain evolution, and even a bit about the history of this research, and I found most of the entries to be reasonable, well researched, and accurate. There is sufficient debunking of some of the bad ideas (about race, IQ, etc.), though I would like to have seen Jackson's treatment of lateralization to have been a bit more probing and nuanced, since that is one of the areas where pop culture has overstayed its welcome. Still, the book is scientifically accurate, not to deep yet not a gloss.

One of the neat features of the book is a giant pull out unfoldable wall poster that is a timeline of the history of neuroscience. I'll probably give that to my wife for her to hang in her biology classroom, especially since she teaches a fair amount about brains and intends to expand on that teaching over the next couple of years.

The other side of the foldout timeline is a set of optical illusions, including the blind spot test, the arrows affecting the apparent length of the line test, and a lot of the other usual illusions, all very well done with quality presentation and printing.

There are bits at the beginning and end of the book (including item 101, mentioned above) that serve as reference material. There is an index, though it is not dense (for example, having noted the cat story I use above, I tried to look it up in the Index but couldn't find it). Also as an appendix is a explication of several key open questions in neurobiology (the "Imponderables"). Also, references are supplied.

The illustrations are excellent throughout.

is for anyone interested in science, especially neuro. If you cover this topic in your High School or Middle School classes, it is a good book to have in your library. It would make an excellent gift for the science-oriented person you know, especially since it is just out and they won't have it yet.

This is part of the Ponderables series

Other books by Tom Jackson:

Why did Weinhold sue the poor cat? What did it ever do to him?

He used quite a few cats, mostly kittens, in his research.

The mention of molten zinc and silver is interesting. I have to believe the source gets it wrong, since it couldn't act as a source of electrical energy with the two conductors in direct contact. It could supply plenty of thermal energy however. Zinc melts at 787 °F, silver at 1,763°F — and the mixture doesn't appear to be a eutectic:

I did a bit of searching on "Karl August Weinhold" but I didn't find much. Guess I'll have to check out the book.

Bit of a tangeant here but this reminds me of this :

recent Lateline segment which screened co-incidentally the other night too.

Christopher #3: It is widely reported, or repeated at least, to have happened, (the zinc thing). But I'm pretty sure this guy's "science" was somewhat questionable. It would be interesting to track it down.

It is pretty clear the guy knew how to make batteries. Perhaps he had a method that worked.