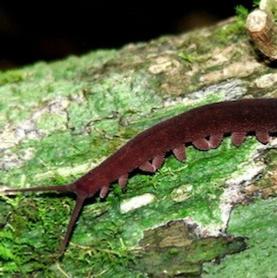 A new species of velvet worm (Eoperipatus totoros) is the first to be described from Vietnam after its discovery in 2010. This 2.5 inch long worm is distinguished from other velvet worms by hairs with unique shapes that cover its body.  These animals are difficult to find and study because they are usually hiding in the moist soil to prevent dehydration. However, during the rainy season, they exit the soil and can be spotted. What is neat about these worms is that they hunt by spraying a glue-like substance from two appendages on their backs that is composed of proteins that immobilize prey. Velvet worms diverged around 540 million years ago and have not changed significantly since then.

Who knows, maybe this glue-like substance can be synthesized for use in medicine as a new surgical glue...