Dr. Clara do Amaral is a postdoctoral fellow at the University of Dayton in Ohio where she studies freeze tolerance in frogs. She received a Research Recognition Award from the Comparative and Evolutionary Physiology section of the American Physiological Society at the 2017 Experimental Biology meeting in Chicago, IL. She prepared this award-winning guest blog entry to describe her interesting research: 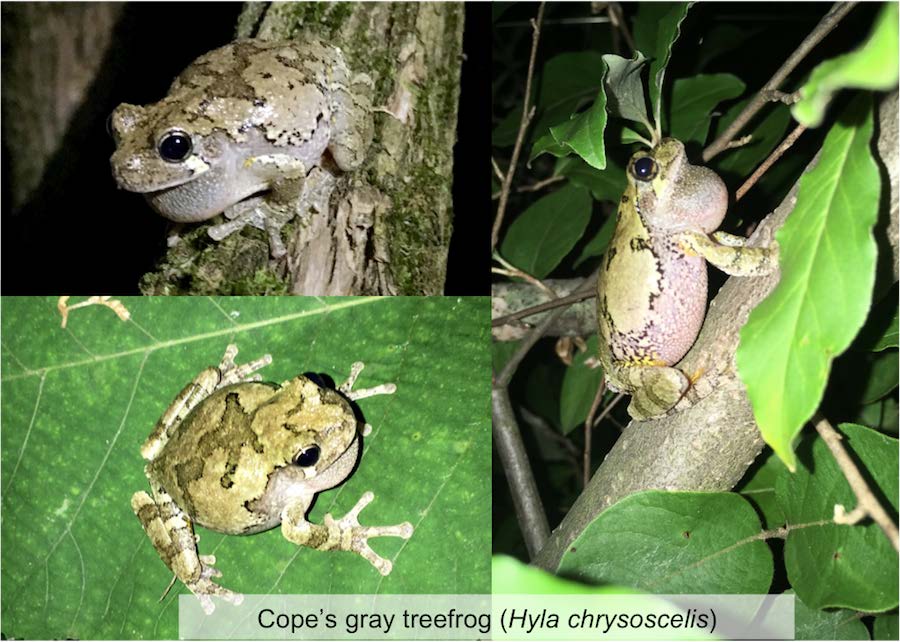 The Cope’s gray treefrog is a small frog that occurs in the eastern United States. You can find it sitting on the trunks and branches of trees, and you can hear it calling from the edges of ponds during warm summer nights, especially after a rainy day. This frog belongs to a very exclusive group: the group of frogs that can be frozen and survive.

Yes, you read that correctly. Frozen AND survive.

Freeze-tolerant frogs survive freezing of up to 2/3 of their body water. During this time they have no heartbeat and no brain activity. They won’t even breathe. The Cope’s gray treefrog can stay as a “frogsicle” for several days a time, surviving temperatures as low as 23 degrees F.

If these frogs are in an environment where temperatures drop below 30 degrees F, something amazing can happen: their body temperature drops and they will freeze. Freezing is very stressful for most organisms. For example, ice can form inside blood vessels, rupturing them, in a similar way to what happens when the water pipes in your house freeze and burst. Ice grows outside of cells, and may cause cells to shrink too much, compromising their function. Freeze-tolerant frogs have evolved strategies to tackle many of the problems caused by freezing. But we are getting ahead of ourselves; let’s backtrack a bit.

During fall, Cope’s gray treefrog stores in its body large amounts of a chemical compound called “glycerol”. Glycerol was fairly popular in the 1920’s as an antifreeze for engines. Glycerol in this frog works as a cryoprotectant: it helps to protect the frog’s cells and tissues from the stresses of freezing and thawing; it works a bit like an antifreeze by reducing the amount of ice formed in the body. So, by the end of fall, we have frogs full of glycerol ready for winter. But that is not all.

When an ice crystal touches the skin of this frog, and temperatures are low enough, the frog will freeze. When this happens, this frog produces yet another cryoprotectant: glucose. Glucose is the major sugar found in the blood of all vertebrates (that includes you). This sugar is released from glycogen (stored in the liver) and is distributed throughout the body as, at the same time, ice is spreading throughout the body of the treefrog. It is a race against time because, at some point, the frog will be so frozen that no blood will remain flowing and no more cryoprotectant can be distributed.

In our laboratory we are interested in understanding how the genes of the Cope’s gray treefrog relate to its physiology and they allow it perform such an extraordinary feat. We investigated how low temperatures and freezing changed gene expression in the liver of the Cope’s gray treefrog. As the liver is the main source of cryoprotectants, we hypothesized that genes related to cryoprotectant production and stress tolerance would be preferentially expressed (“turned on”) during fall and winter. We used a sequencing technique called “High-throughput RNA sequencing” to see which liver genes were “turned on” and we compared gene expression among frogs that were kept under warm conditions (simulating summer), cold conditions (simulating fall), and frozen. Contrary to what we expected, expression of genes related to glycerol production was unchanged from warm to cold conditions. On the other hand, a gene related to glucose export from the liver was highly expressed in frozen frogs, probably helping to distribute this cryoprotectant to other tissues. Several genes involved in protecting proteins from damage and repair DNA were highly expressed in cold and frozen frogs.

These results suggest that liver genes are highly responsive to low temperatures and freezing. Adjusting expression of genes appears to be an important strategy for achieving some responses (stress tolerance) but perhaps not others (glycerol production). This study improves our understanding of one of the most extreme adaptations of the natural world.

Furthermore, by unraveling the mechanisms behind natural freeze tolerance we may be able to improve our ability to cryopreserve human tissues and freeze human organs to be used in transplants, something currently not possible. Finally, by understanding the physiology of animals like the Cope’s gray treefrog, human cryosleep and deep space exploration may be closer to reality than science fiction.