A couple of the shinier stones I've come across on the web lately:

Somatosphere is a new blog about medical anthropology (think sociology and politics of medicine, only with a bit more critical distance; it's about how culture shapes medicine) written by McGill University post-doc Eugene Raikhel and others. They're just getting started but already have some nice posts on a 1966 ad for Ritalin as a Mother's-little-helper antidepressant, a "Critical Neuroscience" workshop at McGill, and some gleanings from the web that included some stuff I didn't run across elsewhere -- an increasing rarity, it seems, in the echo-chamberlike science blogdom. Medical anthropology is a rich but overlooked field. Perhaps this will raise its profile a bit. (Conflict-of-interest disclosure: I know Raikhel because he use to fact-check my pieces when he freelanced in that role for Scientific American, and he has aided me with research now and then on articles about things like brains and roller coasters. So, knowing he's a very sharp cookie, I must confess I'm inclined to think well of him and his efforts.) 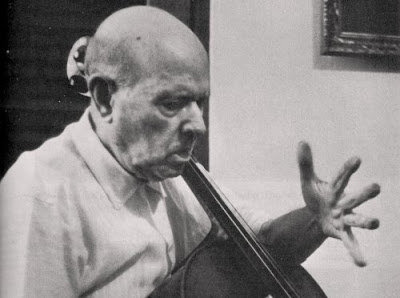 On an Overgrown Path is a wonderful blog about music that has recently put up great posts about (among others) searching for Pablo Casals, composer Ernest Bloch, the death and transfiguration of the music journalist, pianist Bill Evans, the amplifcation of classical music, and a mess of beautiful music, including a Bach-Coltrane merger, from French saxophonist Raphael Imbert. Hat tip to the New Yorker's Alex Ross, who keeps his own fine blog at The Rest is Noise, for his link to this splendid site.

Alex Ross on how the web is good for classical music

Music is alive and well I long ago grew weary of complaints about the demise of classical music -- a demise based on dropping sales and and market share. Similar complaints had been voiced about tennis, another thing I love. In both cases the hand-wringing about falling ticket or record sales or…

Why So Serious? How the classical concert grew so stiff

Alex Ross, the New Yorker's wonderful music critic, on the strange and amusing history of how the classical music concert assumed its present form -- which, as he notes, often seems to constrain rather than unleash the music.

Alex Ross brings my attention to a recent letter in Science: "...Watanabe and Sato [Behav. Processes 47, 1 (1999)] have shown that Java sparrows can discriminate between Bach's French Suite no. 5 in G minor and Arnold Schoenberg's Suite for Piano opus 25. The birds were also able to generalize new…

The Week's Best: Evolution, healthcare reform, clever apes, and Cheever in his undies

My name is Lance Burnet and i would like to show you my personal experience with Ritalin.

I am 56 years old. I have taken Ritalin for 30 years. I have been diagnosed with a mild form of narcolepsy. I use 4 (10 MG ) pills per day. The drug ahs worked wonders and eliminated the drowsiness and sleep attacks. My concern now is the length of time I have been on it. When taking a "drug holiday" it seems like my symptoms are worse.

I have experienced some of these side effects-
rebound effect when dosage wears off.

I hope this information will be useful to others,
Lance Burnet