The Bluenose Marathon and Youth Run

Sorry for the absence the past few days - I am just back from the Bluenose Marathon Weekend in Halifax, Nova Scotia.  My girlfriend and I have a lot of family and friends in Halifax, so the race was a great excuse to spend the May long weekend visiting with them.  Daun and I ran in the 10km and Half-Marathon respectively, and 12 members of my extended family from 3 different generations walked or jogged the 10km.  This is my first time racing in the Bluenose, but last year I volunteered in the Youth Run, which was at least as much fun as racing, if not more so (and not just because of the delayed onset muscle soreness I'm still experiencing from the downhills).  Below is the full-text of my post from last year, explaining why I think that events like the Bluenose can be such a positive experience for kids and adults alike. 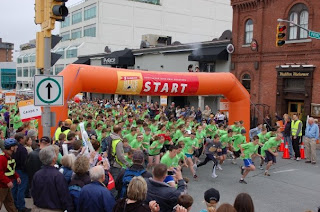 On your marks... GIV'ER! (Photo courtesy of Andrea Mosher)

I was in Halifax this past weekend and was fortunate to be involved with a terrific event that anyone interested in physical activity should know about. It is called the Bluenose Marathon Youth Run, and it is awesome!

The Bluenose Marathon is a road race which takes place in Halifax, Nova Scotia each May. Like many major road races, it includes a full marathon, a half-marathon, and a 10km race. What makes the Bluenose Marathon special, however, is that it also includes a 4.2km youth run, which attracts thousands of students in grades 3-9 from throughout the province. My girlfriend Daun has taken part in several of these youth runs, and this year the two of us ran with a number of students from the elementary and middle school where she taught Physical Education last year. 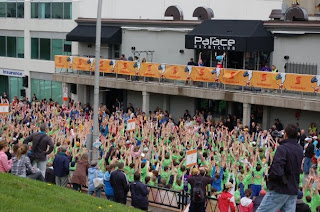 There are too many great things about this event to fit them all into one post. First of all, it's great to see the sheer numbers of people who come out to volunteer and cheer on the runners. The start area was nearly as crowded as at the Boston Marathon earlier this year, and the atmosphere was just as exciting. The kids were all dancing to the pre-race music, doing some aerobics to get warmed up, and getting focused for the journey ahead (I've been told that there was also some pre-race puking from a few kids, but luckily all of the students that I was running with had iron stomachs). Then there is the way that they start the race: "On your marks... GIV'ER!", followed by sheer mayhem as thousands of kids sprint through the start line (keeping track of several 11-year olds running at full speed, surrounded by other kids dressed in identical race tshirts, is quite a challenge!) From start to finish, everything about the race is about participation and having fun, and that's a fantastic trait for any youth sporting event. 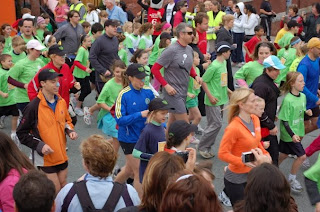 The youth run gets thousands of kids out on race day, which is
terrific. But what's even better is that the kids train for weeks
leading up to the race, with the goal of completing the equivalent of a
full marathon (42.2km) over the course of their training. In fact,
after the race it's not uncommon to hear the students talking about how
this was their first or second or third "marathon". And do you know the
best part? The kids have fun! They have an absolute blast! The kids
run together, they chat, they cover themselves in gatorade at the aid
stations and then stomp on all the empty cups, and they have a
tremendous time doing it. I ran with a group of grade 5 students from
the Halifax Independent School, and
the whole group was very supportive of each other, walking whenever
someone had a cramp, and generally just out for a nice jog and a good
time. 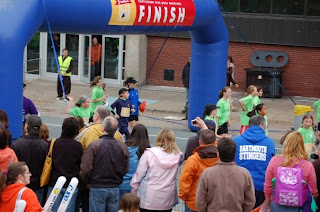 I know that many parents (and unfortunately even some teachers) worry
that something as strenuous as a 4.2km run is "dangerous" for kids, but I
can't imagine that the students would come back year after year if it
were a truly traumatic experience. The kids that I ran with simply
slowed down or took a walk break whenever they needed a bit of a rest,
and as soon as they felt better (which usually only took a few seconds)
they were right back with their classmates. And I can tell you from
taking part, not all of these kids were "natural" runners. There were
kids of all shapes, sizes, and abilities taking part, and there was
absolutely zero emphasis placed on winning (the organizers don't even
bother to record times or placings). The race is not about winning, but
rather having fun and taking part, and that's what I love about road
racing in general. Too many kids get turned off from running at a young
age (for example, an elementary school in Kingston recently turned away
students from the Cross Country Running team if they required a walk
break during training), so its great to see a race make running such a
positive experience for so many students.

Most of the participants in the Youth Run will not go on to be
competitive runners, but almost all of them have seen that physical
activity can be fun, and that's a great lesson for them to learn. This
is not the only road race that has a youth run (although it's by far the
largest youth run I've seen personally), so I'd encourage you to look
for one in your area either for your own children, or to volunteer in
some way. Depending on your child's age, you may want to look into Read and Run programs, which help
students develop a love of reading, and running, all at the same time.
Or just go outside for a run/walk with your kids. Run when they feel
like running, and walk when they feel like walking. As they say at the
Bluenose Marathon, just Giver!

Thanks to Andrea Mosher for the generous use of her terrific
photos! If you are wondering why we all have blue noses in the
pictures, it's because we were running in the BLUE NOSE youth run. :p

I laughed when I saw the picture with the Palace Nightclub in the background. Many calories are expended on the dancefloor of that place, while more calories are probably consumed in the sugary drinks ... an interesting study in the consumption/expenditure ratio happens in that place every Thursday through Saturday!