Most Massive Collection Of Giant Stars Ever Revealed By Hubble (Synopsis)

"The night has a thousand eyes, and the day but one;
Yet the light of the bright world dies with the dying sun." -Francis William Bourdillon

When we look for the brightest, bluest, most massive individual stars, we're restricted to looking nearby, since it's impossible to resolve individual stars at distances that extend much beyond our own galaxy. So how surprising is it, then, when the most massive stars we've ever found aren't in our own galaxy, nor in any of the monster galaxies we've found nearby, but in a small, satellite dwarf of our own: the Large Magellanic Cloud?

The tidal disruption of the Milky Way causes a huge spike in star formation among the neutral gas, and has led to an incredibly rich region of new stars, including dozens of stars over 50 solar masses, nine over 100, four over 150 and the most massive one, R136a1, coming in at an incredible 250 times the mass of our Sun. It's the most massive collection of hot, young stars in the entire known Universe. 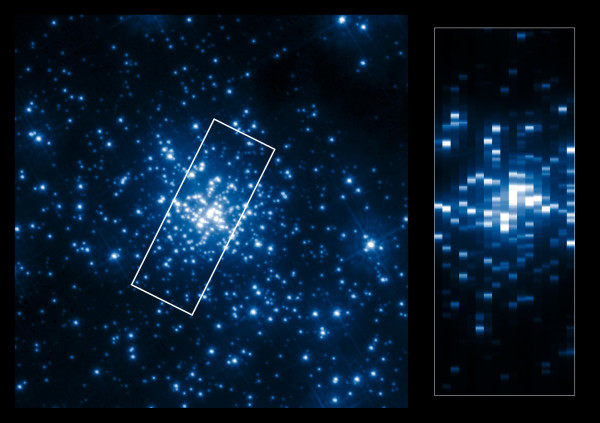 An ultraviolet image and a spectrographic pseudo-image of the hottest, bluest stars at the core of R136. Nine stars over 100 solar masses and dozens over 50 are identified through these measurements. Image credit: ESA/Hubble, NASA, K.A. Bostroem (STScI/UC Davis).

Go get the whole story in pictures, videos, and no more than 200 words over on Forbes!

possible that scientists will get a new hypothesis again in the formation of the solar system ??.

Ethan low low is the metallicity of these gas clouds. Opacity due to metals is supposed bad for very high mass stars, as radiation pressure threatens to outstrip gravitational attraction. I've presumed that the LMC probably didn't have a large amount of star formation (and evolution of the gas clouds) prior to interacting with the Milky Way. Is this borne out by observational evidence?

@Omega Centauri #2: It appears that there's no direct measurement of metallicity for RMC 136a1 (see, for example, the Wikipedia article and references).

It's age and other "internal" properties appear to be computed based on assumption of either solar metallicity or average LMC metallicity.

Doesn't say much for homogeneity, does it?

@See Noknowledge #4: Doesn't say anything one way or the other. Your existence as something other than a big blob of grease isn't homogeneous, but that's entirely irrelevant to the Universe.

Mike, please be kind to greasespots everywhere. They're not as maniacally dumb as See Nowt.